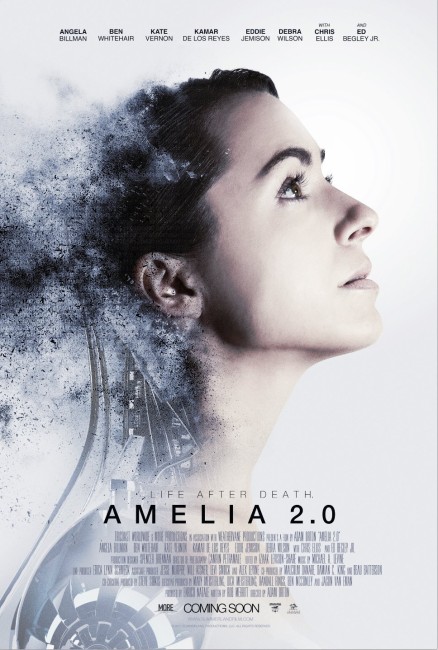 Cedar Rapids, 2021. Carter, a police officer, and Amelia Summerland, a school teacher, are happily married and planning to start a family. Amelia then collapses from a brain aneurism and is rushed to hospital where she lapses into a vegetative state. For the next two years, Carter stays devotedly by her side. He makes an appeal to the tech giant Wesley Enterprises for financial relief in their medical bills. This gets the attention of CEO Paul Wesley who has been looking for a subject for his mind upload process. Carter agrees to allow Amelia’s mind to be uploaded into a computer and then placed into an android body, while her flesh and blood body is killed. Wesley and his researchers go to great efforts to bring Amelia back to life in her new body. They succeed although her memory is erratic and she at first has no recognition of Carter. In the meantime, Republican senator Thaddeus Williams begins a campaign to pass laws to stop mind upload.

Amelia 2.0 was a directorial debut for Adam Orton. The film did some minor play but has not been widely seen.

In the last few years, we have seen a number of films dealing with the theme of artificial intelligence as concerns about such begin to warm up in the real world. These include the likes of Her (2013), The Machine (2013), Automata (2014), Chappie (2015), Ex Machina (2015) Morgan (2016), Tau (2018) and tv’s Westworld (2016– ). Far less prominent have been the number of films dealing the theme of mind upload – whether a human mind can be converted to data and uploaded to a computer or the internet. There have been a handful of treatments but the theme has not fared particularly well on cinema screens before as witness the likes of Ghost in the Machine (1993), Lawnmower Man 2: Beyond Cyberspace (1996), Transcendence (2014) and to some extent Replicas (2018).

The whole mind upload theme is merely waiting for someone to come and set the benchmark for all the other films in fairly much the same way that The Matrix (1999) defined Virtual Reality themes for every film that came after. Sadly to report, Amelia 2.0 is not that film. It makes a fair try but a worthwhile treatment of its themes entail is clearly beyond scriptwriter Rob Merritt.

There are a lot of big issues around Mind Upload – what is a personality inside a machine? In that so much of the emotions we experience are reactions to the outside world, how would such a machine with no biological components experience those emotions? Would it simulate emotions or just be rehashing memories of them that sit in a file somewhere? When humans suffer regularly from faulty memory, how would a machine that is able to hold every memory in a file and expand its knowledge base by connection to the web think? It certainly would not be something that we recognise as human thought any longer.

Disappointingly, it feels as though Rob Merritt has done no reading on the discussions about Mind Upload theme that fills a great many online forums and has simply resorted to a bunch of cliches. The film, for instance, sees little difference between the idea of Amelia 2.0 as an uploaded human being and her incarnated in an android body whereas the two would be very different things. You would think if lifelike artificial bodies were so commonplace you would see them integrated into society more than they are but the only use the future (only five years from when the film was made) can see for them is as sex robots.

After having its title character uploaded to the internet and then downloaded to an artificial body, the film then creates the straw figure of a conservative senator who rallies to ban mind upload on the grounds that it is anti-Christian. The film sees this viewpoint as wrong and even includes a scene near the end where the senator is diagnosed with cancer and is dying and we are clearly are meant to be left with the feeling of “hah, you know perfectly well you could have been uploaded.”

On the other hand, the eventual ending the film opts for is no different from the one espoused by the senator and his conservative Christian worldview. [PLOT SPOILERS]. Here husband Ben Whitehair goes to meet the Amelia android, smuggles his gun in and shoots her and then turns the gun on himself. His reaction was based on the idea that she was not human. We are not given any more insight into his motivation than that, just the suggestion that what she no longer has the essential indefinable quality of ‘humanness’ (whatever they might be).

This is the crashing conceptual disappointment of the film. It is, as Alexei and Cory Panshin argue in The World Beyond the Hill (1989), speaking of Frankenstein’s experiments in Frankenstein (1818), “[he] lit wastebasket fires just to see the flames, and then instead of running and hiding, they threw water on them.” In other words, it is a film sparking an idea and then running away in fear from the conceptual possibilities – no discussion of whether what was in the machine could be considered human, whether some people might want to preserve their lives in such manner, how such a machine might think/feel, just one man deciding on everybody’s behalf because of his own personal disgust that what emerges is no longer recognisable to him that such a discovery should be obliterated. Of course all of this seems entirely oblivious to the idea of what most computer designers would do – create a set of backups, which is exactly what we see in the final coda.