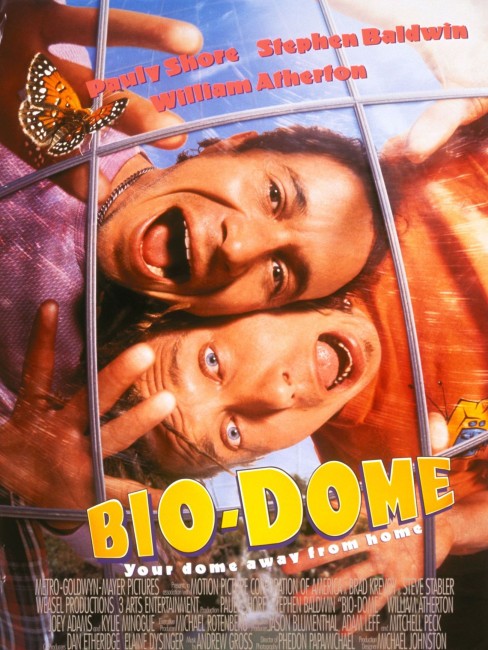 Arizona university students Bud MacIntosh and Doyle Johnson annoy their girlfriends when they try to weasel out of helping clean up the environment for Earth Day. The girls get back at Bud and Doyle by pretending to leave with some other guys. Racing after the girls, Bud and Doyle stop by at what they think is the opening of a new mall while looking for a bathroom. This is in fact a bio-dome that is being sealed as part of an experiment to see if a group of scientists can live in an airtight, ecologically self-sustaining environment for a year. Bud and Doyle are sealed into the bio-dome along with the scientists. After they are discovered, the scientists face the question of what to do with them. The pompous team leader decides to allow them to stay and let the bio-system adjust. Bud and Doyle then proceed to drive everybody else crazy with their inane hijinks, where they gleefully wreck delicate experiments and cause wholesale chaos.

There are few films that one can be automatically dismissed as terrible because of their star – Steven Seagal and Chuck Norris almost certainly; Jim Carrey was like that for a time; and without any doubt it is the case with Pauly Shore who must be the singularly most annoying performer that has ever managed to find employment in a film. It is difficult to find enough adjectives to describe how unbelievably irritating Pauly Shore’s line of perpetual strung-out babble and nonsensical surfer-speak is.

Every single one of Pauly Shore’s films, which include the likes of Encino Man/California Man (1992), Son-in-Law (1993), In the Army Now (1994), Jury Duty (1995) and The Curse of Inferno (1997), are awful for the very reason in that they pander to Shore’s inanities. Pauly Shore is the central focus of his films and everybody else present exists as either objects of lust, buddies or mostly as uptight people that Shore’s idiocies inevitably annoy and/or loosen up.

Bio-Dome is laughably a Pauly Shore film that tries to develop an environmental message. About half the film consists of Shore and Stephen Baldwin conducting moronic antics – partying in the Bio-Dome, smashing up labs, biting the other’s corns off, catching rare butterflies on giant flypaper, getting high on nitrous oxide. Shore pesters Dara Tomanovich with inane one-liners – “Are you tired? You’ve been running through my mind” or “Did it hurt when you fell from Heaven?”

The film takes the obnoxious attitude that it is fun to wreck a bio-dome experiment on the grounds that the scientists are tightasses who take themselves too seriously. Indeed, in its celebration of such a moronically disagreeable attitude, Bio-Dome is a film that becomes almost unwatchable.

This is compounded by some absurdly hypocritical attitudes – the film has Pauly Shore and Stephen Baldwin with tongues on the floor over the girls in the dome, yet it condemns the two girlfriends on the outside for being tempted to go with other guys and not waiting for Shore and Baldwin to get out. In its second half, the film suddenly turns around and tries to deliver a serious message. It then preposterously has Pauly Shore and Stephen Baldwin, after wrecking the dome, getting their act together to try and be the heroes who save the experiment. The two cute scientist girls come onto them and in surely the film’s most absurdly unbelievable turn, the two jerks spurn the girls after having spent the rest of the show slavering over them.

While the film makes the careful point to turn the attitudes of irresponsibility in the first half around, there seems a clear two-facedness in the way that it approached the earlier scenes where we were made to participate in these (by virtue of watching the film) and regard as hilarious its smashing up the experiment on the sole grounds that doing so was fun.