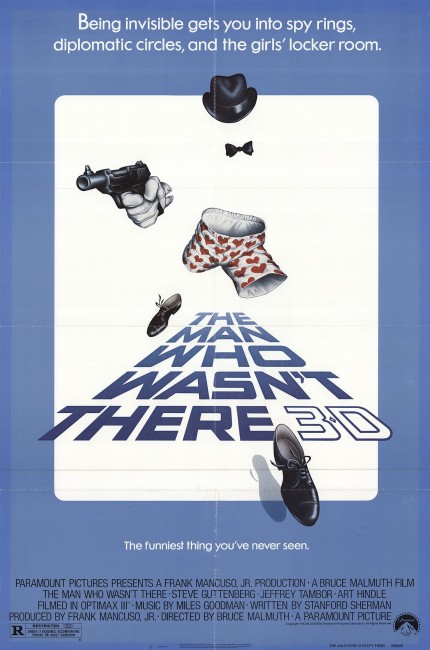 Sam Cooper, an ambassadorial attaché in Washington, is late for his own wedding. He is readying his tuxedo when an invisible spy bursts into the room and gives Sam a sphere containing several phials of invisibility serum, before pursuing thugs shoot him. Possession of the sphere now leaves Sam the target of every international spy agency and he is forced to go on the run and use the serum to make himself invisible in order to stay alive.

The Man Who Wasn’t There was made to capitalise on the mini 3D revival fad of 1981-3 that came about after the surprise success of the execrable Western Comin’ at Ya (1981). This was a fad that had the distinction of not producing a single decent film – see the other genre likes of Friday the 13th Part III in 3D (1982) (which also from producer Frank Mancuso Jr), Parasite (1982), Amityville 3D (1983), Jaws 3D (1983), Metalstorm: The Destruction of Jared-Syn (1983), Rottweiler/Dogs of Hell (1983), Spacehunter: Adventures in the Forbidden Zone (1983) and Treasure of the Four Crowns (1983). Unlike these others, The Man Who Wasn’t There was not even shot in 3D originally but was made in 2-D with additional scenes being shot later to make it into a 3D film. This at least gives the film one advantage over most of these other 3D films to emerge from the fad in that it is without many of the gimmicky shots where items keep popping out of the screen into audience’s faces.

Seen in 2D on tv today, The Man Who Wasn’t There is a feeble and inconsequential Invisible Man effort. The plot serves, one supposes, adequately to get from incident to incident but the humour is so lame that to call it comedy would be a misuse of descriptive vocabulary. It is all pitched at a lowbrow level – the film cannot, for example, resist the opportunity to set up an excuse to have the invisible man walk into girl’s locker-room.

The opticals are very cheap. Certainly, it is nice to see an invisibility film where the serum for once doesn’t automatically make the person’s clothes invisible too but this would have had more credibility if the backs of the pants and bras being worn by invisible people could be seen too – but while one can see the fronts and sides, the backs have simply and obviously been blanked out by the blue screen bodysuits that the actors are wearing.

Steve Guttenberg, who for some inexplicable reason was considered a star in the 1980s in the likes of the Police Academy series, Cocoon (1985) and Short Circuit (1986), gives another incessantly wimpy performance – in fact, this was the first film that Guttenberg ever starred in. Charlie Brill’s role as an Indian ambassador verges on the racially insulting.

There are some claims that the film was originally to have been directed by Larry Cohen, the cult director of films like It’s Alive (1974) and Q – The Winged Serpent (1985). The reins were taken up by Bruce Malmuth, whose only previous film had been the Sylvester Stallone vehicle Nighthawks (1981). Malmuth subsequently went onto make the likes of the kidnap thriller Where Are the Children? (1986), Steven Seagal’s Hard to Kill (1990) and the Dolph Lundgren action vehicle Pentathlon (1994).

The film is no relation to and should not be confused with the Coen Brothers’ film noir spoof The Man Who Wasn’t There (2001).