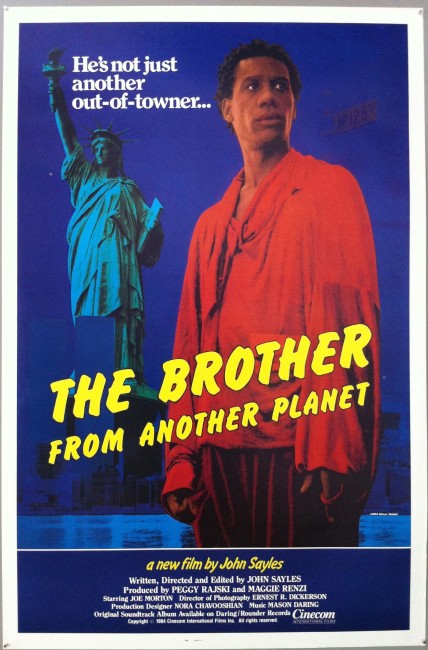 A mute, black alien escapes from slavery. On the run, it crashlands on Earth. In a Manhattan bar, the alien is accepted by the locals who find him a place to stay and a job after he demonstrates the ability to heal electronic equipment simply by touching it. There he tries to make sense of human culture while falling for a beautiful singer. Soon however, two tall, sinister alien slavers arrive to recapture him.

The Brother from Another Planet jumps on the alien visitors trend inspired by Steven Spielberg and E.T. – The Extra-Terrestrial (1982). (John Sayles had signed on to write the script for Steven Spielberg’s abandoned alien visitors film Night Skies just before this). Here, Sayles’ spin is to take E.T. out of the suburbs and into Harlem. It is E.T. with a hip urban social conscience – the alien here is not so much a wide-eyed anthropomorph come to touch the empty lives of the young at heart but akin to Peter Sellers’s Chauncy Gardener in Being There (1979). Joe Morton (who in his subsequent bit parts has never been better than he has here) is written as a wide-eyed Candide set up to wander through the film in mute, blank-faced deadpan taking on the absurdities of our culture – asked to point the way to the subway he jerks his thumb at the floor; buying a record he throws the vinyl away but keeps the picture on the sleeve.

John Sayles writes and the talented cast provide a series of monologues that are extremely funny – the secretary on the phone complaining about the guy who wants a relationship with her after having gone out with her five times, or the encounter between Joe Morton and two guys on their way to a self-actualisation conference. The most hilariously bizarre feature is David Strathairn and John Sayles himself who play the two aliens slavers, like epileptic fish out of water with their lumbering, jerky gait and attempts to blend in familiar mannerisms – entering a bar and ordering two beers on the rocks.

The Brother from Another Planet, is never more than a series of appealing vignettes. It does take time out near the end to deliver an unnecessary anti-drugs lecture but it is hardly a misstep in its otherwise perfectly charming and whimsical stride.

John Sayles’ one other genre outing as director is The Secret of Roan Inish (1994), a venture into Irish myth and legend. Before becoming a director here, Sayles made money by working as a scriptwriter and has credits on Roger Corman produced films such as Piranha (1978) and Battle Beyond the Stars (1980) and for other genre films of the era like Alligator (1980) and The Howling (1981). He has returned to scriptwriting over the years where he has a well-known reputation as a script doctor and has other genre credits to his name that include Clan of the Cave Bear (1986) and The Spiderwick Chronicles (2008). Sayles also produced The Man Who Killed Hitler and Then The Bigfoot (2018)..