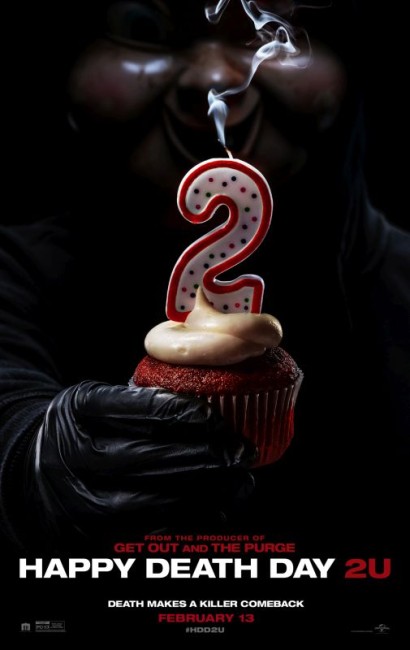 Ryan Tran, the roommate of Carter Davis, wakes up on the morning of March 19th and heads to the physics lab just as the dean storms in to shut down his quantum experiment. Ryan is then stabbed by the Babyface killer but wakes up to repeat the events of the day all over again. When he tells Tree Gelbman what is happening, she realises that his experiment was responsible for the timeloop she was caught in. In the lab, they grab and unmask the Babyface killer only to find it is another version of Ryan. Ryan sets out to close the loop but as the dean enters to shut things down again, a fight ensues and causes a feedback. Tree wakes up in Carter’s room on the 18th, caught back in the timeloop again. In reliving the day, she discovers that some things have now changed – that Lori is not Babyface, that Carter is now involved with Danielle. She goes to the lab where Ryan and his fellow physicists work out that she must have been knocked into a parallel universe. When she discovers that her mother is alive, Tree decides that she wants to stay in this timeline. However, they cannot work out which formula is the one that will close the loop. The only solution is for Tree to commit suicide multiple times and repeat the day over and over to test all the variables. However, as they prepare to close the loop, other problems get in the way from the dean trying to shut them down to another lurking killer wearing the Babyface mask.

I didn’t much care for Happy Death Day (2017). It was a variant on Groundhog Day (1993) with someone caught in a timeloop and forced to live the same day over and over. This was given a gimmicky spin in being wedded to a slasher movie plot in which Jessica Rothe kept being pursued by a masked killer and had to work out which of the people around her it was. It proved a reasonable success for Blumhouse and director Christopher Landon. Happy Death Day 2U was a sequel.

Happy Death Day does not exactly lend itself to a sequel – I mean, how many more variations can you do on having a person living the same day and the same events repeating themselves? This comes up against Blumhouse who have yet to produce a film they weren’t willing to potentially sequelise. Due to my indifference to the original, I didn’t have any high hopes for the film. Thus it was a surprise when I actually found Happy Death Day 2U a more enjoyable film than the first film was.

First off the bat, you have to commend Happy Death Day 2U for taking the premise of the original and placing some ingenious twists on it. It opens on Phi Vu, who played the minor character of Israel Broussard’s roommate in the original and now becomes the initial point-of-view character as he wakes up, goes through his day only to be stabbed by the Babyface killer and wake up and repeat. He comments on what is happening and Jessica Rothe realises the same happened to her and to trace this all back to the physics experiment Vu is conducting. His attempts to set it right only to throw Jessica Rothe back into the timeloop but in an alternate timeline where things are different – Lori is not the killer, her mother is alive. We even get a science-fictional explanation of what is happening – replete with references comparing the situation to Back to the Future Part II (1989) and Inception (2010).

And okay I have a few problems with the film’s alternate timeline – the wider the point of divergence (like the death or survival of Tree’s mother), the more different events in the present are going to be. Furthermore it would take a very wide divergence for one person to fundamentally change their nature – ie. the psychology that makes them a killer or not. It also seems highly improbable that an entirely different person would just pick up the mask and put it on and start killing on exactly the same day and targeting the same group of friends as in the other timeline. There are also scripting loose ends – it is never explained, for instance, why we end up with a duplicate of Ryan.

However, that doesn’t matter so much as the sheer good fun the film has with its premise. The slasher movie aspect that the original played into is of less importance than the comic possibilities of the alternate timeline. Jessica Rothe’s fury at finding herself stuck in the same day again is hilarious. Even funnier are the scenes when she decides that the only way they can test the formula out is for her to keep committing suicide and then going back to convince the team all over again (although I kept wondering how someone who has no basis in the sciences could memorise a complex series of formulae).

Even more intriguingly, she decides that she wants to stay in the alternate timeline because it is preferable to the one she came from. It does get a bit silly at times – especially a scene where Rachel Matthews plays a blind French girl in order to distract the dean – but mostly this comes out far more ingeniously than its predecessor. The mid-credits sequence also sets things up for a further sequel.