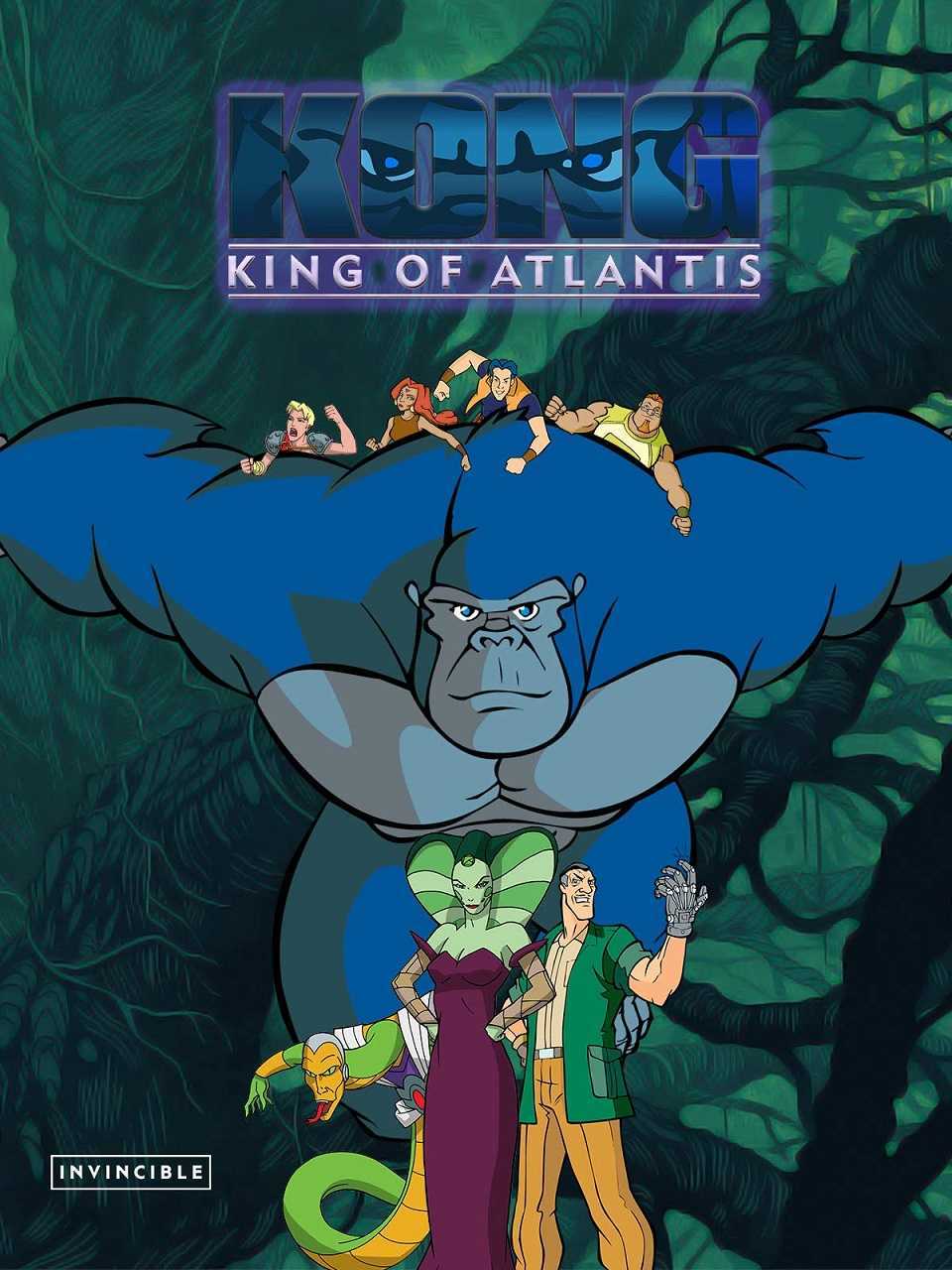 On Kong Island, Jason Jenkins has a cyber link that allows him to enter and take control of Kong’s mind. He and the shaman girl Lua argue over getting Kong’s aid – she concerned about the coming eclipse, Jason about wanting to use Kong to rescue animals from tar pools that are rising all over the island. Lizard creatures from Atlantis emerge from a pit. They persuade Kong that he is the rightful king of Atlantis and to come with them to reclaim his crown. The others need Kong’s help to move the sundial back before the eclipse occurs otherwise this will allow Atlantis to rise again. They follow Kong through the portal. There they join the Atlantean rebels as they try to stop Queen Reptila from crowning Kong, which will allow her to control Kong’s mind.

Surprisingly, there were two attempts made to spin Kong off as an animated tv show, first with the Japanese The King Kong Show (1966-8) and then the US made Kong: The Animated Series (2000-1). This latter had Kong survive his fall and return to Skull Island where he became the best friend of Jason Jenkins who had a cyber-link with Kong where the two of them fought a mad scientist and assorted monsters on a weekly basis. Forty half-hour episodes were made. This was a film spinoff from the tv series released to coincide with the Peter Jackson remake and was followed by a further film Kong: Return to the Jungle (2006).

The film is cheaply animated with most of the work having been shipped out to South Korean animation houses. It is not long into the film before one is realising what a completely nutzoid variation on the King Kong story this is – even more ridiculous than the Japanese King Kong Escapes, which pitted Kong against a giant robot copy of himself, or King Kong Lives and its hysterical giant pacemaker operation. Kong is now a cute cuddly good guy. He even has a cyber link that allows his BFF Jason to take over his mind. Jason also has a human best friend who wears a football jersey throughout and is wont to peppering his conversation with terms like “dude” and “bro”.

There’s a demented plot about lizard people from Atlantis trying to persuade Kong that he is their king – we even see Kong being outfitted with giant robes (by firefly costumiers!) and a crown made for his head. Everyone has to go to Atlantis to bring Kong back so that he can move the sundial into position before the eclipse is over, which will stop Atlantis from rising again.

It is hard to describe how demented it is watching a film that features scenes where the hero and heroine are tugging at Kong’s giant paw while having a song fight about which of them Kong will aid. There’s another song number as Kong is outfitted in his robes and a duet as the hero and heroine are locked up in a cage. The film ends with Atlantis vanquished and everyone returned home where Kong has received a valuable life lesson: “Kong has learned he doesn’t have to prove himself to anyone other than Kong.”