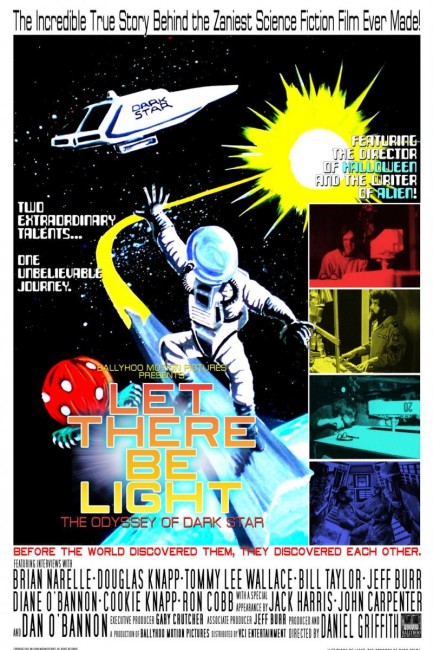 Let There Be Light starts with the introduction of the two key creative players – John Carpenter and Dan O’Bannon – and covers their backgrounds and how they came together at the legendary University of Southern California film school in the late 1960s. It was a turbulent period politically in the US, which some of the interviewees talk of how this bled into what they were trying to do. The turning point seemed to be when Carpenter wrote, edited and scored the short film The Resurrection of Bronco Billy (1970) and this won an Academy Award for Best Short Film but he and the creative people ended up losing ownership of the film due to USC rules on copyright, while someone who was not even associated with the production claimed the award.

Carpenter and O’Bannon conceived Dark Star and began filming it using the USC facilities and equipment. Production on the film took three years with they ducking in and around the facilities not always with official permission. Defying the USC copyright rules, they ended up stealing the print and selling it to producer Jack H. Harris, the man who made The Blob (1958) and other films. Harris gave them $60,000 to shoot new scenes to pad it out to feature-length. (The USC never deigned to pursue any claim of ownership of the film due to the subsequent fame Dark Star brought to the school).

Surprisingly, Let There Be Light does not directly interview the two key players – John Carpenter and Dan O’Bannon. O’Bannon died in 2009 so his absence could be excused. There is brief archival footage and some audio of him, while most of his side of the story is provided by his wife Diane (who did act as a set assistant on the film). There is some audio interview of Carpenter used throughout but he was not filmed for the documentary.

This leaves the bulk of the film’s interview material to be handled by people who were on the periphery of the production such as visual effects consultant Bill Taylor, associate art director, later director, Tommy Lee Wallace and an aging Jack H. Harris. Indeed, the only member of the four-person cast who relents to be interviewed for the film is Brian Narelle (who played Doolittle, the crew member who surfs down into the atmosphere at the end) and also introduces the film.

You do get the impression that Daniel Griffith was stretched for interview subjects as we get contributions from Jeff Burr, the director of From a Whisper to a Scream (1987) and Leatherface: Texas Chainsaw Massacre III (1990), who wasn’t even a USC student until some years after Dark Star had been released (but is a producer of Let There Be Light). Despite their absence on screen, the personalities of Carpenter and O’Bannon write themselves all over Let There Be Light. O’Bannon is seen as the quintessential angry young man and more than one person comments on how the character of Pinback is essentially that of O’Bannon himself. Carpenter is seen as a much more studious, cooler customer.

The film is filled out with numerous anecdotes about the making of Dark Star. There are the amusing stories about how the chest apparatus for the spacesuits were simply reconditioned muffin trays. Brian Narelle discusses at length the shooting of the scenes where he goes outside the ship to talk to the bomb and his inability to breathe inside the spacesuit that had been designed for him, which necessitated that the helmet be taken off so he could catch his breath and cool down, meaning that he could only deliver about one line of dialogue at a time. Dan O’Bannon, in one of his few interviewed moments, talks about how the computer monitors were inspired by George Lucas’s THX 1138 (1971) and these in turn prompted Lucas to hire O’Bannon to design the monitors for Star Wars (1977) after seeing Dark Star. He also recounts how Lucas criticised the cheapness of the beach ball alien and was not happy with O’Bannon’s response.

Let There Be Light fearlessly delves into the various fallings out that occurred during the making of the film. There is discussion of Carpenter and O’Bannon’s dislike of producer Jack H. Harris but the film skirts around the edges of the issue without ever coming out and putting its finger on what it was all about. (Carpenter confirms the legendary rumour about O’Bannon including the phrase “Fuck You Harris” on one of the computer monitors).

More is dwelt on the falling out between Carpenter and O’Bannon. Carpenter intriguingly comments (of O’Bannon): “[He was] someone who only wants to undermine me as a director”. Others involved in the show speculate about how the production was essentially one with two captains. Again, the documentary covers the dispute without fully putting its finger on it. The impression one gets is that O’Bannon felt slighted when Carpenter took all the credit for his equal contribution. O’Bannon’s wife goes so far as to accuse Carpenter of going on during his later directorial success to make projects that were originally conceived by O’Bannon.

Let There Be Light covers the Dark Star story well and in great detail. The only complaint you could make is that nobody has spellchecked the title cards where we get misspellings such as ‘dissention in the ranks’, ‘comaradery’ and ‘difficutl’.