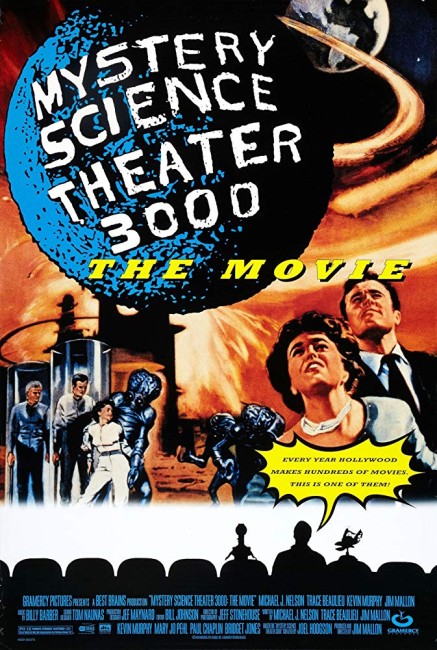 The crazed Dr Clayton Forrester keeps Mike Nelson a prisoner in an orbiting satellite where, as an experiment in driving someone insane, he is forcing Mike to watch bad science-fiction films. Mike and the station robots are now forced to watch ‘This Island Earth’, which they try to cope with by keeping up a running commentary of wisecracks.

Mystery Science Theater 3000 (1988-99) began as a Z-movie late-night tv show where the hosts would interject at various points throughout the screening to crack one-liners and make derisive jokes about the film. As with the similarly formatted Elvira show, the popularity of the series eventually outgrew the tv screen to spill into movie theatres. The making fun of bad movies that the show bases itself on is more an exercise in fashionable sarcasm. As with the target made of This Island Earth (1955) here, it is an undiscriminating sarcasm that ignores any virtues or artistic merits that a film may have and is founded solely around deriving humour out of the less-sophisticated effects and corniness that dialogue has or may appear to have when isolated out of context.

The sad truth that Mystery Science Theater 3000: The Movie seems to miss is that This Island Earth is not a bad science-fiction film up there with Robot Monster (1953) or Plan 9 from Outer Space (1959). In fact, in what seems to insult one’s intelligence, This Island Earth is a far better film than Mystery Science Theater 3000: The Movie is.

This film only has a series of mostly lame, occasionally amusing, jokes going for it. It does not have anything appreciable in the way of a plot – merely a slim premise that is a springboard to allow it to make its gags and which it occasionally, half-heartedly remembers to get back to. For all its laughing at the effects of This Island Earth, the effects that the film offer up here having been made forty years later do not seem any more sophisticated.

There seems something objectionable in the way the film is put together – it is a film that uses another entire film as its substance and then spends the entire time deriding it. The effect is not unakin to being forced to sit in a theatre with a loudmouth who insists on talking the entire way through a film.

The series later underwent a revival as Mystery Science Theater 3000: The Return (2017- ).