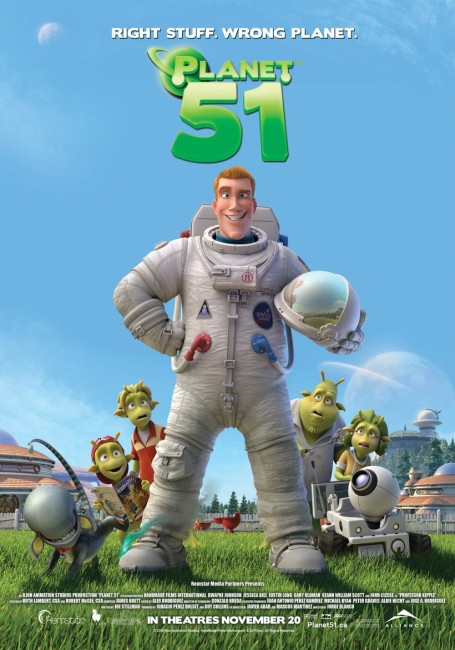 In the town of Glipforg on an alien world, the teenager Lem apprentices at an observatory and tries to get people excited about worlds beyond. His best friend Skiff works in a comic-book store and loves the stories of invading alien monsters in the movies and his comics. Suddenly, a NASA shuttle lands in backyard of Lem’s parents and astronaut Charles T. ‘Chuck’ Baker emerges. His appearance scares everybody and Chuck flees. The military under the aggressive General Grawl quickly surround the house and impound the shuttle. Lem finds Chuck hiding at the observatory. After realising that he is not a monster, Lem grants him shelter in his room at home. Meanwhile, General Grawl has been drumming up fear about alien invasion and the townspeople being taken over and turned into zombies. Through all of this, Lem tries to help Chuck get his shuttle back from the military so that he can return to his orbiting ship before it automatically returns to Earth in 72 hours.

Planet 51 is a debut entry from newcomer Spanish animation company Ilion Animation Studios. Ilion enter a marketplace that is already crowded by hot competition, with Disney, Pixar and DreamWorks at the forefront and other new studios like Blue Sky Studios, Illumination, Vanguard Animation and Sony Pictures Animation hot on their heels.

Planet 51 is a one gag film. This gag plays on a reversal of the expectations in 1950s sciece-fiction films where here the humans are seen as alien invaders and the green-skinned aliens as normal and everyday. Indeed, the film’s trailer tells the whole of that one gag in the admittedly amusing scene of an astronaut landing on a planet and stumbling out into a suburban barbecue being held by an alien family, where he goes to plant the American flag but stands on a squeaky toy. It is a cute idea that feels like it must surely have appeared before in a cartoon from either Gary Larson or Gahan Wilson.

Indeed, almost the entire structure of the film has been conducted by simply taking E.T. – The Extra-Terrestrial (1982) and swapping the roles of the humans and the alien, where now it is a human astronaut that is stranded on an alien planet, where he is given shelter and hidden in the closet by a local boy who tries to help the astronaut get back home as all the while threatening military and scientists close in determined to capture him. (Indeed, E.T. is one of the numerous science-fiction films quoted here in a shot where Chuck goes stumbling and is momentarily seen flying against a full moon).

Beyond its one gag idea, Planet 51 plays to mostly predictable arcs. Most of the characterisations are by the book – Chuck is cut from the same cockily self-assured space hero block as Buzz Lightyear in the Toy Story films; the hero is an underachiever who pines for the girl-next-door; the military are authoritarian and evil; there is a duo of dim-witted sidekicks.

Planet 51 is another of those science-fiction films where you sort of have to tune out the astronomical improbabilities that require an alien culture to have undergone a parallel evolution that has emerged identical to Earth – down to having movie theatres, comic-book stores, diners that play 50s Earth rock’n’roll numbers on a jukebox, their writing in English, even kids who wear their baseball caps backwards and so on. The improbable coincidence of how both Chuck and the aliens come to speak English is briefly noted by the two lead characters – and then just as quickly forgotten without the two ever speculating as to how this might be possible.

On the other hand, Planet 51 emerges a good deal more likeably than one possibly expected it would. It zips by you with a fair degree of energy and general all-round good humour. A large part of the film is stolen by a duo of non-speaking characters that are modelled after dogs – a mechanical rover obsessed with collecting rock samples that is naturally referred to as Rover, even if it bears a suspiciously improbable similarity to the title robot in Wall-E (2008), and a pet where the alien in Alien (1979) has been made into the equivalent of a puppy – it urinates acid to free itself from its chain and is constantly eagerly attaching its inner tongue proboscis to Chuck (the name on its kennel is even Ripley). There is some surprisingly adult humour at times – jokes about the use of corks to protect oneself from anal probing, and a scene where a naked Chuck stands up and the aliens comment: “That’s a funny place for an antenna.”

Like Monsters vs Aliens (2009), which came out several months earlier in the same year, Planet 51 is made with an affection for 1950s science-fiction films. Indeed, the design for the film operates on a unique scheme that blends retro 1950s nostalgia – cars with big headlights and fins, rock’n’roll etc – with flying saucers and even the ring designs of crop circles. If the film has a theme, it is about turning inside out the xenophobic expectations of 1950s science-fiction cinema – of the aliens being here to devour brains, turn people into zombies etc – and defusing them, although this is something that has been done elsewhere many times and the script here does nothing novel with it.

The film is often a fun game of spotting the reference – the opening Humaniacs film is a spoof of The Day the Earth Stood Still (1951); when Chuck steps out of the shuttle, Also Sprach Zarathrusta plays in a nod to 2001: A Space Odyssey (1968); there are the aforementioned references to E.T.; a number of jokes about Alien from the pet dog Ripley to Rover’s being imprisoned in a simulation of the egg chamber; the anti-grav vehicle that Chuck and Lem escape in makes the same sound effects as the pod racers in Star Wars Episode I: The Phantom Menace (1999); while Chuck is filmed by the news crew reciting lines from Star Wars (1977) and Terminator 2: Judgment Day (1991). There is even a scene where Rover conducts a spin around a lamppost underneath a hail of stones in a parody of Fred Astaire in Singin’ in the Rain (1952). None of which seems too surprising given that the script comes from Joe Stillman who did similar sorts of things, spoofing, deconstructing and creating in-jokes with fairytales in his scripts for Shrek (2001) and Shrek 2 (2004). It all emerges a good deal more good-naturedly than it has any right to.

So far, Planet 51 has been the only film produced by Ilion Animation Studios.