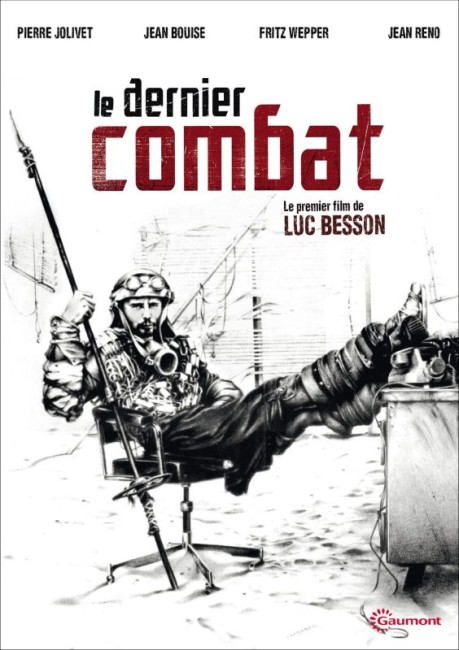 aka The Final Combat; The Last Battle

A man wanders across a destroyed future landscape where a change in the atmosphere has left people no longer able to speak. He is accepted in by a doctor whose stronghold is besieged by a man who is determined to get inside the door. The doctor shows the man his secret – a woman that he keeps prisoner.

Le Dernier Combat was the first film of French director Luc Besson. Luc Besson would go onto make such efforts as the stylish Subway (1986) and The Big Blue (1988), a transcendental film about deep-sea diving. However, it was Nikita/La Femme Nikita (1990) and the stunning Leon/The Professional (1994) that made Luc Besson a cult director in the West, two films that contrasted kinetically enervated action scenes with hauntingly fragile characters. Besson consequently succumbed to big movie-making overkill and his two subsequent efforts – the science-fiction film The Fifth Element (1997) and The Messenger: The Story of Joan of Arc (1999) – were overinflated blockbusters that left one wondering where all the originality in Besson’s previous films had vanished to.

Le Dernier Combat, although it has been retitled The Last Battle and The Final Combat in various release forms, was initially released in English under its French title. It is a variation on Mad Max 2 (1981). Unlike the numerous films that rushed to imitate Mad Max 2, setting up post-holocaust roller-derbies and gladiatorial combat, Le Dernier Combat dilutes the post-holocaust scenario via French New Wave cinema.

Plotwise, Le Dernier Combat and Mad Max 2 are similar – both feature a lone man who is invited into a stronghold where the inhabitant(s) maintain the remnants of technology and civilized society against marauder(s) beyond the gates who, as the film progresses, marshal all efforts to try and break in.

However, instead of revved up action, Luc Besson’s approach is well, so very … French. Plot is elliptical, things never happen directly. And there are moments that are downright bizarre – like the rain of fish that inexplicably occurs in the middle of the film. In fact, if you don’t have the reference point of Mad Max 2 – ie. a grasp of the tropes of the post-holocaust film – it would be very difficult to understand what is going on. The film is shot in black-and-white and has only two lines of dialogue spoken throughout. (In fact, Le Dernier Combat could almost be a sequel to the great French anarchist fantasy Themroc (1973) about civilization reverting to anarchy and preverbal behaviour).

If this is the film that Le Dernier Combat had remained, it would probably have attracted little attention at the time and never been released outside of France. However, this is not the case and Luc Besson gradually develops some stunning moments of the rare visual poetry that science-fiction cinema can do so well. Like the images of the hero reading a book and trying to pronounce the words, or his voiceless scream of frustration at the end.

There is an extraordinarily beautiful moment in the middle of the film where the doctor brings out an oxygen mask and shows Pierre Jolivet how to use it to speak. The expressions as Jolivet struggles to eventually croak out the word “bonjour” are beautiful to watch. There is another such moment later where the doctor takes Pierre Jolivet on a blindfolded journey through the vast building and opens a trapdoor whereupon a woman’s hand unexpectedly reaches out to take the tray of food he holds up. (This is delightfully replayed as a wordless romance where Pierre Jolivet substitutes a present for the tray). It is in these scenes, in the ability to go beyond the mere creation of an alien world and show the wonderment of people suddenly discovering the things we take for granted – speech, a woman – that makes Le Dernier Combat great science-fiction.

Luc Besson’s other films of genre note are the space opera/action film The Fifth Element (1997); his fantastical interpretation of the historical story of Joan of Arc in The Messenger: The Story of Joan of Arc (1999); the eccentric angelic intervention film Angel-A (2005); Arthur and the Invisibles (2006), a part-live, part-animated film based on his own children’s books about adventures in a land of miniaturized people, and its sequels Arthur and the Revenge of Maltazard (2009) and Arthur and the Two Worlds War (2010); the adventure film The Extraordinary Adventures of Adele Blanc-Sec (2010); Lucy (2014) in which Scarlett Johansson gains enormously expanded mental abilities; and the space opera Valerian and the City of a Thousand Planets (2017). Besson also produced and wrote The Dancer (2000) about a mute dancer who gains expression through a unique sound invention; produced the mystical quasi-sf Quebecois film Chaos and Desire (2002): wrote and produced the End Times serial killer thriller Crimson Rivers II: Angels of the Apocalypse (2003); produced the serial killer film Tristan (2003); produced and wrote the futuristic action film Banlieue 13 (2004) and its sequel Banlieue 13: Ultimatum (2009); produced the serial killer thriller Tell No One (2006); produced the Backwoods Brutality film Frontier(s) (2007); produced the videogame adaptation Hitman (2007); produced the horror film The Secret (2007); produced the animated A Monster in Paris (2011); produced the orbiting prison film Lockout (2012); wrote/produced the English-language Banlieue 13 remake Brick Mansions (2014); and wrote/produced The Warriors Gate (2016) in which a videogamer is transported to Ancient China.