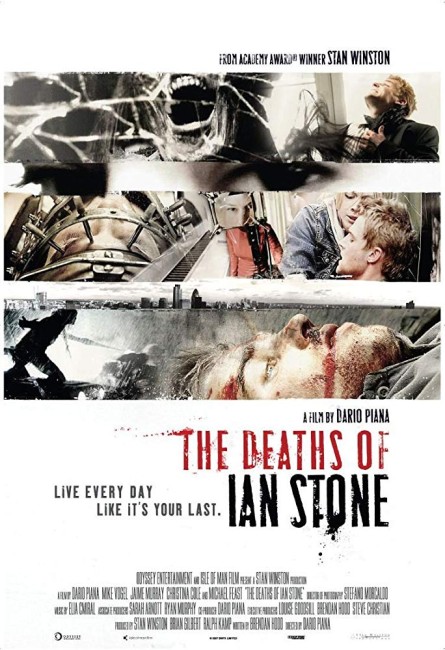 Ice-hockey player Ian Stone is abruptly attacked by mysterious shadow creatures and killed. He comes around to find himself in another life as an office clerk in London. A mystery man tries to warn him that the creatures are coming for him and that he must ‘remember’ before it is too late. Ian flees as the creatures start to come after him but then his girlfriend Medea reveals that she is one of the creatures and kills him. Ian finds himself in successive lives where he is a taxi driver, an unemployed man, a drug addict and then hospitalised. Always the creatures, known as Harvesters, come after him, seeking something that he remembers. In every life, Ian meets the same girl Jenny Walker and she begins to remember her other lives too. The mystery man warns Ian that he must keep Jenny hidden from the Harvesters. As Ian flees with Jenny, he realises his feelings for her. Gradually, Ian learns how he too is one of the Harvesters, who feed on human fear and suffering, but how he came to rebel against who he was.

The Deaths of Ian Stone is a fascinating medium-budget effort from Stan Winston Productions – indeed, it was the last film produced by the celebrated makeup effects artist before his death in 2008. Direction has been handed over to Italian commercials director Dario Piana.

The Death of Ian Stone hits in with a conceptually wild premise that if nothing else immediately plunges it into different territory from the average horror film – a man keeps waking up in different lives, encountering familiar faces in each and being pursued by creatures that kill him, only for him to then wake up in a different life and start the process all over again. Imagine the reality bendings of the great Dark City (1998) reconceived as a horror film, thrown in along with maybe something like Jacob’s Ladder (1990). Take out the creatures and there is a surprising similarity to the much more conceptually sophisticated The Nines (2007), which came out the same year.

For all that it has a novel and unique premise, The Deaths of Ian Stone is not a great film. Dario Piana’s direction is competently average and he at least keeps one involved in wanting to know what is going on. The main frustration is that the film never explains what is going on. Screenwriter Brendan Hood wrote the equally confusing They (2002), which similarly created interesting dream creatures and then failed to explain anything about them.

[PLOT SPOILERS] Here we are given an explanation that Mike Vogel is one of the Harvesters who has rebelled against their society. It becomes apparent why they are hunting him but the script never explains why he keeps waking up in a different life each time after they kill him. Is this some kind of virtual simulation, an alternate reality or what? Who is creating these simulations or alternate lives – the Harvesters? Why is Ian ignorant of who or what he is for the bulk of the film? If he keeps waking up in a new life, how come other non-Harvester people such as Christina Cole’s Jenny keep being replicated as well? Surely if the Harvesters are creating all of these simulations, they would not know the significance of Christina and mystery man Michael Feast to replicate them as well? If they did know, then why is there such an issue about keeping knowledge of Jenny hidden from them? The great frustration of Brendan Hood’s scripts here and in They is that he writes in terms of surprises, twists and wild concepts but fails at creating any backwards logic to support such conceptually out-there ideas. [To Hood’s credit, he claims that much of The Deaths of Ian Stone was altered from his script].

Mike Vogel, later to appear in Cloverfield (2008), as the lead in the tv series Under the Dome (2013-5) and at one point top-listed to play Captain Kirk in Star Trek (2009), seems miscast. Vogel is very much a physical (as opposed to an intellectual) actor. He is the sort of actor you would immediately think to cast as a jock – and as such is perfect for the part of the ice hockey player here – but not someone you think of as an heroic or romantic lead. Were Vogel not a complete unknown, one would think that his casting here had something to do commercial/box-office necessity rather than someone chosen because they are best suited to the role.

Christina Cole, a rising British actress, has a lovely sweetness and innocence in her part and is at least perfectly cast. Jamie Murray, who subsequently gained attention as a regular on the second season of tv’s excellent Dexter (2006-13), seems to be relishing the campy bitchery and positively plays to the gallery.