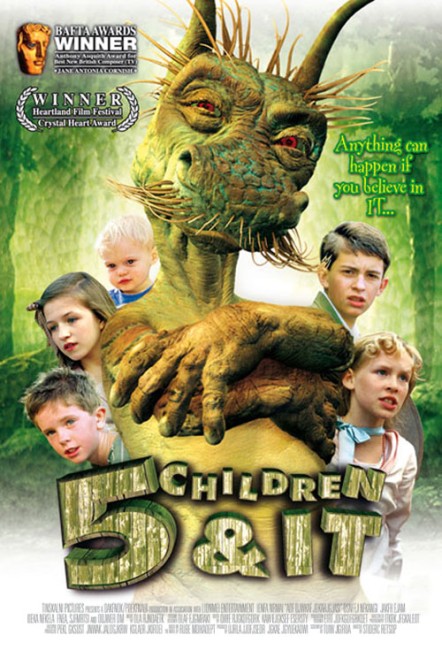 England, 1917. Five children are sent to the countryside to live with their Uncle Albert while their father goes away to join the British Air Force and fight in World War I. The children arrive at the eccentric Uncle Albert’s big, decaying mansion. They soon disregard Albert’s extensive orders about where not to go in the house and venture into the old conservatory. There they find a door that leads through to a beach. On the beach, they dig up a shell, whereupon a strange little creature emerges from inside. It tells them it is a sand fairy and they nickname it It. It grants them one wish each day. They use the first one to do all the cleaning work assigned to them around the house. It creates copies of them to do all the work, which results in chaos – but the wish ends before sundown and everything returns to normal, just before they are discovered. On subsequent days, they wish for buckets of gold coins and angel wings so as to fly away and see their father. However, their obnoxious cousin Horace then captures It and determines to dissect it in his laboratory.

Director John Stephenson had worked as a creature effects supervisor on numerous productions at the Henson Creature Workshop including The Storyteller (1987-8), The Witches (1990), Babe (1995), James and the Giant Peach (1996), 101 Dalmatians (1996) and Lost in Space (1998), before he made his directorial debut with Animal Farm (1999) for Hallmark Entertainment and subsequently went onto the non-genre likes of The Christmas Candle (2014) and Interlude in Prague (2017).

The film makes a number of substantial changes to the E. Nesbit book. Nesbit depicts eleven wishes, while the film allows the children only four. Of these, only two of the wishes we see in the film (the desire to have wings, the desire to have plentiful wealth) are ones that Nesbit included in the book. The film also adds a subplot about the children’s father going away to war that was not present in the original book (indeed, the book was written more than a decade before World War I had even occurred). Furthermore, the characters of Uncle Albert and Cousin Henry do not exist in the book and there is nothing about the children having to go and stay at their house. They do stay at a big house in the country away from London but the parents are present and the Psammead is merely found in a nearby gravel pit.

The film has also now located the story into the loose Victorian/Edwardian setting favoured by a good many British children’s films – see the likes of The Wolves of Willoughby Chase (1989), The Secret Garden (1993), A Little Princess (1995), FairyTale: A True Story (1997), The Chronicles of Narnia: The Lion, The Witch and the Wardrobe (2005) and The Secret of Moonacre (2008). In these, there is a fascination with contrasting the staid traditional surroundings of British upper-class society with children finding a pocket of magic that exists in between.

The book has the message common to many works about the granting of wishes – that asking for what we wish comes with responsibilities and that sometimes getting what we want comes with a host of unforeseen consequences. The film on the other hand seems to regard the wishes as a stepping off point to unleash chaos on screen – a la works like Jumanji (1995) and Shorts (2009). Indeed, the film seems to operate on the joy of unleashing chaos – the clone children cleaning up the house, causing it to gradually descend into turmoil, or where the children go amok in a motorcar – and then producing a wave of the wand that cleanly resets everything back as it was with no consequences.

Like FairyTale, the return of the father at the end is almost seen as a magical reward for having endured the dramatic events that transpire. The film should at least be commended for taking its internal reality seriously – the one point it does puncture this is at the very ending where It’s voice comes, bidding goodbye but saying it will return in Part 2 (clearly a planned sequel that never emerged). This is an unfortunate addition that punctures the suspension of disbelief that the film has otherwise sustained elsewhere.

The special effects are variable. It, The Psammead, cannot help but seem absurd as it walks around carrying its shell with it – looking for all the world like an overburdened sandwich board walker. That said, the scenes with The Psammead reacting with the children are flawless and the most convincing effects in the film. Beyond It, some of the effects are spotty – the digital effects representing the dinosaur that Horace brings to life and the scene where the kids going flying on angel wings in between a flotilla of zeppelins look like ever so slightly like they are just visual effects sequence where the filmmakers are straining to impress us.