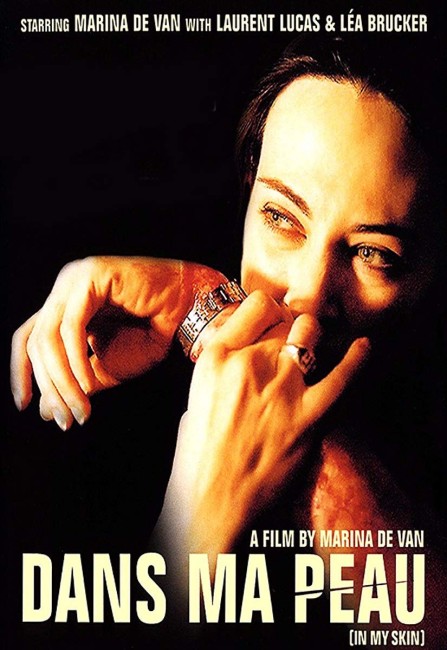 Esther cuts her leg on some metal in the backyard at a party. Afterwards, she becomes fascinated with the wound and keeps cutting herself and reopening it. At the same time, she receives a promotion in her PR job and she and her boyfriend Vincent buy a house and move in together. However, her obsession with self-mutilation soon grows to the point that she starts cutting her own flesh with scissors and knives and then devouring her own skin and blood.

In My Skin comes from Marina de Van, an occasional French actress. De Van has written several of Francois Ozon’s films, including the poem that supposedly inspired Criminal Lovers (1999) and the screenplays for Ozon’s Under the Sand (2001) and 8 Women (2002). In My Skin was Marina de Van’s directorial debut.

In My Skin is a startling film about pathology and obsession. Comparisons were made between In My Skin and the work of David Cronenberg. In My Skin evokes the same fetishistic sense of regarding the body as an alien object that Cronenberg does. One thinks of Cronenberg’s The Fly (1986) with its protagonist fascinatingly watching the process of his body turning into an insectoid lifeform, and especially Crash (1996) with its fetishistic fascination with forms of bodily mutilation, namely auto accidents. Staying in Canada, one might make even further comparison between In My Skin and Lynne Stopkewich’s Kissed (1996), which similarly was a woman-directed film wherein Molly Parker develops an unhealthy sexual obsession (with corpses) and becomes embroiled in her fetish to the abandonment of standard relationships.

The film is shot and lit in cool, neutral tones, the sort of tones that a sleek upmarket furniture commercial might come in. Amid these muted banalities come Marina de Van’s increasing obsessions with self-mutilation. There is the remarkable scene that takes place in a fashionable restaurant where Marina de Van’s co-workers go on about different PR practices in Japan, while de Van sits unnoticed having a mini-crisis – she has to first stop her left hand from playing in her food, it then becomes detached from her wrist and she sits there silently panicking before managing to screw it back on, and then sits pricking and twisting her skin with a fork, as the banal conversation continue on around her all the while. It is a scene that is in every way as remarkable as the one with the chicken coming to life at the dinnertable in Eraserhead (1977).

The bizarreness continues to build in subsequent scenes with Marina de Van in a hotel room, cutting and mutilating her skin with a knife and then eating it, before lying back, raising her leg and letting blood from the wound flow down into her mouth; and the unnerving scene towards the end where she starts twisting a knife into her eye.

Films with sexually obsessive subject matter like this also invoke a relationship between the actor/actress and the director who uses them as their text – the works of Alfred Hitchcock, David Lynch, even Russ Meyer, offer good examples. The relationship is frequently akin to a dominant and a submissive, the actress like a submissive that the director is unleashing their urges and fantasies on. Here Marina de Van is the director, writer and lead actress all in one and In My Skin presents the unique image of the director using her own body as the film’s text. It makes In My Skin seem less a filmic exploration of obsession than it does a piece of solo performance art.

You also have to admire the amazing degree of control that Marina de Van exerts over what it is that she refuses to allow us to see of her own obsession. You could make even further comparisons, in quite different ways to the aforementioned, between In My Skin and Roman Polanski’s Repulsion (1965). In both films we are shown a woman who descends into mentally unbalanced behaviour and obsession, yet where any handholds or easy clues as to the reason why are withheld from the audience. This is what makes In My Skin so effectively unnerving – Marina de Van’s insistence that we merely observe the behaviour her character displays, but never become party to it internally.

Quite why de Van is so driven to mutilate herself is something de Van the writer never gives us. There are certainly no clues to be found in de Van’s regal and aristocratically aloof features – she rarely even smiles. Indeed, the final image of the film with she in black, lying on the bed in the hotel room, bloodied and bruised and looking at the camera as it pulls back from her, is she, both as director and actress, defying us to make any sense or pass judgment on her. The nearest we get to an explanation is one of contrasts. As director, Marina de Van spends much time on the detail of her character’s life – the plans to move in with her boyfriend, her job and promotion – that the effect is clearly one of observing the disparity between a placid, banal and ordered surface and something twisted and obsessive beneath.

Marina de Van has directed three other films subsequently, all genre films, with the psychological horror film Don’t Look Back (2009), the dark fairytale Hop-o’-My-Thumb (2010) and Dark Touch (2013) about a young girl with psychic powers.

(Winner for Best Actress (Marina de Van) at this site’s Best of 2002 Awards).