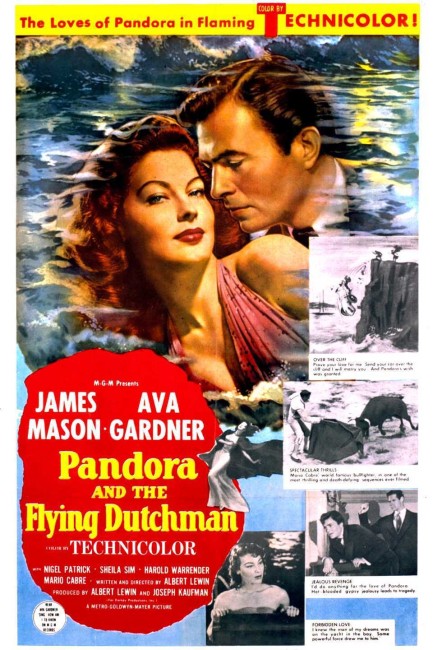 The Spanish seaside town of Esperanza, 1930. Archaeologist Geoffrey Fielding rushes to the beach as fisherman drag two bodies up in their nets. A copy of ‘The Rubaiyat of Omar Khayyam’ found with the bodies causes Geoffrey to remember back to a few years earlier. The American singer Pandora Reynolds had taken up residence in the town. Reggie Demerest, the British heir she arrived with, became heartbroken and committed suicide. British racing driver Stephen Cameron wanted to marry Pandora but she demanded that he push the racing car he had spent two years building over the cliff before accepting. Pandora then saw a yacht newly arrived in the harbour and swam out to meet the Dutch owner Hendrick van der Zee. Hendrick rented a cottage on the shore and a friendship grew between he and Pandora. Geoffrey asked Hendrick’s help in translating some obscure Dutch phrases from a 17th Century manuscript about the Flying Dutchman, the story of a sea captain who murdered the wife he believed was unfaithful to him. In court, the Dutchman stood up to challenge fate itself, only to find himself abandoned on his ship alone and cursed to eternally travel the seas. He was only able to come ashore every seven years to search for a wife, however the woman he finds must be prepared to die for him in order to lift the curse. As Hendrick translated the manuscript, Geoffrey realised that he was The Flying Dutchman. As an attraction grew between Hendrick and Pandora, Geoffrey came to see that she must die in order to lift the Flying Dutchman’s curse.

Pandora and the Flying Dutchman is a classic post-War British film. Seemingly as though determined to banish Wartime gloom and austerity, British cinema of the late 1940s burst out with a boldness that celebrated the joys of Technicolor. Much of this boom centred around the works of Michael Powell and his collaborations with cinematographer Jack Cardiff, which included the likes of A Matter of Life and Death/Stairway to Heaven (1946), Black Narcissus (1947) and The Red Shoes (1948). Cardiff went on to stamp his cinematographic imprint on other works, including The African Queen (1952) and Pandora and the Flying Dutchman here, even directing a handful of titles with the D.H. Lawrence adaptation Sons and Lovers (1960), the first Smellovision film Scent of Mystery (1960) and one genre title with The Mutations (1974).

Pandora and the Flying Dutchman comes from Albert Lewin, an American screenwriter and novelist who directed half-a-dozen films, the most famous of which was the Hurd Hatfield version of The Picture of Dorian Gray (1945), as well as other works such as The Moon and Sixpence (1942), The Private Affairs of Bel Ami (1947), Saadia (1953) and one other quasi-fantastical film with The Living Idol (1957) about a cursed statue. Pandora and the Flying Dutchman was one of the few films from this post-War boom that was not a financial success and has languished in relative obscurity, although has enjoyed considerable acclaim through revival screenings over the years.

First and foremost, Pandora and the Flying Dutchman has been construed as a Technicolor romance. Jack Cardiff knew Technicolor like no other cinematographer of the era. He creates dazzling shots that look down on the entire beach through a bell tower framed in the foreground. The film often seems constructed as a visual love affair with Ava Gardner – the sheer sexiness of her stripping off to swim out to James Mason’s yacht and standing talking to him wrapped only in a blanket. Gardner goes through a fabulous range of costume changes and Cardiff’s lens mists over in lovestruck adoration every time he gets her in closeup. There is an amazingly colourful sequence where we see bullfighter Mario Cabré taking on a bull in the ring. There is also the decadent gorgeousness of scenes like the party on the beach with a trombonist lying playing atop a fallen Grecian statue half buried in the sand, of plinths used to set champagne bottles on and people dancing in the sand between columns.

Visually, Pandora and the Flying Dutchman is exceptional, although when it comes to the way the romance is pitched, things feel somewhat awkward. It is there but I am not fully sure if James Mason and Ava Gardner ever truly connect as a couple you can believe are fated to be together whenever they are on screen. Apart from the initial scene where Ava Gardner swims out to the yacht, the attraction between her and James Mason largely happens off screen – for example, we go from the scene aboard the yacht to the next scene where Harold Warrender’s narrator is telling us how they are in love but never see what happens in the interim.

Perhaps what strikes more than the romance is the self-absorbed cruelty of the Ava Gardner character, how she sits back with a lack of concern after Marius Goring commits suicide by drinking poison or demands that Nigel Patrick push the racing car that he has spent two years building off the cliff before agreeing to marry him. After seeing this character in the first half of the film, it becomes hard to suddenly adjust to her as a standard passive romantic lead of the era in the second half.

There seems far more invested in the period flashback telling of the origin story of the Flying Dutchman where Albert Lewin’s marvellous period dialogue rises to the fore and positively sings. (Although the one thing that left me confused was how James Mason’s vessel manages to switch from a full-rigged sailing ship during the flashbacks to a much smaller luxury yacht in the modern-day scenes).

Ava Gardner was just coming into her star ascendancy at the time that Pandora and the Flying Dutchman was made and inhabits the screen with a classic glamour. No other actor of this period managed to do handsome leading man looks undercut with brooding emotion, albeit tempered with a perfectly British politeness, as James Mason did. It was around this time – quite possibly as a result of his role here – that James Mason was discovered by Hollywood and imported for classic roles in films such as 20,000 Leagues Under the Sea (1954), North By Northwest (1958) and others.

(Screening Courtesy of the Pacific Cinematheque).