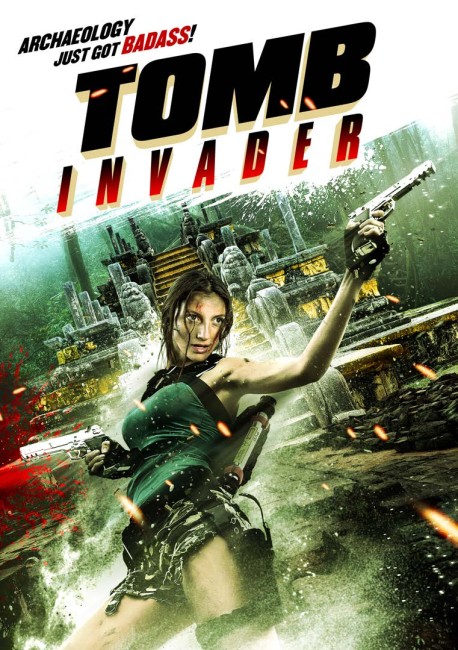 Archaeology professor Alabama ‘Ally’ Channing is contacted by billionaire Tim Parker. He gives Ally the diary left by her mother Julie who went missing on a dig several years ago. He tells Ally he wants her to join him on a quest for the legendary The Heart of the Dragon that her mother was obsessed with finding. She agrees and Tim flies Ally and her assistants to the remote Lintong area of China where they set about locating the temple that houses the stone. Doing so means having to negotiate the death traps inside the temple and treachery within the party.

Tomb Invader was The Asylum’s response to Tomb Raider (2018), the theatrically-released reboot of the film series based on the Lara Croft, Tomb Raider videogame. Following The Asylum’s usual distribution patterns, it went out a week before the US theatrical release of Tomb Raider. Characteristic of The Asylum’s films, Tomb Invader is cheaply made (the exotic international locales were all shot in California). The plot has borrowed from the Indiana Jones films (as the Lara Croft films and games also were) – in particular, the central plotline here about the adventurer going on a quest to find her parent, also an adventurer, has been lifted from Indiana Jones and the Last Crusade (1989).

The action never gets particularly exciting – a venture inside a cut-price tomb, fights with various natives. Like Tomb Raider, there is surprisingly little in the way of actual fantasy elements – a glowing stone that causes some warrior guarding the tomb to come to life near the end (which was actually more in the way of fantastic elements than Tomb Raider had). As with most of The Asylum’s films, it has been cast with D-list actors and actresses. Among these, Gina Vitori is not much of a presence but gives it her all when it comes to the fight scenes.

Director James H. Thomas had previously made the horror film Run Like Hell (2014) and went on to also make Megalodon (2018) for The Asylum.