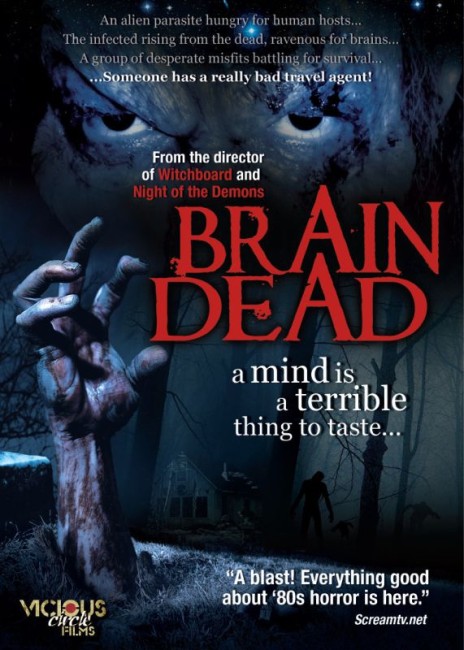 A meteorite comes down in a small backwater creek and strikes a fisherman in the head. This leaves him infected with a parasite that transforms him into a zombie that needs to devour brains. Meanwhile, Clarence Singer has been arrested and is being transported to the next county when the sheriff’s van gets a flat. Bob, the psychotic convict that Singer is cuffed to, makes an escape, dragging Singer with him and they take refuge at a cabin in the woods. There they are joined by several others, including Claudia and Sherry, two med students lost while hiking, and Reverend Aldon Farnsworth and Amy, the lovely assistant he is hoping to have his way with, after his car breaks down. As Bob takes them all hostage at gunpoint, the zombies outside gather and attack.

Brain Dead is Kevin S. Tenney returning to affectionately spoof the sort of film that he made during the 1980s – in particular, the likes of Night of the Demons. The difference being that Night of the Demons and Tenney’s other films of that era were made (relatively) straight, while Brain Dead comes in ironic quote marks – the dvd advertising comes with promisingly tongue-in-cheek line “a mind is a terrible thing to taste”. Almost immediately in, Tenney goes for the exploitation beeline – serving up copious gore and splatter, getting all of the females present topless within at least the first fifteen minutes and layering everything over with a series of sarcastic one-liners.

By its very choice of title, Brain Dead cannot help but beg comparison to the Peter Jackson splatter classic Braindead (1992), aka Deadalive in the US. (There was also the earlier Brain Dead (1990), a mind-boggling reality bender of some interest). Raising the comparison to the Peter Jackson film comes with some disadvantage in that Braindead 1992 was an absolute pinnacle of the 1980s/90s popcorn splatter genre in terms of what it did and leaves Tenney’s Brain Dead lacking by comparison. You could also make comparison between Brain Dead 2007 and the seminal 1980s splatter classic The Evil Dead (1981), with Brain Dead having a very similar set-up involving a group of people at a cabin in the woods at siege from the possessed dead and involving much in the way of hacking and blowing them apart in order to despatch the resident menace.

The downside is that Kevin S. Tenney still seems to be making the same sort of B-budget film he was in the 1980s and not a lot has changed. The photography looks cheap and the actors in some of the roles (all unknowns then and since) are amateurish. Unfortunately for the splatter comedy that Brain Dead wants to be, Gabe Bartalos’s effects look frequently cheesy and unconvincing. Moreover, they are lacking in any of the wild imagination that fired up Braindead or The Evil Dead. If you have watched a few films in this genre, the effects here seem disappointingly routine and not anything that one has not seen before – heads torn off, split in two, holes blown right through heads and so on.

Unfortunately for Tenney, the attempt to create a spoof version of his 1980s splatter films comes across as too forced. The two girls (Sarah Grant Brendecke and Michelle Tomlinson) are outfitted with a series of sarcastic one-liners, although “about as high as Whitney Houston”, “Yeah and maybe Paris Hilton is camera shy” are as funny as these ever get. Hero Joshua Benton is given a line in sarcastic backchat to his cuffed convict companion David Crane that comes out less funny that it makes for a character that quickly becomes incredibly irritating. Brain Dead picks up once it reaches the siege in the cabin in the last thirty or so minutes but the build-up feels strained and signals a film that is struggling hard to make you laugh.