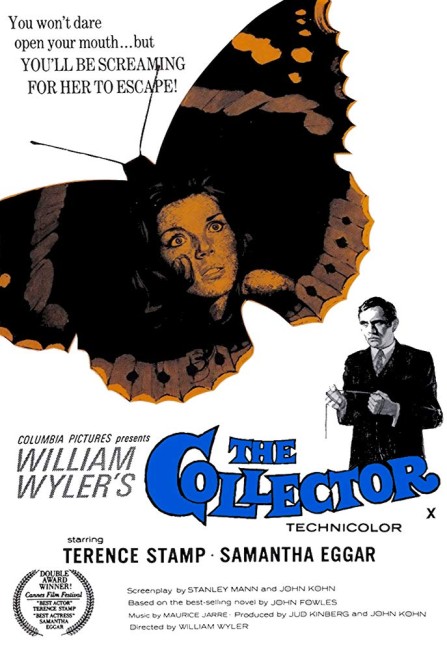 The shy and extremely introverted Frederick Clegg wins £70,000 pounds in the football pools. With this, he buys a remote Georgian house in the countryside. He then stalks and abducts art student Miranda Grey and makes her a prisoner in the cellar of the house. He tells Mirands that he loves her, that he had always admired her from afar when they used to ride on the same bus, and that he is going to keep her there until she begins to reciprocate his feelings.

This is the film adaptation of The Collector (1963), the first novel by John Fowles, a celebrated mainstream writer also known for the likes of The Magus (1966) and The French Lieutenant’s Woman (1969). The Collector is a classic study in obsession where Fowles took inspiration from the Caliban-Miranda relationship in Shakespeare’s The Tempest (1611) – the character is even still called Miranda.

As a film, The Collector is a mixed success. Under the direction of William Wyler, known for classic films like The Best Years Of Our Lives (1946), Roman Holiday (1953), Ben Hur (1959) and Funny Girl (1968), it emerges more as an Odd Couple comedy about two misfits than it does as a study in obsession or a psychological thriller. It has clearly been made at a point when there was the strong influence of Psycho (1960). Terence Stamp is cast very much in the same mother’s boy mold as Anthony Perkins. However, Stamp come across as more cute than he is ever dangerous. (He also has too cultured an accent to make a convincing working class boy either). The tone of the film is more chirpy than it is ever darkly obsessive, more about the quirks of two people coming to like and trying to outsmart each other than it is about Frederick’s obsessive pathology.

The Collector is at its best when it suggests what it could have been, like the suspense scene – one invented over the book – where Terence Stamp has Samantha Eggar tied up in the bathroom while the boring old duffer of a neighbour visits during which she manages to turn the tap with her foot and cause the bath to overflow. There are moments when the relationship works the way John Fowles meant it to, particularly the scene where Frederick fails to understand The Catcher in the Rye (1951) or Dali and gets angry with her. And, of course, the ending is a classic.

Balanced against this are pieces that are astonishing in their hamfistedness – like the plot devices when Samantha Eggar manages to distract Terence Stamp as she is sealing the envelope to her mother – that she could believe he would fall for that, or that she could believe he would buy marrying her without any witnesses (presumably also including a minister or JP) is extremely hard to believe.

The Collector is a film that is much in need of a worthwhile remake. Although one sneakingly suspects that in today’s post-David Lynch, post-Basic Instinct (1992) era of permissive cinema, when the theme has already been covered much more explicitly in films such as Tie Me Up! Tie Me Down! (1990), Boxing Helena (1993) and Pet (2016), the story would prove far too tame. The Collector (2009), though sharing the same title, is an unrelated sadism and torture film.

Other John Fowles works to have been filmed are The Magus (1968) about a series of reality-bending games, the superb Victorian drama The French Lieutenant’s Woman (1981) and the tv movie adaptation of The Ebony Tower (1984).