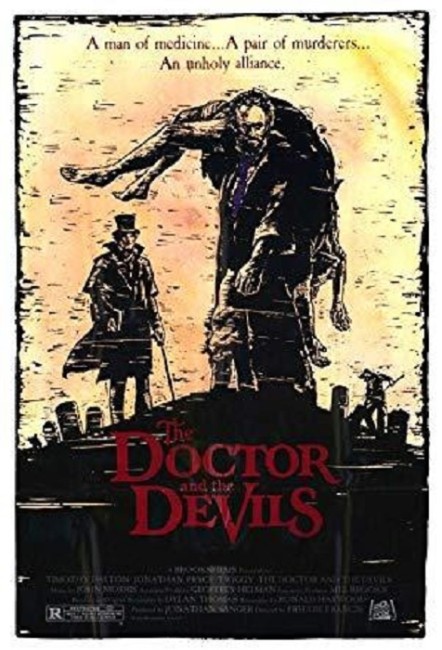 At the School of Anatomy in 18th Century Edinburgh, Dr Thomas Rock is engaged in a passionate idealistic fight to advance medical science and refuses to accept traditional establishment views of research. The only bodies he is legally allowed to conduct anatomical experiments on are those of hanged murderers – but there are only a handful of these each year and he is otherwise forced to rely on body snatchers. Lowlifes Robert Fallon and Timothy Broom discover there is lucrative money to be made stealing bodies and selling them to Rock. In the desire to make more money, this enterprise quickly turns to murder.

The story of real-life body snatchers Burke and Hare who operated in Edinburgh in the 1820s has fuelled several films before – most famously Val Lewton’s The Body Snatcher (1945), as well as The Greed of Burke and Hare (1948), The Flesh and the Fiends/Maniac (1960), Burke & Hare (1972) and subsequently John Landis’s comedic version Burke & Hare (2010). Celebrated poet Dylan Thomas wrote his own screenplay adaptation of the story The Doctor and the Devils in 1953 but this remained unfilmed following Thomas’s death shortly after that point. There were several attempts to mount a production but none of these succeeded until Mel Brooks and Freddie Francis came along 42 years later.

Freddie Francis was one of the finest directors to emerge out of the Anglo-horror school of the 1960s. (See below for Freddie Francis’s other films). By the 1980s, Francis was one of the few directors from the Anglo-horror school still in the business. The Doctor and the Devils marked Francis’s return to the director’s chair after a decade’s absence – his last film had been The Ghoul (1975).

The Doctor and the Devils could almost have been a film of the old Hammer school – a Hammer film with a better budget. Certainly, a better budget is something that allows the presentation of Edinburgh as a grim and grimily realistic Victorian ghetto. The Doctor and the Devils was about the only horror film during the 1980s to be set in the 19th century that used to be Hammer’s regular stomping ground – which probably says something about how much the horror film has changed since the demise of the Anglo-horror cycle.

And as such, The Doctor and the Devils was very much an anachronism in its year and not many people went to see it. There is a faint old-fashionedness to its plot – it is ever so contrived at times and swings some ungainly plot devices – the diamond ring, the well-educated Dr Murray’s dalliance with a street prostitute – devices that seem extremely familiar to the sedately controlled type of plot that Hammer films specialised in but much more hokey amid the greater realism of this film.

Where The Doctor and the Devils succeeds is in its literate articulation of the characters of Dr Rock/Dr Knox and Fallon and Broom/Burke and Hare. Freddie Francis makes strikingly potent contrast between Rock’s idealistic fervour and Fallon and Broom’s naked greed. (The film’s sympathies initially do lie in a understanding of Rock’s idealism, although by the end, the film condemns him, resorting to the old Anglo-horror potato of the anti-science polemic).

Essential to the conviction the characters have is the film’s impressive cast line-up. Particularly good is Timothy Dalton’s handsome and charismatic performance as Rock – he fires the film’s idealistic fervour up. Dalton is balanced out at the other end by Stephen Rea and in particular Jonathan Pryce – Pryce gives us Fallon as a filthy psychopath driven purely by greed with no redeeming human values whatsoever. The cast’s Scottish accents have a tendency to waver or get forgotten from time to time, although the worst performance comes from Twiggy whose attempt to swing a Cockney accent is thoroughly unconvincing.