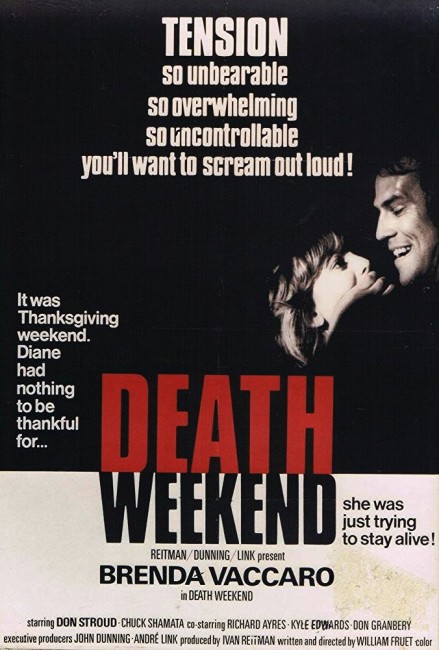 aka House By the Lake

The model Diane accompanies a dentist friend Harry to his country house to join several others for a weekend-long party. On the way there, Harry allows Diane to take the wheel of his Ferrari and she engages a gang of petty hoods in a chase, which ends with the hoods crashing off the road. The gang leader Lep swears vengeance. Up at the house, Diane discovers that there are no other guests and all that Harry wants from her is sex. However, the gang then come, invading and smashing up the house.

This surprisingly good Canadian feature follows on the footsteps of the mid-1970s genre of Backwoods Brutality films such as Straw Dogs (1971), Deliverance (1972), The Last House on the Left (1972) and The Texas Chain Saw Massacre (1974) to name but the most famous.

Death Weekend hits in from the first scene where an innocent turn at the wheel on Brenda Vaccaro’s part turns into a high tension chase sequence against Don Stroud and his thugs. We are made further uncomfortable by a brutal sequence early on where just for kicks the thugs grab the arm of a cop as he reaches through the window of their car and accelerate off.

As with many of the abovementioned films in the Backwoods Brutality cycle, Death Weekend is about the tearing apart of middle-class values. Part of the horror of the film comes in the sequence where the hoods invade and smash up of Chuck Shamata’s opulent bachelor pad. The film clearly construes these scenes as an attack on middle-class materialism – as Don Stroud lectures Chuck Shamata: “You don’t care what I do to this charming lady, you don’t even care what I do to you. But this crap house, this car, this means something to you.” Films like this act as shock therapy for the middle-classes, exemplifying the same anarchic rage against middle-class materialism that the youth counter-culture movement of the time was expressing.

The scenes with the hoods gleefully smashing up the house, all the while taunting the powerless Chuck Shamata; the rape of Brenda Vaccaro by Don Stroud where he alternates between what almost appears to be a tenderness and coarse brutality; the scene where Don Stroud effortlessly takes the gun away from Chuck Shamata and starts hunting him all contain a shock brutality.

Less effective are the scenes where Brenda Vaccaro strikes back. One scene where she has sex with Richard Ayres and slashes his throat with a shard of broken mirror is surprisingly graphic, although the torching of the boathouse and the death in the swamp are routine. The reason for this is because William Fruet places the emotional charge of the film on the smashing up of Chuck Shamata’s world, scenes where Brenda Vaccaro remains mostly passive throughout, and as a result there is not the brutal sense of violation of her as there is in say Day of the Woman/I Spit on Your Grave (1978). When the turning of the tables comes, her standing up and fighting back does not have as much of a cathartic emotional charge on the audience’s part as it should. It certainly would if it were Chuck Shamata’s character standing up.

Death Weekend was also one of the earlier films produced by Ivan Reitman, later to become a comedy director in the American mainstream with films such as Meatballs (1979), Stripes (1981), Ghostbusters (1984), Twins (1988) and others.