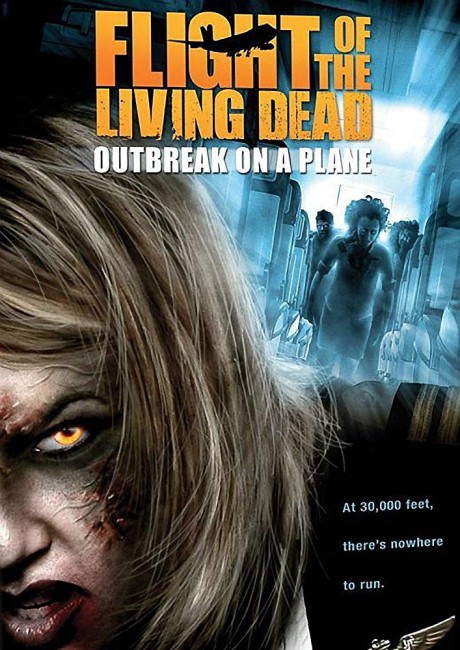 Dr Leo Bennett from Medson Laboratories has commandeered a commercial flight from the US to Paris to transport a container. At The Pentagon, it becomes apparent that Bennett was conducting illicit research and has fled the country. Turbulence from a storm causes the container to overturn and release its content – the imprisoned Medson scientist Dr Kelly Thorp who has been infected with a mutated malaria virus. This has turned her into a zombie and she rapidly moves through the cargo hold to infect others. As the plane is overrun by zombies, the passengers try to find what refuge they can while fighting back. At the same time, the Air Force makes plans to shoot the plane down.

Flight of the Living Dead: Outbreak on a Plane came out amid the zombie revival of the late 2000s following the success of films like Resident Evil (2002), 28 Days Later (2002), Dawn of the Dead (2004) and Shaun of the Dead (2004). The majority of the films that followed were cheaply produced and quickly dried up all creativity in the particular genre niche that was the zombie film. As a result, most films coming after this point turned to self-parody and/or throwing zombies together with wholly incongruous things as some kind of novelty. See Zombie Films.

The other clear influence on Flight of the Living Dead is Snakes on a Plane (2006), which came out six months earlier. Snakes on a Plane was conceived in terms of scriptwriters throwing a standard disaster movie together with the most absurd thing they could think of. The film’s tongue-in-cheek approach caught on and several other filmmakers tried to offer similar wacky collusions – The Asylum’s Snakes on a Train (2006), Swarm (2007) with ants on a plane, Silent Venom (2009) with snakes on a submarine, Howl (2015) with a werewolf on a train and Lost in the Pacific (2016) with mutant cats on a plane. The zombies on a plane concept was also done in Quarantine 2: Terminal (2011), while the hit South Korean Train to Busan (2016) successfully transferred the zombie film aboard a train.

The surprise about Flight of the Living Dead is that it doesn’t go the tongue-in-cheek route of Snakes on a Plane, even though it is a far more absurd film (potentially). I know there are various other reviewers out there that call it a parody, a zombie comedy and so forth. However, beyond the title, which spoofs the classic zombie film Night of the Living Dead (1968), everything is played straight. There is the usual cross-section of improbable characters that you get in a disaster movie – the passenger complement including a celebrity golfer clearly modelled on Tiger Woods, two jocks and their girlfriends (where one of the jocks is having an affair with his friend’s girl), a nun, an Interpol agent and his prisoner who is a wanted conman, Richard Tyson as an air marshal and an aging pilot captain on his last flight before his retirement. You keep waiting for the film to either start subverting or wickedly parodying such characters akin to something like The Big Bus (1976) or Airplane/Flying High (1980) but this never happens.

When the zombie outbreak occurs, Scott Thomas keeps the action fierce and moderately bloody. There are some rather entertaining effects – a zombified Erick Avari thrown out of the plane and being splattered in the jet engine; the nun having her legs chewed off and being left to crawl about on her stumps; a zombified businessman blasted out a hole in the side of the plane while still aboard his seat and slammed into the front of a trailing fighter jet. While neither redefining nor setting any genre tropes alight, Scott Thomas delivers a vigorous and entertaining run through of the zombie film basics.

This was the sixth film for director Scott Thomas who had previously made action films and human dramas. Thomas’s most high-profile work was as a producer on the animated tv series X-Men (1992-6).