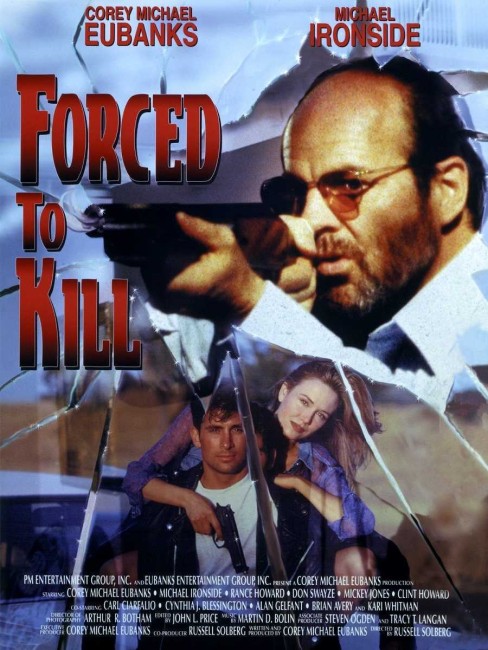 The repo man Johnny recovers a Jaguar from a buyer who has failed to make payments. He is offered an additional fee if he will drive the Jaguar across country to its original owner. Along the way, Johnny beats up three thugs who are harassing a homeless man. Afterwards, he is followed and then a vehicle pulls out across a country road, causing him to crash. He is taken prisoner and chained up by Rance and his two hick sons. Rance explains that he wants Johnny to compete in an illegal bare-knuckle fight. To ensure his co-operation, Johnny’s fiancée Heather is abducted. As Johnny tries to escape, he finds that the fight is being bankrolled by the corrupt local sheriff and the entire police force are against him.

Forced to Kill is an action/martial arts vehicle for stuntman Corey Michael Eubanks. Corey Michael Eubanks was a former boxer who became a stuntman beginning on tv’s The Dukes of Hazzard (1979-85) and has appeared in a host of films and tv since. Eubanks made his acting debut in various minor parts and his lead debut in Payback (1990), although has not really done much acting subsequent to Forced to Kill. Eubanks has also directed several tv episodes and two films with Bigfoot: The Unforgettable Encounter (1994) and Two Bits & Pepper (1995), which surprisingly enough are for family audiences. Eubanks has also written the scripts for Forced to Kill, Payback and his two directorial outings. Forced to Kill is directed by Russell Solberg, another stuntman who also turned director and actor.

For an action star, Corey Michael Eubanks has a naturally funny presence. The film opens on a highly amusing scene with him repoing a Jaguar and getting into a fight with its owner where he is constantly offering wry quips in between exchanging blows. When you contrast Forced to Kill against other vanity productions written by action stars – see Sylvester Stallone’s Cobra (1986) and the Rambo films or Chuck Norris’s Invasion U.S.A. (1985) – Eubanks’s effort here emerges rather well. What we have is not an egotistical vanity production but one where the star has subsumed their ego and concentrated on a decent story. For an action hero, Eubanks also has a surprisingly liberal attitude when it comes to issues like treatment of the homeless and panhandlers.

The action scenes are all competently directed, while being located within a solid plot. The exception is towards the end where the film goes through a series of generic action set-pieces – horse chases, foot chases, explosions, vehicle chases and copters pursuing speedboats – that have a mechanical feel and are not as interesting as the earlier scenes that have Eubanks a prisoner of the backwoods hicks. Not to mention that the climax seems to involve Eubanks killing half-a-dozen innocent law enforcement officials without somehow being regarded as a wanted criminal by all law agencies, something that we are to regard as justified solely because he is on the run from a corrupt sheriff.

There is quite a brutality to the film in the earlier scenes – Don Swayze blowing the Jag up with a shotgun and then shooting the burning Clint Howard in cold blood; Eubanks being dragged being a pickup truck in chains and then tied to a tree and being shot at; or being forced to run in front of a truck while being jolted with an electric cattle prod; the scene where he escapes on foot and Michael Ironside’s police vehicle comes up over the hill behind him and Ironside downs him by opening the door as he drives past.

Rance Howard, Don Swayze and Mickey Jones all give good loathsome performances as the backwoods family. One of the more interesting minor parts is the character of Carrie (Cynthia J. Blessington) where it is never clear whether she is a sister, or the wife or girlfriend of one of the men. In one scene we get Mickey Jones entering while she is bathing and eyeing her up; in another Rance Howard beats her with a rod for betraying the family.