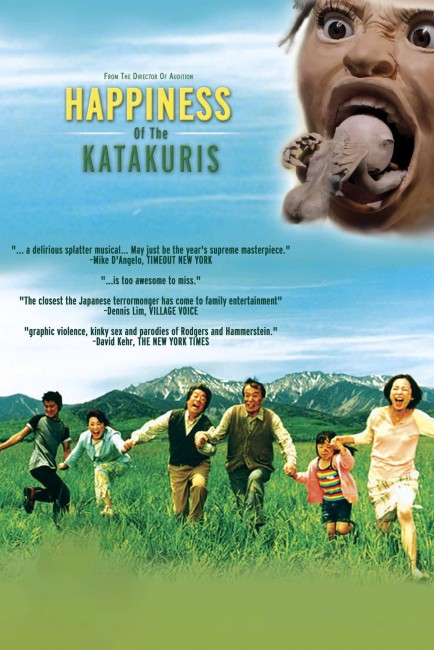 The Katakuri family, including husband Masao, wife Terue, son Masayuki, daughter Shizue and her young daughter Yurie, and the grandfather Nihei, have left the city after the father lost his job as a shoe salesman. They have bought the White Lover’s Guesthouse on a remote mountainside. In doing so, they believed that a new road development nearby would soon bring custom their way but so far they have not had a single guest. Their first customer now turns up. However, in the morning the man is found dead, having plunged a knife into his own neck. They agree to bury the body by the lake, as news of their first customer’s death would be bad for business. Next, a sumo wrestler and his girlfriend sign in and also die during sex and must be buried. Other guests continue to arrive but each befalls a fatal accident.

Japanese director Takashi Miike became a cult figure in the 00s. Takashi Miike is an amazingly prolific director and has put his fingers into almost every genre imaginable, ranging from science-fiction, horror and fantasy to children’s films, genteel dramas and a great many Yakuza films. It is however Miike’s way-out films – the likes of Audition (1999), Ichi the Killer (2001) and Visitor Q (2001) – that have developed a cult following due to their scenes of extreme torture and perversity.

The poster/video cover of The Happiness of the Katakuris notes “The hills are alive with the sound of screaming,” of course parodying the famous line from The Sound of Music (1965). This tends to give a wrong impression about what type of film The Happiness of the Katakuris is. It is not a horror film, even though the advertising tries to categorise it along with Miike’s other horrors.

Indeed, The Happiness of the Katakuris is almost a film that defies any attempts to categorise it. The only precedent might by the wackiness of the musical version of Little Shop of Horrors (1986). Maybe the nearest one might come would be to envision The Happiness of the Katakuris as Little Shop crossbred with the blackly deadpan surrealism of the Coen Brothers and with Czech Claymation animator Jan Svankmajer brought in somewhere along the line too. However, Takashi Miike lets loose with an anything-goes lunacy way above and beyond either of these.

The Happiness of the Katakuris is a completely madcap film. A rain-soaked stranger arrives, the first guest at the lodge, and the whole family burst into song; the man goes to his room and floats up off his bed and flies away to the stars, only to fall back down to his bed when the son knocks on his door with the beer he ordered. In the morning, the family discover the man’s body with a knife buried in his neck whereupon they burst into song. Daughter Naomi Nishida’s encounter with a sailor at a cafe becomes an opportunity for a love song, replete with choruses in the background, rains of confetti and they flying off to drift through starscape and flower patterns. The musical sequences even come with karaoke-type subtitles with a bouncing ball illuminating the words being sung so that the audiences can sing along.

There is another song-and-dance number with the dead coming out of the graves to sing along as a chorus and a bizarre song about dying from a knife wound, before the wound is revealed to only be a graze. The film climaxes with a volcanic eruption that is again depicted by Claymation, before the family reunite (in live-action) to sing a song and the grandfather is bodily taken up to Heaven.

The film also has a truly bizarre Claymation animated beginning. A girl sits in a restaurant, only to fish a tiny angel out of her soup. The angel promptly tears her uvula out and flies away, leaving her to collapse, only for the angel to then be devoured by a crow. The crow is then killed by a cloth monster with a ziplock head, teeth and claws, only to be reborn from an egg and be devoured all over again. It is a sequence that seems like something out of a Jan Svankmajer film like Alice (1988).

Takashi Miike’s other genre films are:– Full Metal Yakuza (1997), a yakuza/cyborg film; the teen film Andromedia (1998) about a schoolgirl resurrected as a computer program; The Bird People in China (1998) about the discovery of a lost culture; the torture and sadism film Audition (1999); the Yakuza film Dead or Alive (1999), which comes with a gonzo sf ending; the surreal Dead or Alive 2 – Birds (2000); the six-hour tv mini-series MPD Psycho (2000) about a split-personalitied cop tracking body-hopping terrorists; Ichi the Killer (2001), a Yakuza film with some extreme torture scenes; the controversial taboo-defying Visitor Q (2001) about a mysterious visitor; the Cyberpunk future-set Dead or Alive: Final (2002); the surreal Yakuza film Gozu (2003); One Missed Call (2003) about ghostly cellphone calls; the ultra-violent Izo (2004) about a cursed, immortal samurai; an episode of the horror anthology Three … Extremes (2004); the superhero film Zebraman (2004); the fairytale Demon Pond (2005); the supernatural fantasy epic The Great Yokai War (2005); Big Bang Love, Juvenile A (2006), a prison murder mystery with SF elements; the SF film God’s Puzzle (2008); YatterMan (2009), a gonzo live-action remake of a superpowered anime tv series; Zebraman 2: Attack on Zebra City (2010); the videogame adaptation Ace Attorney (2012); Lesson of the Evil (2012) about a murderous high school teacher; As the Gods Will (2014) with high school students being slaughtered by a doll; Over Your Dead Body (2014) wherein the roles in a ghost story play come to replay themselves in the lives of the actors; the gonzo horror film Yakuza Apocalypse (2015); Terra Formars (2016) about giant mutated cockroaches on Mars; Blade of the Immortal (2017) about an immortal samurai; JoJo’s Bizarre Adventure: Diamond is Unbreakable – Chapter 1 (2017); Laplace’s Witch (2018); and The Great Yokai War: Guardians (2021).