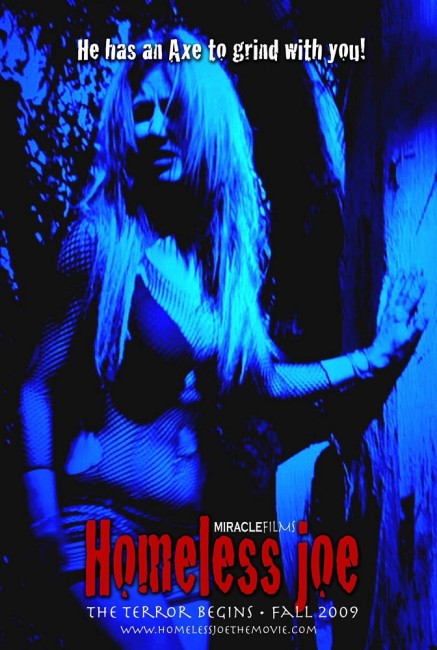 aka Bum With a Gun

Sean Goodman suffers from perpetual anxieties and is constantly having to take pills to calm himself. He joins a group of friends as they head to a party. On their way there, his friend Dale beats up a homeless man who gets in his way. As the party ends, they find the tires on their vehicle have been slashed and so head to another girl’s house a few blocks away to get a ride back. However, on the way there, someone starts attacking and abducting the members of the group. With Sean the only one left, he must follow their mystery attacker into the sewer tunnels. There he finds a laboratory where a series of secret experiments has produced Homeless Joe, a serial killer designed to create urban mayhem. Sean rescues his friends but as they escape back to the surface, Homeless Joe comes hunting and slaughtering them.

Homeless Joe starts out with the intriguing premise of a homeless serial killer. The opening title card tells us that: “There are 1.25 million homeless in the U.S./There are 35 active serial killers/And at least one is both.” This does perhaps create some dubious connections between the economically disadvantaged and serial killers but, incredibly enough, the idea of a homeless serial killer has been conducted at least twice before with Open House (1987) and The Vagrant (1992). All of these are made in the US, where notedly homelessness tends to be regarded as an issue of moral shortcoming rather than with sympathy for someone’s plight.

Certainly, the idea of serial killer and homeless people seems an incongruous mix. Most homeless that one has encountered are physically derelict and/or suffering substance abuse problems, not exactly people that readily have the physical prowess or strength to hunt and physically overpower victims. Moreover, the logistics of living on the street with one’s belongings in a shopping trolley would not exactly make it easy for the usual serial killer business of imprisoning and torturing victims. Nevertheless, the idea of a homeless person taking revenge on those that regard him as nothing or (as seen here) kick him in disgust holds a certain promise. Alas, that opening title card manages to be about the sum of Homeless Joe‘s nod to social relevance and thereafter it makes a beeline for gore and horror movie convention. Disappointingly, nothing is ever made of the homeless person seeking revenge angle.

Homeless Joe is a low-budget independently made film from a group of California-based filmmakers. A basic competence is maintained on the level of production. The early scenes make an effort to develop a natural interplay between the actors. The scenes with the group heading to the party are written with an appealingly sarcastic amusement, where the writers appear to have a great deal of affinity for the horny best friend. The film is occasionally beset by amateur actors – the actor in the prologue screaming “Not my dick” as said item is severed delivers surely the least convincing cries of anguish ever committed to celluloid.

On the other hand, the film suffers from several abrupt changes of pace and tone. The opening party scenes come with a darkly funny amusement and these passably segue into the serial killer’s attack on the group as they walk to the other partygoers’ house. On the other hand, when it ventures into the sewer tunnels, the film turns into something else. The relatively realist aboveground scenes about a homeless killer become a science-fiction/horror hybrid with a sinister underground labyrinth and mad scientists having created monsters. Finally, the latter section back aboveground turn into a survival horror scenario as the party are hunted through the woods and gorily despatched by the little-seen killer. The hunting scenes in particular come with an over-hyped soundtrack that is constantly trying to achieve sinister effect. A good deal of gore is splattered about but most of this tends to look fake. For some reason, these scenes have also been solarized and tinted various colours.

Throughout all of these turns, the script piles on twists that are bizarre to the point of being unbelievable – that the homeless serial killer has been genetically engineered in a series of experiments (by whom is not exactly made clear) for the purpose of creating mayhem. The means whereby this has been done holds little credibility – indeed, offers exactly the same problem as the virtual android serial killer film Virtuosity (1995) did in trying to suggest the absurd idea of creating a serial killer by psychological cut-and-paste methods, which fail at a moment’s thought due to the fact that each killer’s circumstances and methodology is wildly different.