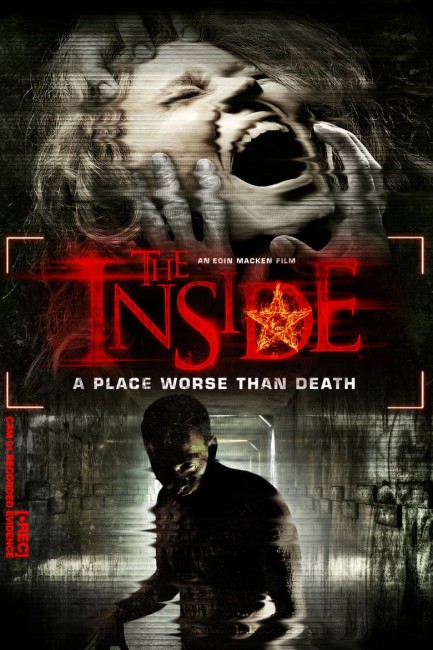 In Dublin, a man obtains a video camera in a pawn shop and views the recording left on it. It shows five girls out on the town for Corina’s birthday. A male friend Barry takes them to an abandoned building to party. While they are there, three men come in, batter Barry to death and then proceed to taunt and rape the girls. The lights then go out and the men disappear. In trying to find a way out of the building, the girls find themselves trapped in a labyrinth of rooms and cellars stalked by something that lurks in the dark.

The Found Footage film gained its feet around 2009. Since then, like a great many other genre fads that come and go – the slasher film, the killer android film, the sword and sorcery film, the space opera and others – it has seen a great many imitators. Some of these have been very good, most mediocre wannabes and some fairly bad. Of these, I would have to say that The Inside may be one of the worst Found Footage films made to date. Due to the similarity of titles, The Inside should not be confused with the harrowing French home invasion film Inside (2007).

Though Eoin C. Macken chooses to take the Found Footage route, he is down around amateur level and not operating with the resources that other directors in the field are. Found Footage films are able to be cheaply produced because people often shoot in their own homes and where the very style adopted allows ragged camerawork to easily be disguised or incorporated. Even given such a low threshold, The Inside feels like all random and annoyingly jumpy camerawork.

You could compare The Inside to the better Australian-made The Tunnel (2011) also about underground-dwelling troglodytes. The Tunnel was filmed in Sydney’s disused railway tunnels whereas here it feels as though all that Macken has been able to obtain is a disused building and a set of cellars with a lot of junk lying about where he fails to transform this into anything that holds any atmosphere. Most Found Footage films use the seeming randomness to disguise well choreographed scenes; for Macken, it is frequently just a handheld camera waved in the general direction of what is happening.

The other things is you are really not sure what type of film you are watching or what is going on as no explanations are ever offered. The first half-hour involves the girls partying in the abandoned building, which is then invaded by three thugs who proceed to terrorise them. There is one brutal scene where the male of the group (Sean Stewart) is battered to death but the rest of this consists of some twenty minutes of jerky handheld camerawork where the soundtrack consists only of the girls screaming and the men shouting and laughing manically. In the midst of this, the lights go off and when they come back on the men have vanished – only one of them is ever seen again and no explanation is offered for what occurred.

The girls spend most of the rest of the film trying to find their way out of the labyrinth of rooms and halls but keep going in circles or being separated. At several points, they end up being pursued and attacked by a half-naked man (or creature) covered in blood. Who or what this person is is never explained, nor why it wants to attack them. Your assumption is that this is some kind of troglodyte along the lines of a Death Line/Raw Meat (1972), Creep (2004) or The Descent (2005) but no answers are forthcoming.

The opening credits are also framed by a series of statements quoting the number of people that disappear every year, even figures cited for the US and other countries. One of the more absurd things is to reach the end of the film and wonder what this has to do with anything that just transpired where it seems wholly ridiculous to suggest – as the opening does by implication – that one decrepit cellar dweller living in an abandoned building in Dublin is responsible for tens of thousands of disappearances around the world.