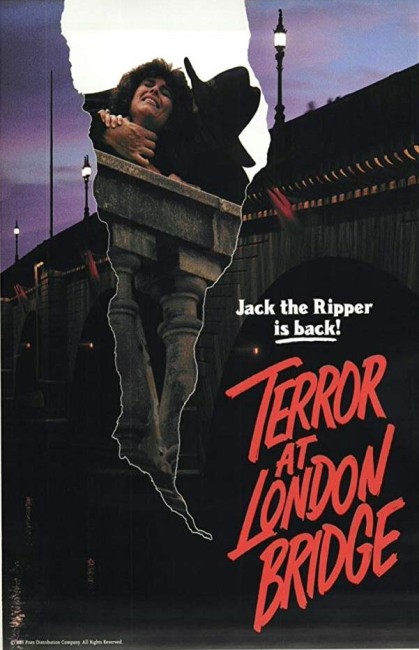 aka Terror at London Bridge

In 1888, Jack the Ripper is pursued across London Bridge by a mob and falls into the river. As the Ripper goes over the side, a stone from the bridge is knocked into the river too. In the present day, London Bridge has been relocated to the shores of Lake Havasu in Arizona. The missing stone has been recovered and put in place and there is about to be a rededication ceremony. A tourist goes out onto the bridge at night whereupon The Ripper appears and kills her. Detective Don Gregory investigates the murder. As other killings occur, Gregory comes to believe that the killer is the resurrected Ripper and is repeating the pattern of the Ripper’s killings.

Bridge Across Time was an interesting oddity from the 1980s era of tv movies. It seems like a strange crosshatch of news headlines that were floating around at the time. One of these was what is commonly called London Bridge (as opposed to London’s more famous Tower Bridge). The bridge had been built in 1831 but during the 1960s it was determined that it was sinking at several inches per year and could not support modern traffic loads. The City of London placed it on the market while a new bridge was being built. It was brought for $2.4 million by property developer Robert McCulloch who had founded a town (Lake Havasu City) on the shores of Lake Havasu that its on the border of California and Arizona. McCulloch had the bridge shipped stone by stone where it was rebuilt on the Arizona side of the lake and opened in 1971. An English themed village was built nearby and the bridge became a popular tourist attraction.

1985 was also three years short of the centenary of the Jack the Ripper killings. As this approached, there was renewed interest in the media about the murders and a couple of film works with the modernised Jack’s Back (1988) and the tv mini-series Jack the Ripper (1988). (See below for the other Jack the Ripper films and tv). Bridge Across Time, known equally under the name Terror at London Bridge, feels like it has been conceptually slung together to marry these two concepts – the coming Ripper centenary and being able to shoot on and around London Bridge at Lake Havasu.

The script comes from William F. Nolan who is principally remembered as the co-author of the book Logan’s Run (1967), which was made into the film Logan’s Run (1976) and subsequent tv series Logan’s Run (1977). Nolan also solo wrote two Logan’s Run book sequels. Elsewhere, Nolan has scripted genre tv movies such as The Norliss Tapes (1973), The Turn of the Screw (1974), Trilogy of Terror (1975) and the theatrical film Burnt Offerings (1976).

I had heard about Bridge Across Time for many years and the concept sounded intriguing. However, after finally sitting down to watch the film, I ended up heavily disappointed. The concept is not dealt with in any imaginative way. The resurrection of The Ripper is a banal affair – the stone from the bridge where he fell over the side is repatriated with the bridge and causes the Ripper to be resurrected at Lake Havasu and start killing in exactly the same pattern he did back in 1888. There are no more hows or whys offered than that. Even more frustrating is the fact that the film does nothing whatsoever to tackle the burning question that has vexed Ripperlogists – that of who The Ripper was. We know nothing more about the Ripper case at the end of the film than we did at the start. Everything takes place with a formulaic tv movie blandness of direction.

The film has an interesting cast. As the lead detective, there is a young handsome David Hasselhoff who must have made this in the downtime between one of the seasons of Knight Rider (1982-6) and several years before Baywatch (1989-2001). There is also appearances from youngish Lane Smith as an officious mayor and Clu Gulager as the police chief, plus Adrienne Barbeau, the star of The Fog (1980) and Escape from New York (1981) who was Mrs John Carpenter at the time, as one of the victims.

E.W. Swackhamer was a director who worked almost entirely in television between the 1960s and his death in 1994, directing many episodes of classic series. His other genre works include the Hollywood ghost story tv movie Death at Love House (1976); Spider-Man (1977), the pilot for the Nicholas Hammond tv series that was released theatrically outside the US; The Death of Ocean View Park (1979) about a haunted amusement park; and the tv movie Vampire (1979).

The other Jack the Ripper films include:- those that conduct supposedly straight tellings of the details of the case such as Jack the Ripper (1959), the Spanish Jack the Ripper of London (1971) with Paul Naschy, Jess Franco’s Jack the Ripper (1976) with Klaus Kinski, Jack the Ripper (tv mini-series, 1988) starring Michael Caine, The Ripper (1997), the Alan Moore graphic novel adaptation From Hell (2001) with Johnny Depp, the German Jack the Ripper (2016) and Ripper Untold (2021). There are a number of other works that feature The Ripper as a central character like Alfred Hitchcock’s The Lodger: A Story of the London Fog (1927), and its remakes The Lodger (1932), The Lodger (1944) and Man in the Attic (1953), as well as Room to Let (1950), although most of these vary widely from the known details. More prevalent have been speculative treatments, including the likes of:- having the contemporary but fictional figure of Sherlock Holmes solve the mystery in A Study in Terror (1965), Murder By Decree (1979) and Holmes & Watson: Madrid Days (2012); the Ripper being an alien spirit that possesses Scotty in Star Trek‘s Wolf in the Fold (1966) and with similar stories occurring in episodes of Kolchak: The Night Stalker (1974-5) and The Outer Limits (1995-2002); the Ripper being Dr Jekyll in both Dr Jekyll and Sister Hyde (1971) and Edge of Sanity (1989); Jack the Ripper’s daughter featuring in Hands of the Ripper (1971); H.G. Wells and the Ripper travelling through time to the present day in Time After Time (1979) and its tv series remake Time After Time (2017), as well as a time-travelling Ripper appearing in episodes of tv series like Fantasy Island (1977-84), Goodnight Sweetheart (1993-9) and Timecop (1997-8); The Ripper having travelled out West in the Knife in the Darkness (1968) episode of the Western tv series Cimarron Strip (1967-8) and the film From Hell to the Wild West (2017); The Ripper being resurrected or copycated in the present day in The Ripper (1985), Jack’s Back (1988), Ripper: Letter from Hell (2001), Bad Karma (2002), The Legend of Bloody Jack (2007), The Lodger (2009) and Whitechapel (tv mini-series, 2009); a parody segment of Amazon Women on the Moon (1987) that speculates that the Ripper was in fact the Loch Ness Monster; the Babylon 5 episode Comes the Inquisitor (1995) that reveals the Ripper was taken up by aliens and redeemed; transposed to Gotham City in the animated Batman: Gotham By Gaslight (2018); even turning up as a character in the French animated film Jack and the Cuckoo-Clock Heart (2013). Also of interest is the tv series Ripper Street (2012-6), a detective series set in London in the immediate aftermath of the Ripper killings.