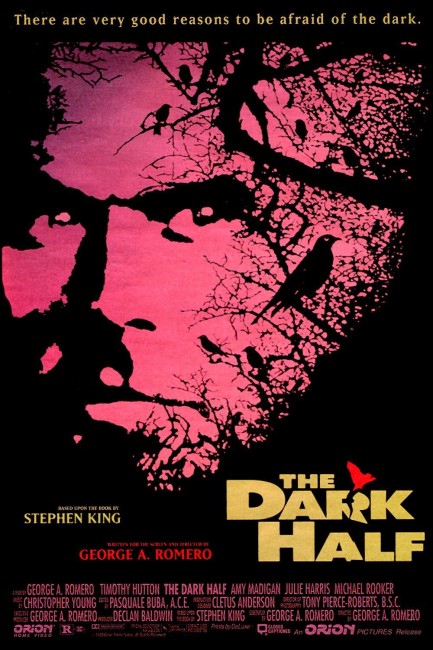 Thad Beaumont, an acclaimed literary writer and creative writing teacher, is approached by Fred Clawson who has worked out that Thad also writes a series of highly popular, ultra-violent thrillers under the nom de plume George Stark. Clawson demands money lest he reveal Thad’s secret. Instead, Thad and his wife call the press and set up a photo op with a fake tomb where they symbolically kill George Stark off. Soon after, police find that the mock grave has been dug up. Next, everybody associated with Stark and the press article starts being violently murdered. Thad makes the realisation that Stark, his dark alter ego, has physically come to life and is now coming after him, demanding that he write a new book.

In his novels of the 1990s, Stephen King has demonstrated a desire to expand his literary range – taking up a much more feminist stance with the likes of Dolores Claiborne (1992), Gerald’s Game (1992) and Rose Madder (1995), while in Misery (1987) and The Dark Half (1989) he examined his own dark side as a writer. Almost all the protagonists in Stephen King’s books are writers so it is not unreasonable to assume there is a reasonable degree of autobiographical content to these latter – Misery deals with obsessive fans and The Dark Half deals with noms de plume and how a writer can be taken over by the dark side they unleash on paper. The Dark Half makes for even more intriguing interpretation when one considers how Stephen King also wrote several books under a nom de plume – Richard Bachman – before this was eventually exposed by a fan Steve Brown in 1982, after which King likewise symbolically killed Bachman off.

The film adaptation of The Dark Half comes from George A. Romero, director of horror classics like Night of the Living Dead (1968), Martin (1976) and Dawn of the Dead (1978). (See below for a full list of George A. Romero’s other genre films). Romero had previously collaborated with Stephen King on a planned but never mounted adaptation of King’s epic The Stand (1978), which then morphed into the EC horror comic homage Creepshow (1982).

The Dark Half is an amazingly faithful adaptation of the novel – in fact, it is probably the most faithful adaptation of any Stephen King novel ever placed on screen. The only changes that George Romero affects in his screenplay are to start the present-day scenes with Fred Clawson threatening to expose Thad (whereas in the book the scene was recounted in flashback) and to change the character of Rawlie De Lesseps from a man to a woman. Some writers would give their eye-teeth for so little in the way of changes.

Certainly, the very faithfulness of the adaptation does magnify some of the novel’s faults. The book is a fast and highly enjoyable read – something that helps cover up the vagueness of King’s explanations for what is going on. However, we are never sure what created George Stark – with everything suggested from brain tumours to unformed twins absorbed into the brain, alter egos come to life and a literal manifestation of Thad’s dark side. Things are no clearer in the film either. Nor is one sure what the sparrows have to do with it all.

While the book is a breathlessly paced read, on the screen George Romero’s pace is somewhat more sedate. The Dark Half is certainly not a bad film but much of the exposition seems directed by Romero in a plain and visually uninteresting manner. The story needs more obsessiveness – it never fully gets inside Timothy Hutton’s boyish looks to show him being haunted by his doppelganger. Although, once the George Stark character emerges on screen in the latter part of the film, things pick up and Romero builds to an impressive climax.

Timothy Hutton is bland as Thad but has clear fun in the George Stark role. Michael Rooker makes for a reasonable version of King’s recurring character of Sheriff Alan Pangborn but his turn in the role was overshadowed by Ed Harris’s triumphant airing of the same role in the adaptation of Stephen King’s Needful Things (1993), which came out the same year as The Dark Half.

The Dark Half was originally completed in 1991 but its release was held up for two years by the financial collapse of Orion Pictures – and when the film did appear it was to mixed reviews and indifferent box-office. George Romero was once seen as one of the most promising genre directors of the 1970s and 80s but vanished almost altogether as a creative force in the 1990s until the renewed interest in zombie films in the mid-00s and he found his second calling beginning with Land of the Dead (2005).