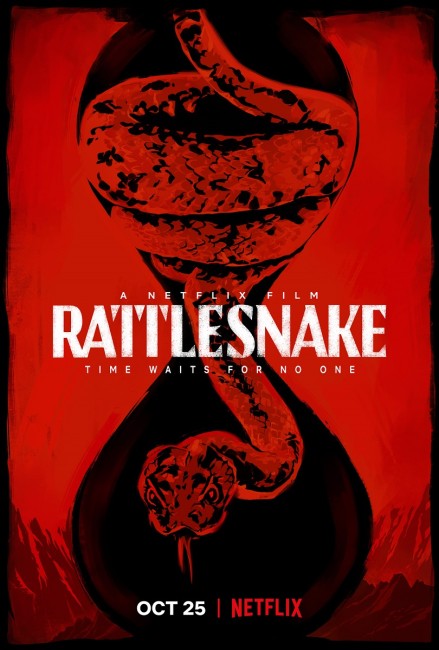 Katrina Ridgeway and her young daughter Clara are driving through Texas. She takes a backroad detour due to an accident ahead only to have a blowout in the middle of nowhere. While Katrina is changing the tire, Clara is bitten by a rattlesnake. Seeking help, Katrina goes to the only habitation in the area – a nearby caravan. The woman there says she can help Clara while Katrina fixes the tire. She does so and Katrina then rushes Clara to the hospital in nearby Turia only for the doctor to report that there is no evidence of any snakebite. A man then enters the room and tells Katrina that she has until sundown to pay the price – to claim another soul in Clara’s place – otherwise the venom will return to kill Clara. Katrina is then stuck with the difficult task of having to find somebody to kill.

Rattlesnake was the sixth film for Australian director Zak Hilditch. After making four regular Australian dramas that did not attain much attention, Hilditch made the impressive End of the World drama These Final Hours (2013). This clearly gained him enough attention to be brought to work in the US, beginning with the Stephen King adaptation 1922 (2017) and followed by Rattlesnake.

Rattlesnake has an original and interesting premise – what if one’s child suffered a lethal snakebite and the cure for it involved taking another human life? It is a variation on the Diabolical Pacts film. Things get undeniably interesting with the agency behind the deal – what it is is never made clear – taking over the bodies of what becomes apparent are other murdered victims to taunt Carmen Ejogo as she sets about trying to find someone to kill. (This is the second film in a row, following 1922, where Zak Hilditch concerns himself with a person struggling with the inner turmoil of committing a murder).

On the other hand, this is a script that feels more like an episode of an anthology film that has been spun out to a full-length running time. It also feels as though Zak Hilditch is avoiding grappling with the true moral difficulties that Carmen Ejogo would face. It is a film that delves into dark territory – a mother’s choice about whether or not she would kill someone to save her daughter – but avoids that darkness or soft pedals the options Carmen Ejogo faces.

When it comes to the first victim that Carmen selects – the old dying man in the hospital – she hesitates at going through with killing him and then finds that while she was in the bathroom the old man has passed away thus avoiding her having to make the choice. Her second choice of Theo Rossi is painted with ‘deserving victim’ all over him with scenes showing him as the abusive boyfriend of Emma Greenwell. Even then, it is not a case of Carmen killing him but a long drawn out scene where she takes him into the desert at gunpoint, where he escapes and then comes back to attack her just as the sun is setting. Even then they fight and Carmen gets her choice made for her when the rattlesnake returns and bites his leg, causing him to fall off the rocky outcrop. There it becomes no longer a matter of her cold-bloodedly killing him but merely finishing off someone who is already dying. It feels like a film with a crucial failure of nerve to ever push into something dark and follow through on its premise.