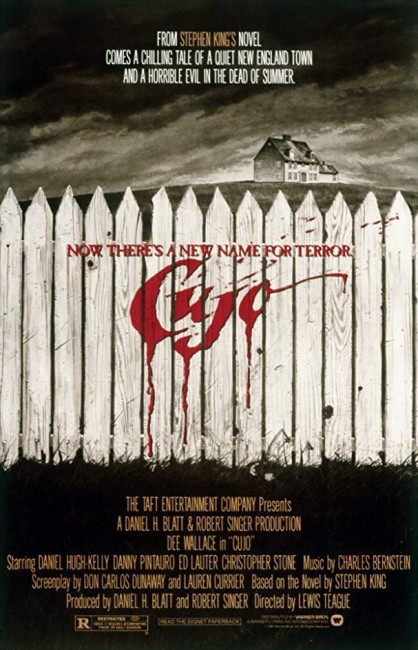 Donna Trenton’s husband Vic discovers that she is having an affair with Steve Kemp. Vic leaves town to sort things out. While he is away, Donna drives their car out to the Camber farmhouse to have it repaired. However, the car breaks down at the farm. Donna and her son Tad are then trapped inside as they are attacked by Cujo, a rabid St Bernard dog.

Cujo is a muchly underrated adaptation of the 1981 Stephen King novel. The film of Cujo was not much liked at the time it came out but has considerable merits. The screenwriters (and Stephen King who reportedly worked on the script but declined credit) have considerably streamlined the book. All the elements featuring the ghost of Frank Dodds (the killer from The Dead Zone) have been dumped, making Cujo a far more straightforward non-fantastic animals amok film, along the lines of Jaws (1975) and its body of imitators. Being a Hollywood film, it has also dumped Stephen King’s tragic ending where the son dies for a more upbeat note.

That said, Cujo works well. Director Lewis Teague, then previously known for the amusing B-budget hit Alligator (1980), was brought in at two days notice after Peter Medak, director of The Changeling (1980) and Species II (1998), quit. Teague does a highly impressive job. The first half concerning itself with Dee Wallace’s affair (the man she is having an affair with is real-life husband Christopher Stone) is less interesting. Although all concerned performed well, the characterisation is thin on the ground and it is merely prelude to the main action.

However, it is during the last forty minutes that Lewis Teague transforms Cujo into an outstanding orchestration of suspense and terror. The entire scenario is centred around Dee Wallace and Danny Pintuaro trapped inside the fragile refuge of a broken-down Pinto by the rabid dog outside. Teague restricts action entirely to this location – the suspense generates from the building and then shattering of each possible hope and unexpected turn of events. Lewis Teague uses every cinematic trick at his disposal – from crane cameras to 360-degree pans and cutaway cars. It is here that Cujo not unfavourably compares to the agoraphobic second half of Jaws (1975).

Lewis Teague subsequently returned to Stephen King material with the King-penned anthology Cat’s Eye (1985). Teague’s other genre outings are the future prison film Wedlock/Deadlock (1991) and the tv movie The Triangle (2001).