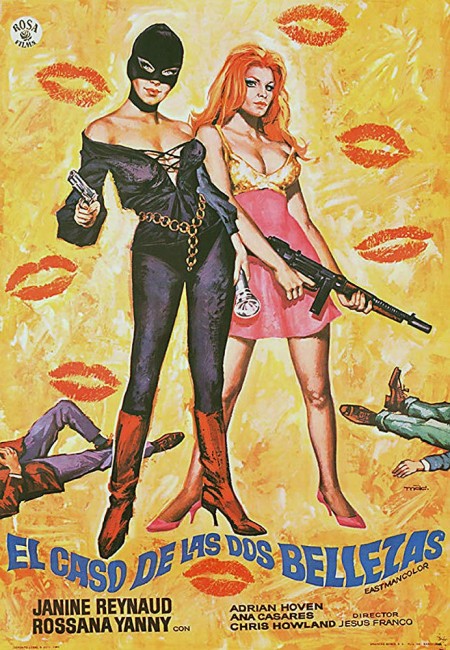 Model Lita Regnier is abducted, one of several such abductions that have occurred of recent. The masked thief Red Lips breaks in and steals a painting from an art dealer, leaving her trademark red lipstick print. She has been hired by the businessman Radek to find Lita who posed for the painting. Red Lips becomes obsessed with finding the enigmatic Karl Tiller, the artist who made the painting. Through Red Lips’s investigation, it becomes apparent that Tiller is the killer, painting the models and then allowing them to be killed by the beast Morpho that he keeps as his pet. Red Lips’s assistant Regina then becomes the next victim to be abducted by Tiller.

Between the 1950s and his death in 2013, Spain’s Jesus Franco became one of the most prolific directors in the world, sometimes making six or more films in a year. At final count, Franco has made 199 films. All his work falls into the horror, exploitation and pornography fields. Franco has developed a cult reputation – most of the fans’ time, one suspects, being spent trying to track down uncut versions or navigating through the labyrinth of alternate titles that Franco’s films are listed under.

Jesus Franco’s films have attained a cult but after seeing Sadisterotica, one cannot help but wonder what the Franco cult is all about. Sadisterotica is, like all of Franco’s films, cheaply and shoddily made. The emphasis in Franco films is always on gratuitous sexual sadism, something that reached a height with his notoriously extreme ventures into the women-in-prison subgenre during the 1970s. The version of Sadisterotica seen here gives the strong impression that most of the adult content has been edited out, which means that all that one is left with is a badly made film.

Sadisterotica also gives the impression it was trying to capitalise on the then-recent success of Mario Bava’s Danger: Diabolik (1967) with the heroine occasionally turning up as a masked thief, or perhaps as the thief heroine of Modesty Blaise – the original comic-book version as opposed to the dreadful film version Modesty Blaise (1966). (Franco had predated these and in fact featured the character of Red Lips and her assistant in an earlier film, the second film he directed, the much more obscure Red Lips (1960), although the two roles were played by different actresses). Although even then, the masked thief aspect is of minimal interest to the story.

The plot is a muddle – when the eye-patched killer’s identity is unmasked, you realise that it is the same person who hired the heroine to find the missing model and cannot help but wonder why he would hire someone to expose his own actions. This carelessness seems indicative of the indifference with which Franco churns material out. The film is weakly paced with Franco sidetracking into lame comic interludes, there being one particularly clumsy episode with Janine Reynaud trying to seduce an elderly gallery owner to get information. There are occasionally amusing lines – Janine Reynaud taunts a policeman: “You’re a policeman. Look for me. If you can find me, you can keep me.” Or when she is first introduced, she wakes up in bed and looks directly into the camera: “My God, one can’t get up when one hasn’t anything on,” and so the camera coyly turns aside and waits in head shot while she dresses.

As Red Lips and Regina, Janine Reynaud and Rosanna Yanni are not particularly good actresses – Yanni being better than Reynaud – although they at least strike up an engaging rapport with Yanni constantly trying to act level-headed up against Reynaud’s carefree desire to play. Oddly, the two characters are never given names on screen. The makeup on the beast creature is terrible. Franco himself can be spotted as the art gallery owner Napoleon Bonaparte who is killed early on in the show.