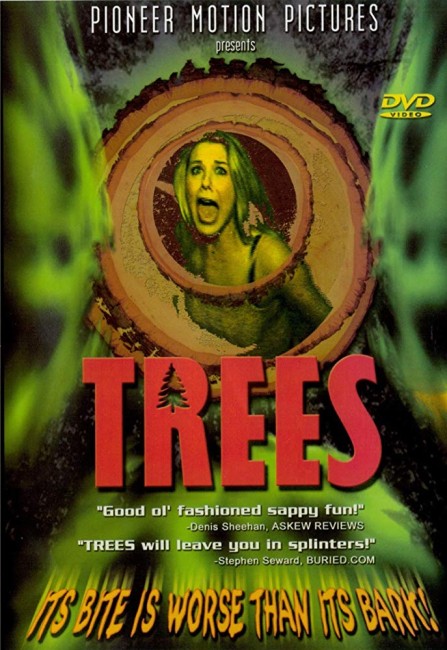 In Hazelville State Park, the head park ranger Mark Cody has to deal with a spate of deaths being caused by a killer tree. He wants to shut the park down but Mayor Swindell protests against doing so because of the nearing Memorial Day holiday season. Cody brings in Max Cooper, a tree expert and Tree Hugger of the Year. Swindell reluctantly authorises a tree hunt but Cooper is certain that the locals end up catching the wrong tree. After further tree attacks, Cody, Cooper and the lumberjack Squint head out into the woods in a truck determined to eliminate the killer tree.

Trees was fairly much the only note of distinction from Connecticut-based filmmaker Michael Pleckaitis. Aside from the film’s sequel, the only other film Pleckaitis ever made was Silent (2008) in which a silent movie heroine discovers the ability to speak. Trees, shot entirely on digital video, appeared to be a modest success.

The opening credits proudly announce that the film has been made as a homage to Jaws (1975). Essentially what has happened is that Michael Pleckaitis has copied all of the essential plot points of Jaws and replicated them with a killer tree in a state park (Black Rock State Park in Watertown, CT). There’s the initial attack on a couple fooling around, the sheriff (here a park ranger)’s certainty that it is a shark/tree, further killings, the mayor wanting to quell potential panic for the sake of tourism, the shark/tree scientist, the attack during Memorial Day weekend (even the scene where the kids play a prank), the scene where the mayoralty issues a shark/tree hunt but the wrong shark/tree is killed, the introduction of the crusty old timer, the venture out into the wilds in a small vehicle to trap and eventually blow up the shark/tree – even a scene where the scientist goes in to confront the shark/tree in a cage. There are even tiny touches like the graffitied billboard.

Even the characters are almost identically named – Chief Martin Brody/Ranger Mark Cody, Matt Hooper/Max Cooper, Quint/Squint. This does lead to some amusing interpolations – the scene where Quint scratches his nails on the blackboard is replaced by Peter Randazzo dragging a chainsaw down the blackboard. About the only scenes we don’t get equivalents of are the ones where Brody sits making faces with his kid. The funniest of these is the replication of the scene with the group on the boat telling war stories, which here degenerates into a drunken singalong of Old McDonald Has a Farm. We even get a lame gag where they open up the gut of the tree and find a tape entitled ‘Witch Project’ – The Blair Witch Project (1999) had been huge just before Trees was made.

You suspect that the replication of Jaws becomes too slavish – it ties Michael Pleckaitis in plotwise as there are very few scenes where he varies from the basics or creates new material. The main problem is that Pleckaitis is working with a low-budget and is stuck with trying to copy Jaws, which had a multi-million budget when it came to creating its shark. There is little money to create the film’s ambulatory tree menace and so what we are stuck with is a lot of tree point-of-view scenes as the never seen tree attacks people and one or two hurried shots of people trying to fight off branches being waved in their faces.

The sequel was Trees 2: The Root of All Evil (2004), featuring return performances from Kevin McCauley, Philip Gardiner and most of the supporting cast.