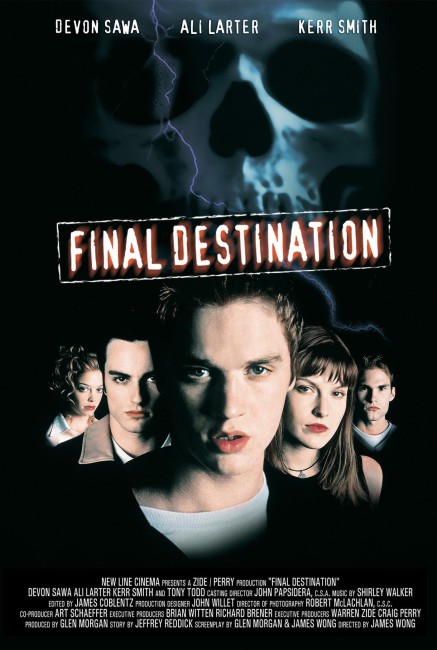 A class of students are about to depart on a field trip to France when Alex Browning has a vision of the plane exploding. In his panicked attempt to convince people what is about to happen, Alex and six others are thrown off the plane and it departs, only to explode just above the runway. Afterwards each of the survivors start to be killed in bizarre circumstances where everyday objects come together in lethal ways. Alex realizes that his precognition has allowed them to cheat their intended deaths but that fate is now determined to claim them.

Final Destination was the big screen debut of writing team Glen Morgan and James Wong. Morgan and Wong first drew attention with the script for Penelope Spheeris’s The Boys Next Door (1985) and for some of the best episodes of Chris Carter’s The X Files (1993-2002, 2016-8). Between them they wrote the likes of Beyond the Sea, the first season’s finest episode (which contains Brad Dourif’s most memorable hour as a Death Row precognitive), Ice, EBE, One Breath and Little Green Men, some of the most intensely paranoid of the conspiracy episodes; created the memorable character of the human Squeegee, Eugene Tooms, in Squeeze and Tooms; the haunting reincarnation story The Field Where I Die; the Jodie Foster-voiced possessed tattoo story Never Again; and the series single finest hour, Musings of a Cigarette Smoking Man.

Morgan and Wong also worked as writers and executive producers on Carter’s underrated serial killer series Millennium (1996-99) and were instrumental in turning its second season in a uniquely meditative direction that deeply questioned Western philosophical/moral values. In between assignments for Carter, Morgan and Wong created Space: Above and Beyond (1995-6), a beautifully written series about a space war as seen through the eyes of recruits in training that was killed off well before its time.

Final Destination was Morgan and Wong’s cinematic debut. (They did start off writing the script for Penelope Spheeris’s acclaimed, little-seen The Boys Next Door [1986]). This time Morgan and Wong are working from another writer’s treatment. The basic premise – a rehash of supernatural air disaster films like The Night My Number Came Up (1955), The Survivor (1981), Sole Survivor (1983) and sundry forgettable tv movies – is not so inspiring but this does not seem to matter as Morgan and Wong have never written a script that has been less than original and compulsive viewing. Final Destination uniquely manages to combine both the predominant themes of the burgeoning air disaster ghost story mini-genre – that of the passenger who has a precognitive vision of an impending crash – and that of the crash survivor who afterwards experiences supernatural retribution.

Despite all promise to the contrary, Morgan and Wong run completely aground here. The first couple of killings are inventive – in particular, the one where Amanda Detmer says she is not hanging around to be killed and turns around only to be creamed by a bus (a sequence that is unmistakably reminiscent of a scene from the Val Lewton classic Cat People (1942) – a point underscored by naming one of the characters in the film Mrs Valerie Lewton).

However, Final Destination‘s parade of novelty deaths become progressively more absurd. Kristen Cloke’s dispatch variously involves:– alcohol from a cracked glass leaking into a computer, which then explodes and impales her in the neck, accidental skewering by a rack of kitchen knives and an exploding house. The climax with Ali Larter being attacked by rupturing swimming pools, a collapsing garage, exploding tv sets, lashing electrical cables, nearly impaled by poles and trapped in an exploding car reaches a point where novelty becomes laughability. The script offers a couple of fair passages trying to rationalize everything but this gets forgotten and overtaken by the set-pieces.

Final Destination is clearly an attempt to rehash the aircraft survivor story for the post-Scream (1986) generation. Dutifully, Morgan and Wong stock it with the requisite number of genre in-references. All the characters are named after horror directors – Browning, Waggner, Siegel, Hitchcock, as well as a Terry Chaney and Mrs Valerie Lewton, even two investigating FBI agents named Wiene and Schreck (named respectively after Robert Wiene, the director of The Cabinet of Dr Caligari [1919] and Max Schreck, who played the title character in Nosferatu [1922]). Morgan and Wong get full points for showing up their dedication to less well-known directors – where Kevin Williamson quotes from Halloween (1978) and Friday the 13th (1980), Morgan and Wong go as far back as the 1920s and 1930s and refer to German silents. However, this is also an old hat game. Naming characters after genre directors was first done in Joe Dante’s The Howling (1981) and the net result, while cute, amounts to an overall so what. One expected more of Glen Morgan and James Wong’s entree into the postmodern teen genre than a spot-the-reference name-game checklist.

The teen cast are mostly anonymous. Ali Larter is the only one that stands out in a role of intriguing sympathy but the part is severely underwritten. Tony Todd gives a badly overacted cameo as a morgue attendant. Kristen Cloke, who has had substantial roles in all of Morgan and Wong’s series – The X Files, Millennium and Space (not too surprising in that she is also Mrs Glen Morgan) – appears as the aforementioned Mrs Lewton but, as with all of Cloke’s roles so far, it is one where she demonstrates a remarkable lack of expression.