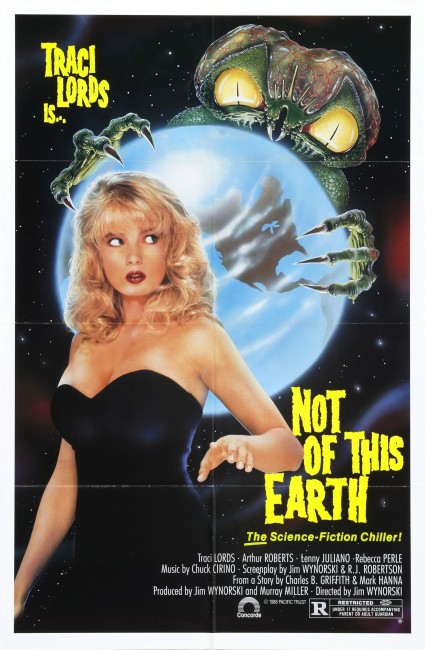 The mysterious sunglasses-clad Mr Johnson appears before a doctor, demanding a blood transfusion. The doctor discovers that Johnson’s blood is evaporating at a cellular level. He moves nurse Nadine Story into Johnson’s home to administer a series of transfusions. There Nadine and Johnson’s ex-con manservant discover that Mr Johnson is in fact an alien from the planet Davanna who has come to Earth to harvest humanity’s blood.

This is a remake of the Roger Corman no-budgeter Not Of This Earth (1957). Why such a minor film of no particularly classic stature is being remade is a mystery? In all likelihood, it is Corman the great penny pincher who probably figured he could save money by regurgitating a script. The remake adheres closely to the original. The main updating it receives is a good deal of sexual innuendo and any excuse for lots of naked women.

Former Penthouse Pet (and the director Jim Wynorski’s girlfriend) Monique Gabrielle has a truly awful cameo as a bag lady with a tennis racket. Becky LeBeau gives a braindead performance as the strip-o-gram girl, which is matched only by Ava Cadell, Roxanne Kernohan and Cynthia Thompson (all four actresses who are noted only for their ability to take their clothes off in a film) as three hookers who seem to share about a single brain cell between them.

All of the effects sequences are pirated from other New World films – the opening credits sequence are a montage of effects shots from New World movies such as Piranha (1978), Battle Beyond the Stars (1980), Humanoids from the Deep (1980) and Galaxy of Terror (1981). The end credits note that “unauthorized copying etc … will be subject to criminal prosecution … not to mention a one way ticket to Davanna.”

The film was further remade as Not Of This Earth (1995), part of the cable series Roger Corman Presents, this time starring Michael York as Mr Johnson.