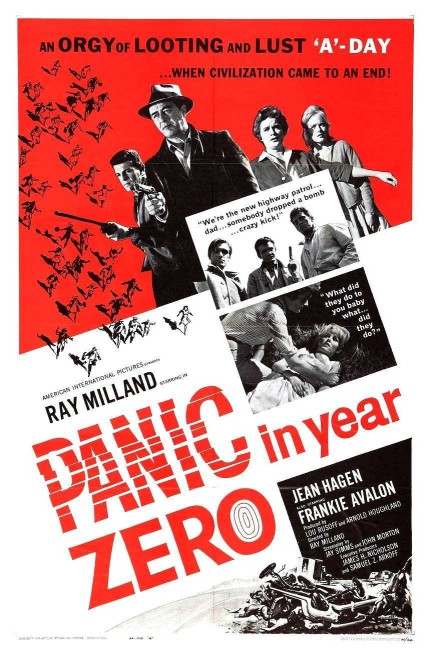 Harry Baldwin heads off on a fishing and camping trip with his wife and two children just as Los Angeles is hit by a nuclear strike. Harry decides the best option for their survival is to stockpile provisions and head for a remote cave. In their journey to get there, they face lawlessness and anarchy around them as civilised society starts to collapse, necessitating that Harry adopt increasingly ruthless methods to ensure their survival.

Panic in Year Zero! was made at a time during the 1960s when the imminent concerns for the nuclear holocaust on cinema screens had passed from the realm of B-budget monster movies like The Beast from 20,000 Fathoms (1953), Day the World Ended (1955) and Godzilla, King of the Monsters (1954) into the realm of grim realism. This was a move that had started with On the Beach (1959) and was followed with the likes of The Day the Earth Caught Fire (1961), Dr Strangelove or, How I Learned to Stop Worrying and Love the Bomb (1964), Fail-Safe (1964) and The War Game (1965).

Panic in Year Zero! was produced by American International Pictures who had bankrolled most of Roger Corman’s films. It is a better budgeted production than their usual fare and features one of a handful of directorial outings made by actor Ray Milland. Ray Milland was a peculiar actor – he seemed almost permanently sagging and jowly and one strains to think of any film where Milland’s face radiated anything other than a dreary unhappiness. Milland’s most famous part was his Oscar-winning role as the alcoholic in The Lost Weekend (1945) but thereafter and until his death in 1983, Milland was cast in B movies.

Panic in Year Zero! would seem to represent something personal on the part of Milland. Indeed, if it that the case, it probably goes a long way to explaining what it was that Milland seemed so perpetually unhappy about. Most post-holocaust films represent a libertarian fantasy. The belief that after the downfall of society man will be left to fight for his own individual freedom and that everything will become a kind of dog-eat-dog survival of the fittest. Mad Max 2 (1981) and its endless imitators transformed that into an action movie heroism. Some films like The Ultimate Warrior (1975), The Postman (1997), the British tv series Survivors (1975-7), the US series Jericho (2006-8) and mini-series like The Day of the Triffids (1981) and The Stand (1994) argue that mutual communal subsistence will triumph over hardline Darwinian survivalism, but the majority of post-holocaust films are little concerned with social realism more so than they are with the fantasy of using the arena of brutal survivalism as a testing ground of an action hero’s manhood.

Along with the British No Blade of Grass (1970), Panic in Year Zero! represents the libertarian survivalist fantasy at its most brutal. In one scene, Ray Milland goes to buy a gun for self-protection and when the store owner insists that Milland observe the law and wait the requisite number of days before the purchase can be granted and that Milland not pay by out-of-state cheques, Milland deems such bureaucratic insistences an impediment to his immediate survival and feels justified in turning the gun around and robbing the store owner. Son Frankie Avalon is told to hold the store owner at gunpoint: “If he makes one stupid move, shoot him.” In another scene, Milland attempts to buy petrol, only to encounter a profiteering gas station owner charging exorbitant rates whereupon he punches the owner out and forcibly takes the gas.

When Milland finds his route to the lakeside retreat barricaded by townspeople wanting to keep troublemakers out, he and Frankie Avalon contrive to start shooting and crash their car through the barricades. Next, when Milland finds they are unable to cross the highway because of the unending flow of traffic, he (in a move that would otherwise be regarded as criminally jeopardous) spills petrol across the lanes of traffic and then ignites it, causing a traffic foul-up that allows him to cross freely. Later when the three men attempt to rape Mary Mitchel, Milland and Frankie Avalon take it upon themselves to burst into the house where the men are hiding out and while they have the surprise shoot two of them in cold-blood.

All of these actions are presented as presented as justifiable by the necessity of survivalism and the film lacks any discernible critique of the morality of acting in such a way. Early in the film, Ray Milland explains his reasons for seeking refuge in the countryside – “I’ll return when civilisation becomes civilised again.” (Interestingly, at this point in the film we have not seen any examples of uncivilised behaviour – the uncivilised behaviour being referred to is entirely presumed upon Milland’s part).

This line proves of considerable amusement as the film progresses for the film seems to lacks any capacity to see that if every person were to engage in the self-first survival methods that Milland’s character is opting for (irrespective of whether they feel justified or not) then the result would be exactly the same uncivilised anarchy that Milland fears. The film ends with the comforting restoration of the civilised status quo, represented by the appearance of an armed military escort.

Panic in Year Zero! is a repellent film in most regards. The unflinching brutality of Ray Milland’s outlook takes one aback – and even more when one sees it is clearly an outlook that Milland himself favours (noted by the lack of criticism made of this worldview and the way that Milland makes himself a mouthpiece for these views as actor).

In this latter regard, it is amusing to see how the Milland character reacts to the downfall of civilisation. Whereas in most other post-holocaust films you might expect characters to slowly start piecing their means of survival together, Milland appears to have almost have been waiting for the occasion. The moment the disaster happens, not a concern does he spare for relatives in the city or anybody else, rather he launches forth with a detailed list of practical survivalist advice, even lengthy lists of the provisions they will need. The character’s instant transformation from vacationing family man to practical hard-headed survivalist immediately able to deal with the situation is amusing to watch.

Even as a father figure, Milland manages to come across as what would today be regarded as a control freak – the film never shows the family disagreeing with him but it is hard to imagine this being a family unit where dissent with the father figure is in any way tolerated.