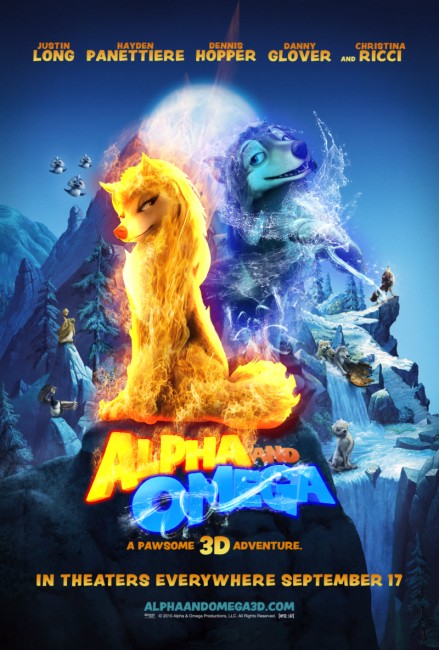 Humphrey and Kate are wolves that grow up together in Jasper National Park. Kate comes from the Alphas of the pack. She is then taken away to Alpha training school and returns in command of her hunting facilities as a full Alpha. She can no longer regard Humphrey as worthy of her as he belongs to the Omegas who are the bottom of the social order. It is arranged that she will mate with the handsome Garth. However, after finding that Garth has no howl, she tries to slink away. Humphrey and Kate are then shot by tranquilliser darts and transported into the wild to be released there. There two of them try to make their way back to Jasper, hitching a ride via various human conveyances. Throughout this, Kate comes to discover feelings for Humphrey.

Alpha and Omega was the debut film from Crest Animation, a newcomer into the lucrative theatrical animation stakes. Obviously desiring to compete with Pixar, DreamWorks, Disney, Blue Sky et al, Crest released Alpha and Omega in the near ubiquitous 3D process that all animation seems to come as these days. It is co-produced by Richard Rich, a former Disney director who made efforts such as The Swan Princess (1994), The King and I (1999) and The Trumpet of the Swan (2001). Disappointingly, Crest Animation has done nothing else since except churn out sequels to Alpha and Omega and Rich’s The Swan Princess.

Going on its own terms, Alpha and Omega is an okay film but never any more than that. On the other hand, what would probably have been a perfectly acceptable work say around the year 2000, looks like B-budget animation in 2010. There seem too many other animated films around at the moment, all of which seem to be pushing the envelope in terms of the technology, which only causes Alpha and Omega to vanish into an anonymity.

Alpha and Omega has a certain amiability – however there is the tendency to allow scenes to degenerate into slapstick, a problem with lesser animated films that don’t seem to clue in to the fact that class lies in pitching the film to the adults as well, not just offering up easy audience-pleasing humour for the single digit age group. Thus we have much in the way of scenes with the Omega wolfpack careening around and tobogganing on tree trunks, with a golf-playing goose, or dances where the wolves mimic the biker and his librarian girlfriend. Some of the lamest scenes are the ongoing gags where Garth’s attempts to howl causes birds to fall from the sky every time he misses the note. I mean, how seriously can you take a film that has wolves howling set to song.

Everything in the plot is eminently predictable – you can see the attractions that are going to grow between the various characters, the life lessons that each of them are going to learn and there are no surprises as each of these transpire. All the supporting characters have their predictable arcs. The basics of this, love across social barriers where the young lovers must defy tradition, are all taken from William Shakespeare’s Romeo and Juliet (1591-5?) – albeit rewritten with talking wolves as the characters and a few road movie basics added to the mix. The plot is largely one of convenience – it is never explained why Humphrey and Kate have to be tranquillised and transported into the wild, for instance, which leaves a gaping hole given that much of the film depends on this.

One also has a problem with the film’s description of the terms Alpha and Omega. (Not exactly the readiest title that comes to mind for an animated film either). These are nomenclatures taken from animal behaviour, however you get the impression that at most the filmmakers have simply looked up what the terms means and done nothing to study how they correspond to real behaviour in a wolfpack. The term Alpha is applied to the most dominant breeding male and female of the pack, the ones who usually produce offspring; the term Omega is used to refer to the least dominant who is supposedly made to eat last. These are terms that refer to one individual (and their mate), not an entire group. Usually all wolves in a pack are bred from a common parentage, whereas the film tends to regard them more as a human community made of individuals from different families. The more common way would be to regard the wolfpack as a large family with a number of children – the Alpha is simply the parents at the head of the family. Moreover, the concept of Alpha males and females is something that was based on the study of wolf behaviour in captivity, whereas modern studies of wolfpacks in the wild have shown that such dominance structures largely do not exist.