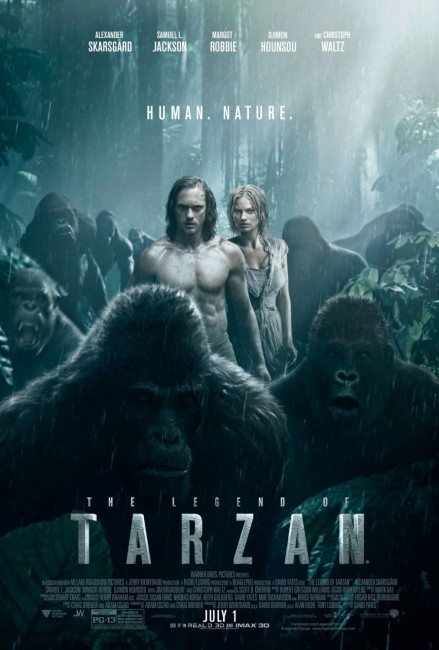 The year 1890. During the colonisation of the Belgian Congo, the explorer Leon Rom, King Leopold II’s right hand man, seeks the fabulous jewels of the forbidden city of Opar. The chief offers them in trade if Rom will bring Tarzan to him. Tarzan, John Clayton, the third Earl of Greystoke, is living in London with his wife Jane Porter. Rom makes an approach via the British Government, requesting that Tarzan visit the Congo. Tarzan at first declines but is persuaded to go by the American George Washington Williams. Accompanied by Jane, Tarzan returns to Africa where he is horrified to find slavery of the natives and slaughter of elephants for ivory. With Jane captured by Rom, Tarzan must head through the territory where he grew up to confront the chief of Opar who seeks revenge against Tarzan for the death of his son.

Tarzan was the creation of Edgar Rice Burroughs (1875-1950) in his novel Tarzan of the Apes (1912), first published in All-Star magazine and then in book form in 1914. Burroughs went on to write a further twenty-one Tarzan books. However, it is largely on film that Tarzan has gained his greatest life, beginning with the silent film adaptation Tarzan of the Apes (1918) starring Elmo Lincoln. The most famous incarnation was Johnny Weissmuller in MGM’s Tarzan the Ape Man (1932), which he repeated for a further eleven films before other actors inherited the role.

It is with the Weissmuller Tarzan films that many of the cliches and jokes we associate with Tarzan – the pidgin English and “Me Tarzan, You Jane” jokes, the loincloths and leopard skin bikinis, the parody of domestics bliss in the treehut, the comic relief scenes with Cheeta – all originate. The MGM (and later RKO) films are rarely worthwhile – apart from the first two Weissmuller entries Tarzan the Ape Man and Tarzan and His Mate (1934) – being cheaply made on a studio backlot with stock animal footage (it would be twenty years into the series before any of the films went on location to Africa) and featuring formulaic, interchangeable plots with evil trappers/treasure seekers/adventurers or marauding natives. The series however did pick up with Tarzan’s Greatest Adventure (1959) where the copyright was taken by producer Sy Weintraub for a series of films that stripped the cutsie elements out and created some genuinely exciting actions sequences that were shot in various locations around the world.

The Tarzan film of the 1970s and beyond has never found the same success that the films did back during their heyday. It may that the times changed – with the closing off of the unexplored world, the idea of mysterious exotic Africa lost its mystery, while more modern issues like environmentalism, concern for endangered species and the political instability of the African continent does not sit easily with the Tarzan story, which always inhabits a colonial era fantasy of Africa. Modern Tarzan films have tended to reinvent him as a long-haired eco-warrior. And then there have been versions that seem to be searching for some way to get a new handle – the softcore Bo Derek film Tarzan the Ape Man (1981); parodies like Tarzoon, Shame of the Jungle (1975) and Tarzan in Manhattan (1988); or being reworked alongside talking animals in the Disney animated film Tarzan (1999).

One of the oddities of the Tarzan films from the Johnny Weissmuller incarnation onwards is that they eliminate Tarzan’s origins. Burroughs always had him as the son of John Clayton, the British peer Lord Greystoke, who was shipwrecked on the African coast with his pregnant wife where they were killed and the infant adopted by a family of apes. This was restored in the magnificent Greystoke: The Legend of Tarzan, Lord of the Apes (1984), which rewrote Burroughs’ pulp adventure as a beautiful English period drama. The Tarzan films made since then – Tarzan and the Lost City (1998) (which this has much in common in terms of plot), the Disney film, Tarzan (2013) – have been much more cognisant in incorporating this aspect into their story.

The Legend of Tarzan certainly builds on the Greystoke interpretation to the extent that you could almost call it a sequel. It shows a Tarzan who has settled in England and welcomed the aristocratic lifestyle, even if he has never left the ape in him behind. Greystoke seemed to look down its nose at the adventure and action aspect that has been a central element of every other Tarzan film and indeed the Edgar Rice Burroughs novels. The Legend of Tarzan then could be a sequel to Greystoke that brings the adventure element back into the story.

The film comes from David Yates, a British tv director who emerged onto cinema screens with Harry Potter and the Order of the Phoenix (2007) and became the director most associated with the Harry Potter franchise, directing every subsequent entry through to Harry Potter and the Deathly Hallows Part 2 (2011), as well as the spinoff series beginning with Fantastic Beasts and Where to Find Them (2016). In Yates’s hands, The Legend of Tarzan is a lushly beautiful production. Yates and crew have gone to Africa to shoot and the landscape is sweeping. A host of visual effects houses have come on board to deliver all the vine-swinging action and very detailed and realistic apes.

The main complaint for me was that, while the film did a fine build-up to the adventure, the latter half feels like too many big, epic action scenes that have been constructed solely for how they look in 3D – Alexander Skarsgård swinging on vines that seem to improbably stretch for hundreds of feet; the fight/shootouts with the apes; the race to board the train; the climactic animal stampede and fight aboard the paddle steamer. As with a lot of films in this vein, the constant reaching for CGI affect eventually blurs into much of a muchness that lacks impact.

That said, The Legend of Tarzan had me intrigued about its particular take from its opening title cards. A couple of the namedrops suggested all manner of fascinating possibilities (and that the scriptwriters had done their research). The first of these was reference to the city of Opar. Opar is the most famous of the lost cities that regularly turn up in Burroughs writings.. Appearing in four Burroughs books beginning with the second, The Return of Tarzan (1913), it is filled with a horde of incredible riches and inhabited by a race of beast men and normal women whose priestess takes a liking to Tarzan. Opar has appeared in a couple of the silent movie Tarzans, Tarzan and the Lost City and the tv series Tarzan: The Epic Adventures (1996-7), where it has been characterised as a general lost city, while Philip Jose Farmer wrote a series of books using it as a locale.

The other intriguing aspect is the film choosing to locate Tarzan’s Africa in the Belgian Congo amid reference to King Leopold II and the Force Publique. The Congo Free State was established by Belgium’s King Leopold in 1885, where he ruthlessly pillaged the area for its ivory and mineral wealth and in particular rubber. The entire population was enslaved and it became perhaps the worst atrocity in European colonial history with an estimated ten million Congolese slaughtered before Leopold received international condemnation. Unlike the happy ending the film writes here, it took a further twenty years on from the film’s timeframe before the slavers and rubber trade was brought to an end. (The character of George Washington Williams played by Samuel L. Jackson was also a real person, an African-American soldier/minister/journalist who was the first person to report on the atrocities in the Congo, while Leon Rom was a Belgian soldier stationed at Stanley Falls noted for the brutality of his authority, which included keeping severed native heads in his garden, who is believed to have been the source of source of inspiration for Colonel Kurtz in Heart of Darkness (1899), Joseph Conrad’s novel based on his real-life experiences in the Congo). These are aspects that announce from the very opening that the writers are respecting the source novels and making a very fascinating attempt to tie Tarzan into real-world history.

The new Tarzan is Alexander Skarsgård who became a leading man ever since his charismatic appearance as the bad boy vampire in tv’s True Blood (2008-14). The very tall (6’4″) Skarsgård is impressively buffed in the part. On the other hand, Skarsgård plays fairly much the same way he always does such that what we end up with is a very internalised Tarzan who broods and never says much. Margot Robbie gives us much more of a forthright Jane, someone who holds her own in the action rather than spends the time being a romantic foil or making home in the treehut where she has tended to be relegated in the past. I have a good deal of liking for Christoph Waltz even if his best performances are those that have always been boosted by the advantage of Quentin Tarantino dialogue. Here he does okay but you cannot help but feel that his entire performance, right down to his style of dress and interest in the heroine, has been lifted almost completely from Paul Freeman’s Belloq in Raiders of the Lost Ark (1981).