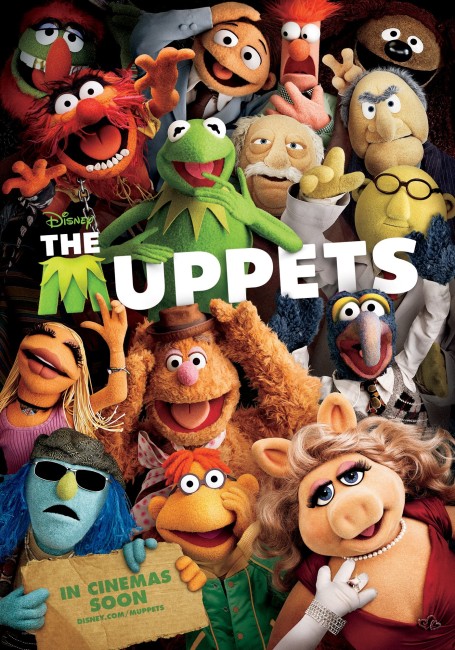 Walter grows up in Smalltown with his brother Gary and becomes accustomed to the fact that he is different. He then discovers ‘The Muppet Show’ on tv and becomes a fanatical Muppet fan. Gary decides to take a trip to L.A. with his girlfriend Mary to celebrate their ten-year anniversary and invites Walter to come too. Walter is delighted at the opportunity to go on a tour of the Muppet Studios, although they find the studios to be in a heavily dilapidated condition when they arrive. Walter wanders away and enters Kermit’s old office, only to overhear the plans of entrepreneur Tex Richman to demolish the studio to drill for oil because of a loophole in the contract that requires the Muppets to come up with ten million dollars. Horrified at this, Walter, joined by Gary and Mary, sets out to prevent Richman’s plans. They find Kermit’s Hollywood home and persuade him to reunite the Muppets. They set out on a journey, which includes taking a drive to Paris where Kermit has difficulty reconciling with Miss Piggy who is now the editor of a fashion magazine. Back in L.A., they manage to obtain a two-hour network slot to hold a telethon and then set out to refurbish the old theatre and prepare the act. Meanwhile, Richman plots to cause them to fail.

The Muppets were one of the great pop culture phenomena of the 1970s. Created by Jim Henson, they appeared in the hit tv series The Muppet Show (1977-81), which wittily spoofed and deflated the variety show format by playing everything with puppets who interacted with weekly big-name guest stars of the day. The show had a double level of humour – on one hand, the talking animal puppets were there for the kiddies, while on the other, the humour had a sophistication and guest stars that came from an era that was aimed at an older audience. The Muppet Show also came out around the same time as blonde bombshell Farrah Fawcett went stratospheric and the show cannily pitched Miss Piggy as a parody of celebrity, even allowing her to give interviews to magazines.

The series was at its height of popularity when Jim Henson and co spilled it over onto the big screen for the highly successful first film outing The Muppet Movie (1979). This spawned several further films with the equally sharp and witty The Great Muppet Caper (1981) and the weaker The Muppets Take Manhattan (1984). By the mid-80s, Henson had cancelled The Muppet Show after four seasons and seemed in interested in taking his puppetry in more serious and technically sophisticated directions with directorial outings such as The Dark Crystal (1982) and Labyrinth (1986).

Unfortunately, Jim Henson died in 1990. Thereafter began the second chapter of The Muppets. Following Jim’s death, the Henson empire was inherited by his son Brian. A few years later, Brian Henson began to revive the Muppets in a series of insipid cinematic outings with the likes of The Muppet Christmas Carol (1992), Muppet Treasure Island (1996) and Muppets from Space (1999), as well as a short-lived tv series revival Muppets Tonight (1996) and four tv movies It’s a Very Merry Muppet Christmas Movie (2002), Kermit’s Swamp Years (2002), The Muppets’ Wizard of Oz (2005) and A Muppet Christmas: Letters to Santa (2008). Most of these simply cast the Muppets in adaptations of classic stories. The more these films continued under Brian Henson, the more the charms of the original became strained until the characters felt like they were going through their paces without inspiration.

The Muppets wants to convince us that it is a reboot of The Muppets. Although The Muppets’ Wizard of Oz did receive a miniscule theatrical release in some areas, The Muppets is the first Muppet film to obtain a widespread release in twelve years. The film plays much on the idea that the Muppets have been absent for a long time – we are given the impression that this has been since the 1980s – but in truth it has only been three years since we have had a Muppet film and it does seem a little precious to be suggesting that they are in need of a reboot after only that length of time.

On the other hand, The Muppets is the first Muppet film produced solely by Disney (who have held the copyright on the Muppets since 2004) and Brian Henson and his Jim Henson Productions company are nowhere to be found. Many of the established Muppet performers – Steve Whitmire, Dave Goelz, Bill Barretta, Eric Jacobson – have returned, although noticeably absent is Jim Henson’s chief associate Frank Oz, the original voice of Miss Piggy. You cannot help but have a certain cynicism at seeing that the Muppets are now just another aspect of 1980s pop culture that is being resurrected – not to mention that the film comes with a number of blatant product plugs for Disney’s Cars 2 (2011), which was released to dvd a week before The Muppets hit theatres.

The Muppets reboot is placed in the hands of James Bobin who makes his feature-length directorial debut after work as a director on cult comedy tv shows such as Da Ali G Show (2000-4) and Flight of the Conchords (2007-9). (Flight of the Conchords star Bret McKenzie is also the film’s music supervisor). The script is written by lead actor Jason Segel, who has become a rising name in recent years in the tv series How I Met Your Mother (2005-14).

The surprise about The Muppets, coming after the lowered expectations of Brian Henson’s films, is that it works. Jason Segel and James Bobin have gone back and studied the original Muppet Show and the first two movies and completely get Jim Henson’s sense of humour – the parody of the variety show format, the groan-worthy puns, the fourth-wall breaking gags, the sweetly charming but never maudlin sincerity that underlies everything – and The Muppets is easily the most enjoyable Muppet movie since at least The Great Muppet Caper.

The plot is essentially a reheated variation of wacky road trip plot of The Muppet Movie by way of The Blues Brothers (1980) – band members must go on a journey to reunite the old gang in order to play a concert and save the studio from demolition. That and maybe a few dashes from Peter Jackson’s hilariously obscene Muppet parody Meet the Feebles (1990) and its plot centred around the backstage problems with a variety show in the hours counting down to the big performance. The story is very much a backwards looking one – about helping the Muppets reunite and regain the standing they once had. To this extent, the film is filled with recreations of the sets, copies of the merchandising, posters and clips from the original show and plentiful references to guest stars, gags and plot elements that were introduced in the tv series and films, even revivals of familiar Muppet songs.

James Bobin and Jason Segel people the film with sly gags in perfect Jim Henson style. There are a number of songs – an aspect that was written out of or downplayed by the more recent Muppet films. All of these have witty lyrics and some are even rather clever, like where Jason Segel and Walter do a number about wondering whether either is more Muppet or man and each is accompanied by a mirror Muppet/human version of themself (this won the Academy Award for Best Song that year). As with the early Muppet films, there are star cameos aplenty, including from Jack Black, Mickey Rooney, Whoopi Goldberg, Neil Patrick Harris, Selena Gomez, Sarah Silverman, Emily Blunt, Kristen Schaal, Zach Galiafakanis and Alan Arkin.

There are all the classic fourth-wall breaking gags that Jim Henson loved:- “Looks like they [the rest of the Muppets]’re not going to get back to you any time soon,” says Amy Adams to Kermit. “This is going to be a really short film.” As Gonzo’s factory blows up, Fozzie comments, “That’s an expensive looking explosion – I can’t believe we had it in the budget.” “Can we save time and use a montage?” the 80s Robot suggests when it comes to the reuniting of the lesser Muppets. Much is made of a device known as Map Transfer where people can travel from one point to another by employing an Indiana Jones-styled map route – including driving from the US to France.

The results come together in a very lively package and The Muppets proves some of the most unabashed family-oriented enjoyment that one has sat through in a theatre in some time. It brings the Muppets back to being something clever and fun rather than being just for kids. Just the way that Jim Henson always intended them.

The same creative team reunited for a sequel Muppets Most Wanted (2014), followed by a revival of the tv series with The Muppets (2015-6).

James Bobin subsequently went on to make Alice Through the Looking Glass (2016) and the live-action film of Dora the Explorer and the Lost City of Gold (2019).