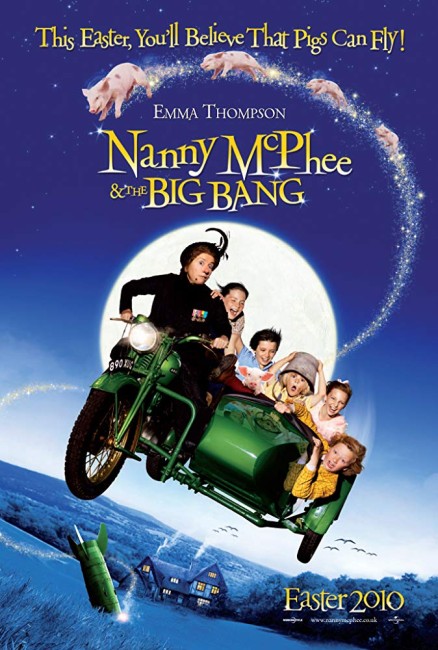 Isabel Green is struggling to maintain the farm and look after her three unruly children while her husband Rory is off fighting in World War II. Rory’s brother Phil keeps pressing Isabel to sell the farm, arguing that she will not have any money to make the payment on the tractor to reap the harvest in a few days. Unknown to her, Rory wants his half of the farm sold so as to pay off his gambling debts. At the same time, Isabel’s toffee-nosed nephew and niece Cyril and Celia Gray are sent to stay at the farm away from the bombing in London. As Isabel reaches the end of her tether, a mysterious voice suggests that she needs Nanny McPhee. Nanny McPhee then turns up at the door. Using her magic, she is able teach the children a series of lessons in good behaviour and cooperation. Meanwhile, the dastardly Phil frees the piglets that they were going to sell to pay off the tractor but the children recapture them with the help of Nanny McPhee’s magic. Then comes the shock news that Rory has been killed in action, meaning that Isabel has no choice but to sign the papers to sell the farm.

I confess that I never much liked Nanny McPhee (2005). It was a middle-of-the-road effort that trod where Mary Poppins (1964) went before without much spark. Interestingly, the script came from the pen of British actress Emma Thompson, who herself played the title role, where she loosely adapted a series of children’s stories from the 1960s. Thompson both stars and writes in this sequel, which again comes from the UK’s Working Title production company.

Nanny McPhee & the Big Bang (known as Nanny McPhee Returns in the US) is fairly much the same mix of elements as the first film – there is Emma Thompson’s Nanny who arrives mysteriously, hideously made up and takes over the household with a primly proper concern for good behaviour and the dolling out of lessons to the ill-behaved children; a story that follows a predictable arc about the transformation of the family she visits; a series of hyper-realised surroundings; hissable and obvious villain(s); and an occasional dash of magic. Nanny McPhee & the Big Bang never varies much from the formula established by the first film – about the only difference is a World War II setting and a solo mother rather than a father in charge of the family.

If one enjoyed, didn’t enjoy or remained fairly indifferent to the first Nanny McPhee, then Nanny McPhee & the Big Bang resembles the original so closely that one’s impressions are likely to be almost identical – in that I felt so-so about the first film, I had similar feelings about the sequel. New director Susanna White launches in with the same slapstick that ran throughout the first film – it is easy to spot who is down-to-earth and who is snobby as the everyday characters are shown as being at home on the farm, while all the others are slapstick butts of constant pratfalls where they are variously tripped, slip or dumped into mud, muck and water.

There are the same magical touches as the first film – at the most surreal, we get visions of pigs doing gymnastics in treetops and Esther Williams routines in the lake. The sequel also uses the same surreally exaggerated design schema as the first film – we go on an extended trip to London that appears to be filled almost entirely by Beefeaters and red phone boxes, while Lord Nelson’s statue tips its hat and a stone lion turns to look at them as they pass on Nanny McPhee’s motorcycle and sidecar. Naturally, being a children’s film involving a ramshackle vehicle, this dictates that the vehicle have to take to the air at some point.

The film ends on a cliched resolution that has appeared in a number of other children’s films set around the period of the World Wars – FairyTale: A True Story (1997), Five Children and It (2004) – of the children believing that the father is dead but seemingly being rewarded with his return at the end because of their contact with magical circumstances throughout the course of the film.