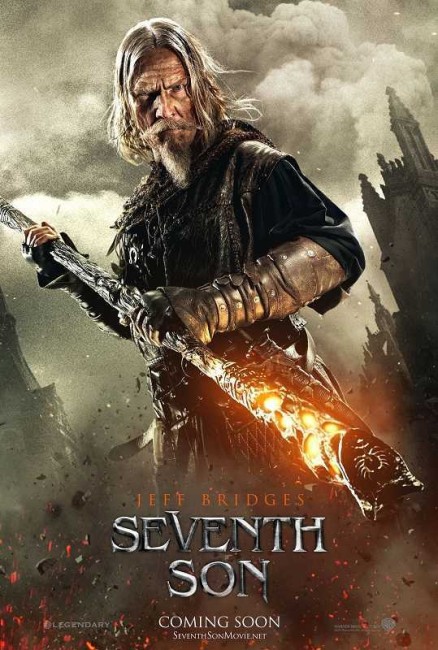 Master John Gregory comes to the home of the Ward family and trades gold coin to take on their son Tom as his apprentice. Tom is the seventh son of a seventh son meaning that he has powers to divine the supernatural. It is their job to kill witches and assorted supernatural creatures, although Tom learns that all Master Gregory’s previous apprentices have all been killed. Master Gregory places Tom through a punishing training schedule, wanting to ready him within one week to tackle the legendary witch Mother Malkin on the all-important night of the Blood Moon. Tom then sees Alice, a girl whose face has appeared in his dreams, as she is being dragged away by townspeople to be executed as a witch and intervenes to free her. He is attracted to her unaware that she is Mother Malkin’s granddaughter sent to spy on him. To be with Alice means defying Master Gregory but also means him being prey to Mother Malkin’s manipulations.

Seventh Son is an epic fantasy adventure. The production comes from Thomas Tull’s Legendary Pictures and several ancillary producing partners. The film is the widest release yet for Russian director Sergei Bodrov. Bodrov has been directing since the days of the Soviet Union but began to work in English-language films after moving to the US in the 1990s. Probably the work that gained him the greatest attention was Mongol (2007) about the life of Genghis Khan. Seventh Son bounced around schedules for much of 2014, appearing in some international territories towards the end of the year and into January but eventually only being wide-released in English language in February 2015, a traditional winter dead zone as far as most US distributors are concerned.

When I initially saw the title of the film, it left me with the momentary hope that the film might be an adaptation of Seventh Son (1987), the first of Orson Scott Card’s Alvin Maker series and one of his very best works. (For anyone listening, the Alvin Maker series would make an amazing tv series if someone were to do something along the lines of Game of Thrones (2011-9) even though they are very different works). Instead, Seventh Son is based on The Spook’s Apprentice (2004) by British author Joseph Delaney, the first in the Young Adult series The Wardstone Chronicles, known as The Last Apprentice series in the US. The series runs to thirteen books, the final of which was published in 2014, as well as two short story collections and an illustrated bestiary.

Seventh Son has been mounted as an epic fantasy. To this extent, it follows all the cliches that were laid down by The Lord of the Rings films – epic landscape shots, creature effects, ancient cities built up around hill and mountainsides, the flights of CGI dragons. This is all par for the course with the epic fantasy film; what is noticeable is that there is none of this in The Spook’s Apprentice.

The books take place in an alternate version of England that is inhabited by witches, ghosts and other creatures, notedly not a standard Tolkien-esque fantasy kingdom. In the first book, Tom Ward is meant to be twelve years old but his age has been bumped up to nearly three times that in the casting of 33 year-old Ben Barnes. In the book, Mother Malkin is a standard witch, not somebody who has the powers to transform into a dragon, doesn’t live in a ruined city on the side of a mountain, nor has a complicated backstory with Master Gregory, while her scheming is far smaller in scale than creating a reign of terror against the entire kingdom. We see some of Joseph Delaney’s material with the introduction of the boggarts and the explanation of the difference between ghosts and ghasts.

However, an accurate adaptation of the books should have come out something akin to Warlock (1989) or Season of the Witch (2011) but clearly the filmmakers and writers had no faith in a Mediaeval-styled fantasy, only in something that was tried and true and so drastically rewrote everything into an epic Lord of the Rings-styled fantasy. The effect might be akin to taking a Stephen King novel, dropping the horror elements and turning everything into an action film.

The impression you are left with is that someone brought up the rights to the books, thinking they would make for another worthwhile Young Adult film series a la Harry Potter, Twilight, The Hunger Games et al. While these are an object lesson in how to adapt a film series and faithfully respect the works in a way that they cater to the readership and build out loyal fanbase to come back for more, Seventh Son‘s indifference to the source material is an object lesson in how to try and pick up the ball with buttered fingers.

In terms of an epic fantasy, Seventh Son emerges slightly better in terms of its world-building and depth than some of the more tedious Lord of the Rings copies such as Earthsea (2004), Eragon (2006) and the In the Name of the King series. Yet there is still an extremely generic feel to it. Much of the costumes, the weapons, the creatures, the magic, even the choice of scenery shots all feels like it has been taken from a standard playbook. The visual effects and creature effects are all competent but unengaging. As each fight with the dragon or a creature occurs, it seems mildly impressive but by the end of the scene it stirs so little in you that you can barely remember what it was about.

Jeff Bridges is cast as the sagely knight mentor and does crusty as only Jeff Bridges can – but the entire performance is shot in the foot by the fact that he has chosen to deliver it in a silly voice. Similarly, as Seventh Son goes into release, Julianne Moore is a strong contender for a Best Actress Oscar for Still Alice (2014) but the role she has been given here is a one-dimensional one. As the romantic interest, Alicia Vikander seems too shy to ever project any presence. Ben Barnes has a handsome charm and it is largely thanks to he and the eventual settling in of Jeff Bridges’s silly performance that the middle of the film engages somewhat in the relationship between the two.