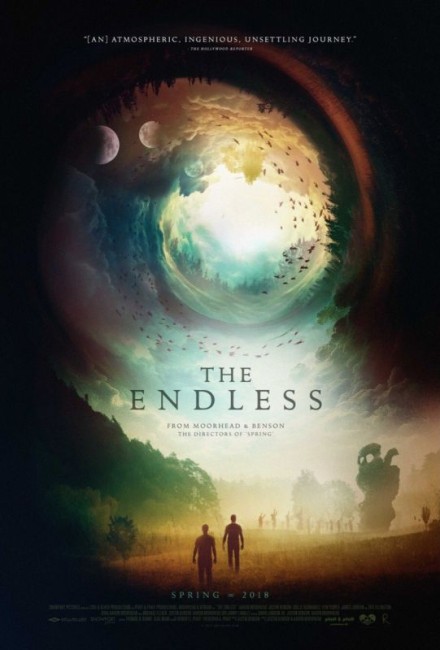 Ten years ago, brothers Justin and Aaron Smith made an escape from the cult at Camp Arcadia. They have since made appearances on tv denouncing the group as a UFO death cult and telling how the members practice self-castration. Their lives have been a struggle since leaving, especially in trying to earning a living. They now receive a videotape sent by one of the cult members. Aaron misses the life they had there and persuades Justin to take a trip back to visit the commune. Justin is sceptical but agrees to go along. There the two brothers are embraced and forgiven by the cult members who are not as the two of them portrayed them. They are told it is nearing the time of The Ascension. As they wander the area near the compound, they discover that some areas exist in timeloops where people are being forced to repeat the same events over and over. As they also become aware, something above is watching and sending them videotapes and photos to guide them on a pathway.

The directing/writing team of Justin Benson and Aaron Moorhead have gained increasing acclaim in recent years, becoming one of the most promising indie directing/writing talents out there as of current writing. The two first appeared with Resolution (2012) and continued through Spring (2014), an amazing film about a romance between a human and an immortal, as well as the Bonestorm segment of V/H/S Viral (2014) and the subsequent Synchronic (2019) about a drug that causes the user to time travel, as well as produced After Midnight (2019). Here Benson and Moorhead for the first time also play the lead actors in their own movie, appearing in the roles of two brothers also named Aaron and Justin. And they do not too badly in the parts either.

The Endless is a sequel to Resolution, although it is not a sequel in the usual sense of being ‘the further adventures of ____’. Peter Cillela and Vinny Curran, who played the two friends in Resolution, turn up in the middle of the film in a haunting section where Justin comes across their house along the trail and sees that they are caught in a timeloop that began around the start of Resolution and ends with Cilella setting fire to the house whereupon the entire scenario snaps back to the start again. Emily Montague also makes a return appearance as Peter Cilella’s wife mourning his disappearance.

Rather than a sequel, The Endless could be considered more as a film that approaches the same phenomena from a different perspective, features the same enigmatic entity observing and widens the stage of the events. On the other hand, it is also a film that leaves even more questions about what is going on in either film than it goes any way towards answering them. If anything, what we have here is more akin to YellowBrickRoad (2010), which concerned a group of people travelling along a backwoods trail where reality was breaking down and events were becoming increasingly more surreal and strange.

The first half of the film is ostensibly a story about a cult and two ex-members reuniting with the group after several years. The story seems to be heading towards the cliche arc taken by a number of other films about cults – see the likes of Servants of Twilight (1991), Breaking the Waves (1996), Believers (2007), End of the Line (2007), The Reaping (2007) and The Invitation (2015) – where we are introduced to a cult (usually of the doomsday variety), become horrified at their activities before an abrupt twist ending that pulls back and reveals that their prophecies were right all along.

By contrast, The Endless seems to set out to defy all the cinematic cliches about cults. In contradiction to what we expect, the cult members prove to be friendly and welcoming, while the nominal leader (Tate Ellington) openly admits he does not have all the answers. Rather than any sense of liberation at their escape, the two brothers are shown as having missed the sense of family offered by the cult and felt its draw because their lives have felt a downhill slide towards a lack of success or direction ever since they left. There is even a scene where the cult’s leader expresses his anger at the way the two brothers have misreported them to the media, claiming that they were a UFO doomsday cult and practiced ritual self-castration, when none of this is true. (Although you do feel that the film could have made more dramatically out of this – like ask why the two brothers sought to perpetuate such untruths).

What makes The Endless work is its sense of uncanniness. There is the intensely weird scene where Justin follows a trail into the woods, the sky seems to momentarily black out and then he finds himself surrounded by a circle of photos, while a tree casually collapses in the background. Upon his return to camp, he later sees there are now two moons in the sky. Later a dive into the lake produces a box containing more photos that appear to have been taken by someone looking down from above. A hut in the midst of the trail mysteriously vanishes and reappears. Later Justin comes across a man in a tent who is caught in a loop where he bloodily bashes his head into the wall before everything repeats itself over.

In another eerie scene, Aaron walks away from the camp, passes one of the markers, is followed by Callie Hernandez who walks up to where he is standing but can no longer see him or he her as both look out unaware of the other standing only a couple of feet away. Aaron comes across a caravan and finds a film projector playing recent scenes of him onto a sheet on the clothesline. He leaves only for an invisible force to abruptly toss the projector over the side of the cliff and halfway across the vast plain below. The film settles for an upbeat resolution but becomes far more uncanny in its low key way than major studio productions do with ten times the budget.