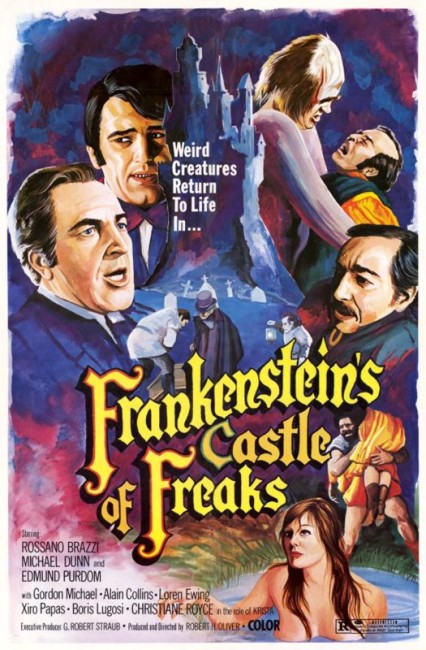 Count Frankenstein has taken the body of a Neanderthal killed by a mob of villagers and is trying to revive it in his laboratory. However, Frankenstein’s grave robbing activities have attracted the attention of the local inspector. Suspicion falls on Frankenstein after the footprint of his dwarf servant Genz is discovered near a disturbed grave. Meanwhile, Frankenstein’s daughter Maria returns from university with her friend Krista. Frankenstein is attracted to Krista after he finds she has an interest in the same fields he does. The depraved Genz is driven out of by Frankenstein and falls in with another caveman that he names Ook. Together the two of the abduct women from the village and take them to their cave.

This is a film that feels as though it has been put together to exploit a fad rather than with any script. While Frankenstein engages in a series of experiments, the film seems to have taken what he does so much for granted that there is no actual scene where he revives his creation from the dead. And while we do get grave robbing scenes, there are no scenes with Frankenstein making a patchwork creation as he does in almost any other Frankenstein film. This also must be a first for a Frankenstein film in which the monster is a Neanderthal that lives in a nearby caves and is resurrected after being killed by a mob of villagers. All of this is interspersed with numerous interludes where the various girls of the show are seen in a state of undress.

Much of the show is slow. A lot of it is taken up by Rosanno Brazzi’s Frankenstein wooing his daughter’s fiend Christiane Royce and seeing her as someone like-minded. Another quite substantial section of the film is taken up by the dwarf Michael Dunn who is booted out of the castle and befriends a caveman, which he names Ook (the entertainingly named Boris Lugosi) and the two begin abducting girls – the scenes with Lugosi menacing captives leaves the film resembling something of the bad movie caveman classic Eegah (1962). There is a reasonable amount of time given over to the servants who appear to have been cast with evident non-native English speakers.

The cast includes Italian actor Rossano Brazzi, known for numerous parts in Italian and English-language films ranging from The Barefoot Contessa (1954) to The Italian Job (1969) and The Final Conflict (1981), as Frankenstein; dwarf actor Michael Dunn who had appeared as Miguel Loveless in tv’s The Wild, Wild West (1965-9) and films such as Murders in the Rue Morgue (1971) and The Mutations (1974) who actually died before the film was released; British actor Edmund Purdom who appeared in a lot of continental B exploitation fare from the 1970s to the 1990s and even directed the slasher film Don’t Open Till Christmas (1984) as the police inspector; and Gordon Mitchell, an American bodybuilder who had appeared as Hercules and Maciste in various of the Italian peplum films of the 1960s.