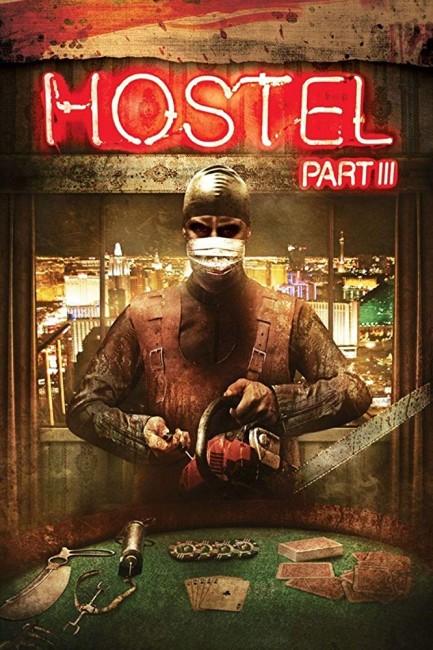 Scott and three of his best friends Carter, Justin and Mike head to Las Vegas for Scott’s bachelor party, although Carter tells Scott’s fiancee Amy that they are only going to Palm Springs. After arriving at the casino, they meet two girls, Nikki and Kendra, who invite them to a party off The Strip that promises ‘something a little different’. When they arrive at the remote warehouse, this turns out to be a set-up for the bachelor party. In the morning, they find that Mike has gone missing. He and Nikki have been abducted and are taken by the Elite Hunting Club to be tortured in front of an audience. In trying to find what happened to them, the others are also captured by EHC and made prisoners to be tortured and killed.

This is the third of the films that began with Eli Roth’s Hostel (2005). In Hostel, Roth pushed on-screen torture and dismemberment to a new extreme – in so doing, creating a fad that was soon nicknamed Torture Porn and copied by other horror films. Eli Roth followed Hostel with a less well received sequel Hostel Part II (2007). For a number of years, Roth flip-flopped over whether he would or would not direct a Hostel Part III, before eventually turning the directorial reins over to Scott Spiegel who had acted as producer on the previous two Hostel films. Unlike the other two Hostel films, Hostel Part III was released directly to dvd and cable.

Scott Spiegel is a long-time Sam Raimi associate, having made minor acting appearances in almost every film Raimi has made to date, including written the script for Raimi’s The Evil Dead II (1987). Raimi even made a small acting appearance in Scott Spiegel’s feature-length directorial debut, the supermarket slasher film Intruder (1989). Subsequently, Spiegel became a minor genre director with the likes of From Dusk Till Dawn 2: Texas Blood Money (1999) and My Name is Modesty: A Modesty Blaise Adventure (2002), before producing the Hostel series and other Eli Roth overseen films such as 2001 Maniacs (2005). Spiegel has also written and produced Thou Shalt Not Kill … Except/Stryker’s War (1987) about a murderous religious cult and written the non-genre The Rookie (1990).

As a director, Scott Spiegel’s work is undercut by a constant series of pretensions – most notably his insistence on ridiculous closeups or shots from inside different objects. Spiegel is up to his usual tricks in Hostel Part III. There are all the absurd shots from inside objects – everything from looking out of a blender, from inside the surgeon’s bag, from behind the mask put onto Skyler Stone’s face and out of Evelina Oboza’s mouth as bugs are poured in.

Spiegel also adds a new trick to the mix – that of creating constantly contrived pull-the-rug-out twists on the audience. There is a prologue set up for the express purpose of jolting audience expectation – an average-looking nebbish nerd (Chris Coy) enters a room in a hostel, finding that it is double-booked and that he is sharing with a Ukrainian (Nickola Shreli) and his girlfriend (Evelina Oboza). He cautiously befriends them and offers them some beer, where we are waiting for something nasty to happen to him before the Ukrainian girl collapses in the bathroom followed by the guy as he goes to help and we find that it is Coy who is part of the set-up not the Ukrainians. This seems a ridiculously contrived set-up created for the sole purpose of reversing our expectations about unwitting Western tourists being taken advantage of by local people in hostels in the former Russian republics.

A few minutes later the film then does exactly the same kind of contrived set-up – the four guys meet two hot girls in a casino who persuade them to come to a warehouse off the beaten track for something different. As soon as they enter, the others go missing before Brian Hallisay is grabbed, hooded, thrown into a chair and dragged into a room – only to find that everything has been an elaborate charade just to get him to a bachelor party.

By this point – some twenty minutes into the film – I was starting to get annoyed by these constant contrived tweakings with our expectation. When logically considered, none of these set-ups holds any purpose other than being there to jerk with what the audience expect as a result of the other two Hostel films. There is also the ridiculous mid-film twist where [PLOT SPOILERS] it is revealed that everything has been set up so that one member of the party can have the unusual thrill of killing his friends – why this seems to involve a fake bachelor party, one of the friends being abducted and then the other three friends being led on a trail to find him, including the guy who has set everything up pretending to not know what is going on, seems ridiculously complicated when elsewhere the US branch of EHC seems happy to simply just abduct people from their hotel rooms. There is also a lame double twist ending.

Scott Spiegel does unevenly when it comes to the Torture Porn scenes that are now de rigeur for the series. There is an extremely nasty scene where a demented surgeon has Skyler Stone imprisoned in a chair and then slices off his face. This works well and is far more gutsy and nasty in impact than anything that Eli Roth threw at the audience in Hostel Part II. However, Scott Spiegel then promptly blows it in the next silly torture set-piece where he has Evelina Oboza merely being covered in bugs. The rest of the random deaths throughout disappear into standard B-movie forgettability.

Certainly, Hostel Part III does attempt to add some new ideas into the mix – the interesting idea of the tortures now being performed as a form of theatre where bored paying audiences can bet on the outcome and responses of the victims. Unfortunately, in having now been relocated from Eastern Europe to the USA, the premise loses credibility. It is far scarier and more eminently plausible that tourists could disappear and end up in snuff-for-pay torture chambers in former Soviet republics, whereas relocated to Las Vegas you cannot help but think with the prevalence of security cameras, a highly organised and efficient police force, it would be extremely difficult to get away with nobody noticing people regularly going missing, let alone being abducted right out on the street as we see at one point.