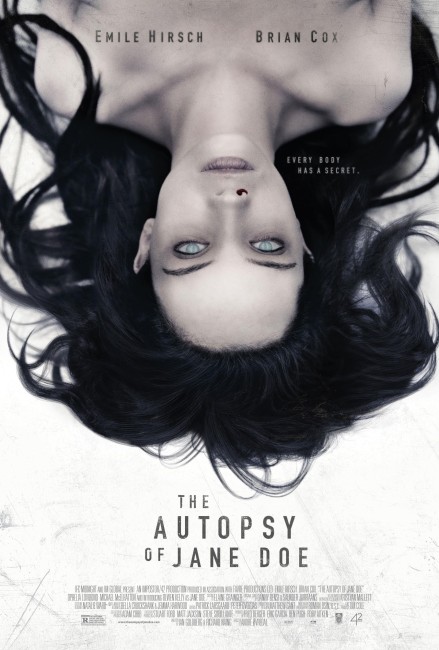 In the small town of Grantham, Virginia, police find three murdered bodies in a house, along with the unidentified corpse of a woman half-buried in the cellar. The body of the Jane Doe is taken to the morgue/funeral parlour run by coroner Tommy Tilden and his son Austin. The two of them pull an overnight stint in order to find the cause of death. As they set to work, they find many strange things about the corpse – badly burned lungs but no burn marks on the outside of the body; occult symbols embedded in the skin. Even as the body of the Jane Doe lies dead on the morgue slab, it begins to have an unsettling effect all around them, causing the power to go on and off, creating hallucinations and playing with their minds.

Norwegian director Andre Øvredal made an appearance almost out of nowhere with his second film The Troll Hunter (2010), a Found Footage film made with a quirkily eccentric sense of humour that turned it into a word of mouth hit. Øvredal had earlier made Future Murder (2000), although hardly anybody appears to have seen this.

The Autopsy of Jane Doe was Andre Øvredal’s third feature-length film and his first made in the English language. Øvredal took his time making a successor to The Troll Hunter – he states that he was determined to make a horror film but crucially wanted to find the right script. Despite its rural American setting and characters, the film was shot in England with British financing and featuring an all-British cast (with the exception of Emile Hirsch).

I became absorbed with The Autopsy of Jane Doe as it started. Øvredal draws us in to a mystery about the nature of the corpse, something that only proceeds to become more bizarre. Much of the film consists of us watching a nude Olwen Kelly in progressive stages of dismemberment – everything from having her thorax cut open and torn back to her skin peeled off and head opened up. At the same time, the mystery about who and what she is – the marks left by the bindings around her hands; the piece of cloth placed in her throat; the burned lungs but unaffected outer body; the weird occult symbols on the inside of her skin – becomes intensely fascinating.

Less interesting to me was when the film moved out of being an autopsy table mystery and into being a regular haunting. There are a number of spooky elements that play out in the background – the songs that keep coming on the radio, the storm brooding outside, the electricity going on and off. At about the halfway point, the film moves from being a forensic mystery to a standard spook show and by doing so ends up losing interest. These scenes are familiar territory for any ghost story film that has come out in the last decade and not nearly as interesting as the way the film starts in.

Øvredal does create at least one effective jump not dissimilar to the big shock in The Descent (2005). [PLOT SPOILERS] Brian Cox and Emile Hirsch are cowering in the elevator from what they believe to be the witch coming after them and Cox attacks it with an axe – only to discover he has instead hit Ophelia Lovibond.

Andre Øvredal next went on to make the Guillermo Del Toro scripted/produced Scary Stories to Tell in the Dark (2019) and the Norwegian mythological fantasy Mortal (2020), as well as produced the horror film Umma (2022).