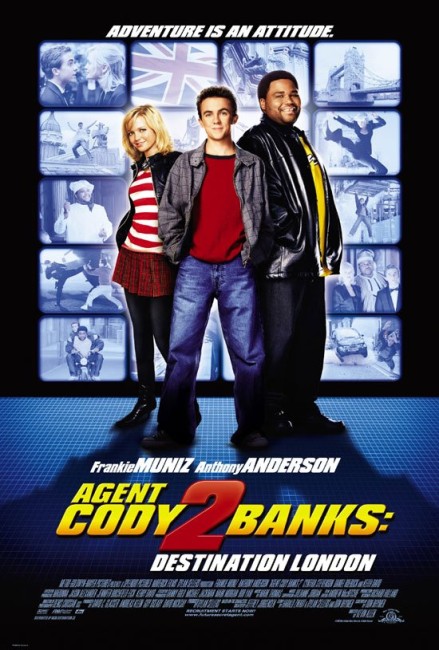 Junior CIA agent Cody Banks learns that his spy summer camp counsellor Victor Diaz has absconded with the prototype of a top-secret mind control device. Cody is quickly given a cover as clarinettist with a youth orchestra that is to play in Buckingham Palace and sent to London. He is paired with Derek Bowman, a loud, obnoxious agent who has been demoted. Cody goes to stay at the country manor of Lord Duncan Kenworth who is sponsoring the orchestra. There Cody and Derek must stop Kenworth as he plans to activate the device and take control of the minds of world leaders during a meeting at Buckingham Palace.

Agent Cody Banks (2003) was a juvenile variant on the fad for spy spoofs that had been kicked off by the cult success of Austin Powers, International Man of Mystery (1997). Agent Cody Banks was never anything more than a banal children’s film, although it did have a gem of a good idea at the heart of it – the idea of a teenage spy who is outfitted with all the gadgets, which he promptly deploys for cool purposes, but proves totally ill-at-ease with girls when it comes to the playboy super-spy image. Agent Cody 2 Banks: Destination London [that’s the order the title is written on the opening credits and poster, although not the end credits] is a sequel.

Alas Destination London is an effort that rapidly wears out the exceedingly slender likeability that the original had. Indeed, while the first film spoofed the spy image, Destination London plays the central concept straight. There is no parody of the spy image in seeing it played out in a high school setting, no comedy centred around the contrast between James Bond’s super-stud image and Cody’s ineptitude with girls. At most, Destination London has a joke centred around Cody’s having to pose as a clarinettist without knowing how to play the instrument. Bookended at the beginning and end is a repeat of the gag that comes about his parents remaining unaware of his mission as an agent. On the other hand, Destination London blows up the action sequences, an element that was relatively low-key in the original. However, in being required to play the spy role straight (or at least without conscious parody), the diminutive Frankie Muniz just seems geeky and decidedly unheroic.

Moreover, the action scenes are all played as comedy. What drags Agent Cody 2 Banks: Destination London down in a big way is how the slim plot is given over to noisy chaos. Director Kevin Allen plays the comedy without any sophistication – food fights, comedic stumblings around with various people turned into mind-controlled zombies, an overblown opening sequence where the camp is accidentally destroyed and so on. The silliness is amplified tenfold whenever the annoyingly girly-voiced Anthony Anderson appears on screen – demolishing kitchens (a scene that gets played out twice) and running about the streets on a moped.

Most of the supporting characters are allowed their heads in shamelessly over-the-top performances – Anthony Anderson, James Faulkner’s villain, David Kelly as a geriatric butler, and especially Paul Kaye as an extremely weird Q character. (At least, British pop singer Hannah Spearitt plays the female lead with an appealing perkiness).

The villain’s world domination plan is incredibly sketchy – at no point do we learn why he is trying to control the minds of world leaders – indeed, one kept wondering why, when the CIA find it so easy to infiltrate his mansion, they needed to send a kid rather than an adult spy to do the job.

Agent Cody 2 Banks: Destination London‘s principal novelty is the London location – perhaps reflective of the newfound cool that England and Tony Blair found in America after becoming its primary ally in the Iraq war. (The film’s cutest gag is a climactic scene, which has a mind-controlled Tony Blair-lookalike and the Queen boogieing along as a German-accented kid sings, with possibly subversive intent, “War! What is it good for?”). British reviewers reacted and poured scorn on the film for its cliché presentations of the country – London is only used as a picture postcard location and at no point does the film engage in any of the rich possibilities for culture clash comedy. Surprisingly though, Destination London was directed by an Englishman – sometimes actor Kevin Allen, director of Twin Town (1997) and The Big Tease (1999).

Unlike Spy Kids (2001), the Agent Cody Banks series’ obvious source of inspiration, Destination London leaves one feeling dismal at the prospect of any further entries to the series. This is well and truly a series that has squeezed all of the exceedingly few charms out of its premise.