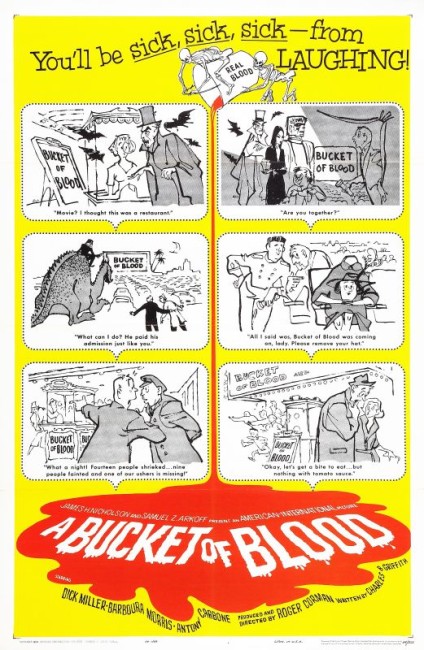 Walter Paisley is a busboy at the trendy art-house cafe The Yellow Room. Walter is desperate for social acceptance by the Beatniks he tends and unsuccessfully tries his hand at sculpting. He accidentally stabs his landlady’s cat and then on inspiration encases it in plaster. He exhibits this as a sculpting and finally achieves recognition from those around him. Next, Walter is forced to kill a cop who tries to arrest him. Using the cop’s body and others that he kills, he encases these in plaster and receives even greater accolades.

A Bucket of Blood is one of the legendary no-budget quickies from director/producer Roger Corman. Corman began directing in the 1950s, churning out cheerfully entertaining titles like Day the World Ended (1955), (1955), It Conquered the World (1956), Attack of the Crab Monsters (1957), She Gods of the Shark Reef (1958) and Teenage Caveman (1958). Into the 1960s, Corman became more critically accepted with his series of Edgar Allan Poe adaptations starring Vincent Price beginning with The House of Usher (1960).

Towards the end of the 1950s, Corman and regular writer Charles B. Griffith began taking their work less seriously and in films like A Bucket of Blood, Creature from the Haunted Sea (1961) and especially The Little Shop of Horrors (1960), a wacky sense of humour started to come into play. These films often have a droll sense of humour that comes couched so dryly by Corman and Griffith that is went over the heads of most audiences of the day and it took rediscovery by audiences in later decades for the films to be truly appreciated.

A Bucket of Blood was made on one of Roger Corman’s usual shoestring budgets and naturally shot in five days. The film has only a 65-minute running time. It was a precursor to Corman’s no-budget black comedic mini-gem The Little Shop of Horrors, which was also written by Charles B. Griffith and featured Dick Miller. Here Charles B. Griffith revamps and gives a satiric contemporary spin to the classic Grand Guignol horror film Mystery of the Wax Museum (1933), which featured Lionel Atwill as a mad wax museum curator encasing dead bodies in wax.

Mystery of the Wax Museum had been remade a few years earlier in 3-D as the highly successful vehicle House of Wax (1953) with Vincent Price (who would become Roger Corman’s principal leading man the following year). There were several other efforts that borrowed the same notion of artists using real bodies in their work, including Herschell Gordon Lewis’s Color Me Blood Red (1965), Blood Bath (1966), Nightmare in Wax (1969), Sadisterotica (1969), Cauldron of Blood (1971), Crucible of Terror (1971) and Eddie the Sleepwalking Cannibal (2012).

Corman and Charles B. Griffith’s interpretation of the idea is as a gleeful black comedy that happily jibes at the pretensions of the Beat Generation. The idea is amusing, although the script is told with a minimalist economy that brings a smile rather than a genuine laugh. As yet, Corman and Griffith have not taken the idea to the level of Little Shop of peopling the film with a cast of deadpan eccentric characters and most of the show is played straight. It tends to be more frenetic running around than it does laugh-out-loud gags. It is a cute idea, although essentially only a one-gag film – however, the brief running time means that the film never wears out its welcome. Dick Miller plays with likeably nebbish lunacy. He is like a little boy that you cannot help but dislike, even when he is killing people.

Dick Miller and the character he plays have become a running in-joke in the genre parodies of the 1980s, particularly the films of Joe Dante, with Miller usually always playing someone named Walter Paisley. Direct appearances of Miller as Walter Paisley include The Howling (1981), Twilight Zone – The Movie (1983), Chopping Mall (1986), Night of the Creeps (1986) and Shake, Rattle and Rock (1994).

The film was later remade as A Bucket of Blood/The Death Artist (1995), one of the cable tv movies presented under the umbrella title Roger Corman Presents, starring Anthony Michael Hall in the role of Walter Paisley. In the same way that The Little Shop of Horrors was successfully revived on stage as a musical, this film was later revived in musical form as A Bucket of Blood (2009).