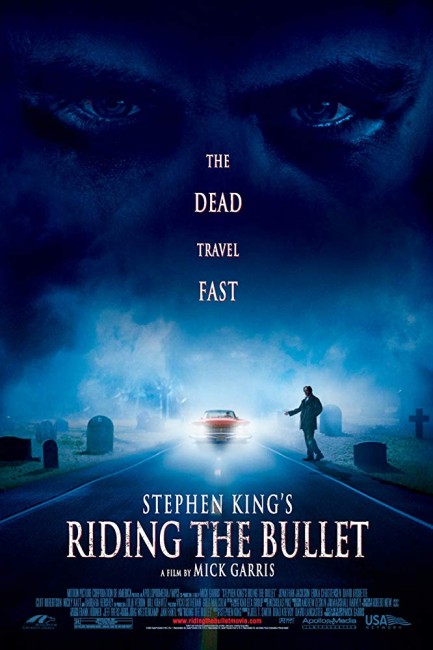 1969. On his birthday, Alan Parker’s girlfriend Jessica announces that she is going to split up with him. Alan decides to end his life by slashing his wrists in the bath – only for Jessica burst in with his friends revealing that it was all a set-up for a surprise birthday party. Afterwards, Alan learns that his mother has been taken to hospital with a stroke. Fearful that his mother is dying, he decides to hitchhike to Lewiston to be with her. After several rides, Alan is picked up by George Staub, only to realise that George is someone who is dead. As they drive towards Lewiston at high speed, George offers Alan a choice between whether he or his mother will die that night.

Mick Garris is a regular genre filmmaker whose works I always dread having to watch. Mick Garris comes fairly close to being one of the worst directors currently working in genre cinema. Garris started out in the industry as a receptionist at The Star Wars Corporation, gained a foothold on the other side of the camera directing various Making Of documentaries for films like The Fog (1980), The Howling (1981), The Thing (1982), Gremlins (1984) and The Goonies (1985), and then wrote/produced Coming Soon (1982), the film that began the fad of compiling B sf/horror movie trailers, before netting a position as script editor on Steven Spielberg’s anthology tv series Amazing Stories (1985-7). Garris then wrote a handful of scripts with Batteries Not Included (1987), The Fly II (1989) and Hocus Pocus (1993) and made his directorial debut with Critters 2 (1988) and went onto the cable tv movie Psycho IV: The Beginning (1990), plus two episodes of the horror anthology Nightmare Cinema (2018).

Mick Garris and Stephen King are clearly good friends and Garris has become the most popular interpreter of King’s works on screen to date. Now, I happen to think that Stephen King is a great writer. He has an instinctive understanding of the horror genre and has written an excellent book on the subject, Danse Macabre (1981), that should be a textbook in the library of anyone writing critically about horror. I do hate to burst the bubble of the friendship that King has with Mick Garris – but Stephen, Mick is the single worst director that has ever been attached to any adaptation of your work. It is not that Mick Garris has bungled one of your works – it’s that he has proven himself entirely ham-fisted with every single one that he has touched. (Well okay, The Shining and Desperation emerged not too badly). I don’t know why you seem unable to see this Stephen; I don’t know why your astute insight into horror suddenly seems to have deserted you when it comes to seeing that good works are not being produced here. Once you could understand, even twice – but seven times!!!! I can only assume that it is the blindness of friendship that allows you to keep letting the near-inept Garris touch your works.

I have not read Stephen King’s original Riding the Bullet (2000) novella. This had the novelty of being published as a work that could be downloaded free from the internet. You can see from the film how the original story would have gone – young man hitchhikes home and gets a ride with someone who is dead who then asks him to make a choice between his own or his mother’s life. It would have been a perfect story to be adapted as a half-hour episode of The Twilight Zone (1959-64) or one of the various anthology series. Riding the Bullet is a story that could have worked well with a director who is capable of some subtlety. There are even times where the distinctive voice of Stephen King shines through – the sense of prescience as Joshua Jackson feels a wrongness about the dying Cliff Richardson or just ‘knows’ that Alexis Arquette is dead. It is just that in the hands of Mick Garris, the rest of Riding the Bullet collapses into the completely ludicrous.

Mick Garris is a director who knows no concept of subtlety. His direction of horror is like a carnival haunted house ride that consists of having things pop into the camera – corpses reaching up to grab Joshua Jackson everywhere; dreams of his mother squawking at him or walking down the road pushing an IV stand; Jackson’s ghost double spouting one-liners; a crow that screeches “What the fuck you looking at?” before getting creamed by a truck; the Grim Reaper popping up on the back of a rollercoaster ride to throw the young Jackson out during a flashback; coyotes ripping out the throats of carrion; David Arquette showing his exposed brain; a severed head talking in the backseat of the car; the ghost of Jackson’s father blowing his head off with a shotgun; the climactic trip through the fairground with the ghosts of everyone popping up; even a zombie that leers “They’re coming to get you, Barbara,” the classic line from Night of the Living Dead (1968).

These pop-up effects and flash fantasies occur with such regularity that they become intensely irritating through Mick Garris’s constant, almost manic, need to keep trying to scare people. Contrarily though, Garris so overdoes the effect that there is not a single moment in the entirety of Riding the Bullet that in any way surprises or scares you. Yet, had all this been tossed out and we just had a film about a man suddenly coming to understand that the person driving a car is dead, we might have had something that could have been quite spooky in the right hands.

In fact, Riding the Bullet collapses into the staggeringly ridiculous within the very opening scenes where we go from Joshua Jackson breaking up with girlfriend Erika Christensen and spookily walking through a ghost double of himself and then going home to slash his wrists in the bathtub, only to have Erika Christensen burst in with his friends for a surprise birthday party (as though letting your boyfriend think you are splitting up with him is the most natural way in the world to spring a surprise party). The scene turns completely absurd with Mick Garris throwing in a Grim Reaper who comes and sits on the bathtub and lights up a joint, while the faces on the wallpaper starting talking, before Joshua Jackson wakes up in a hospital bed to the laughable sight of Erika Christensen with a pair of angel wings.

Mick Garris appear to have no concept of allowing his actors to carry the story. Everything is up there on screen and underlined with exclamation marks in big marker pens just to make sure that there is nobody in the audience who does not understand that they are being required to jump on queue Now!!! Being a director only capable of telling a story in terms of carnivalesque pop-up effects, Mick Garris has no idea of what to do when it comes to a more subtle moments that requires he convey the characters’ inner turmoil and so has to resort to absurd flash fantasy tactics like Joshua Jackson imagining getting phone calls from his girlfriend wanting him back, or the camera moving from an image of his mother’s coffin to Jackson’s own where the tombstone has the legend “Who Gives a Shit”. Rather than depict Joshua Jackson’s anxiety about going up to the hospital room to meet his mother, Mick Garris gives us ridiculous flash fantasies of the doctors giving alternate diagnoses and the mother accusing “I know what you did” as Jackson waits at the hospital reception for the nurse to make a call.

All of these are scenes that could have been conducted with infinitely more subtlety with a few more lines of dialogue and had Mick Garris simply sat back and allowed his actors to suggest things. Equally, issues that should have hung over the film – does Joshua Jackson feel any guilt about having traded his mother’s life for his own at the end? – are nowhere to be found. Mick Garris is a director who has taken the work of an author who has a superb sense of character and inner voice and reduced it to an entirely laughable show of pop-up effects, ones that completely erode any sense of drama, atmosphere, subtlety; in fact, erodes everything except the constant, irritatingly insistent need to get in an audience’s face. It takes an extraordinary ineptitude to be able to mangle a film in this way.