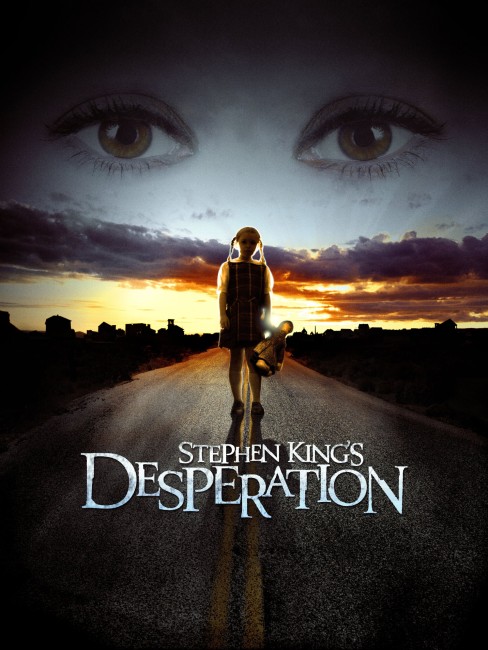 Husband and wife Peter and Mary Jackson are driving through Nevada when they are pulled over by Collie Entragian, the sheriff of the nearby town of Desperation. Entragian’s issuing them with a routine citation for a broken headlight abruptly changes when he finds a bag of marijuana that has been left in the trunk by Mary’s sister. Entragian arrests and takes both of them into Desperation, during which it becomes increasingly apparent that he is dangerously crazy. Entragian then shoots Peter and throws Mary in the cells with several other townspeople. Next to be arrested by Entragian is famous writer John Edward Marinville who is travelling cross-country by motorcycle on a signing tour. Marinville’s support man Steve Ames is driving several miles behind with Cynthia Smith, a hitchhiker he has picked up. Ames gets a garbled cellphone call for help from Marinville and they enter Desperation in search of what has happened, finding the populace lying dead in the streets. In the cells, young David Carver believes he is led by God and follows divine guidance to help the group escape. They gradually realize that the re-opening of the town’s old China Pit mine has unleashed a supernatural force. Tak, the creature from the mine, has the ability to possess human bodies and has taken over Entragian. However, the bodies that Tak inhabits soon wear out and it now takes over David’s mother. Guided by David’s visions, the group seek to find a means to stopping Tak by destroying the dimensional gateway at the bottom of the mine.

During the 1990s/early 00s, the Stephen King tv mini-series became an industry unto itself. We have seen a number of successes amongst these, including It (1990), Golden Years (1991), The Tommyknockers (1993), The Stand (1994), The Langoliers (1995), Storm of the Century (1999), Firestarter Rekindled (2002), Rose Red (2002), Kingdom Hospital (2004), Nightmares & Dreamscapes: From the Stories of Stephen King (2006) and the remakes of The Shining (1997), Carrie (2002) and ‘Salem’s Lot (2004). The tv mini-series is an arena that seems particularly suited to Stephen King’s works, giving a naturally wider scope to his 800-1000 page + books that is not always available to film – notedly well over half of the feature-film length adaptations of King’s works that have made during this same equivalent period have been taken from his novellas and short stories as opposed to novels.

Unfortunately, one of Stephen King’s worst collaborators has been director Mick Garris. Garris had made more Stephen King adaptations than any other individual, beginning with the awful Sleepwalkers (1992) and continuing through The Stand, The Shining, the tv movie Quicksilver Highway (1997), the film Riding the Bullet (2004), Desperation here, and the subsequent Bag of Bones (2011). It is disappointing that King and Mick Garris’s apparent friendship has not remained just that, that it has instead combined to produce so many adaptations as Garris’s directorial hand tends to the clod-fisted. The worst offenders have been Sleepwalkers and Riding the Bullet and to a lesser extent The Stand. In these, Garris’s characters are one-dimensional verging on cartoonish caricatures. He seems to know no concept of subtlety and likes to batter audiences over the head until even the most severely intellectually handicapped understand the points he is trying to make. The films disappear beneath a constant profusion of pop-up effects – Garris seems not unlike a person who keeps jumping up in your face shouting “boo”, not realizing that while such may hold effect once that keeping doing so every five minutes becomes wearyingly annoying.

Garris did get it together for the adaptation of The Shining (which also starred Steven Weber). Though that mini-series was not entirely free of Garris’s constant lunge-at-the-camera pop-up effects, Garris did transcend his usual schlock preponderances and created a fair degree of looming menace and psychological subtlety. The extremely good news about Desperation is that it is Mick Garris back in The Shining mode rather than either Sleepwalkers or Riding the Bullet. There are a smattering of pop-up effects, particularly during the latter half – images of snakes and spiders crawling over corpses; Tom Skerritt having Vietnam flashbacks with a pop-up Tak; and the especially absurd and schlocky image of someone going to use a coin soda machine that spurts blood out at them – but considerably less than usual. Garris even shows off at one point, staging a flashback to the story of what originally happened at the mine in the style of a silent movie.

I thought Desperation (1996) was one of Stephen King’s more routine novels. The story (and the mini-series, which follows the book extremely closely) starts extremely well with the strong and menacing character of the psychotic sheriff Collie Entragian arresting and brutalizing innocent passers-by. (You are almost certain that King must have been inspired by some negative experience he had had with law enforcement officials in real life). The character of Entragian carried the story with an enormous drive. Alas, by about the halfway point, Entragian was sidelined for no particularly good reason and the story became a far less interesting one about the party of survivors being hunted as Tak passes between bodies and then the climactic venture down into the mine to destroy it.

Part of the problem one suspects is that Stephan King is a writer who writes his books as he goes along. A writer’s workshop I once attended offered a great analogy for the two differing approaches taken to writing a book – the fanatical pre-planner who is akin to someone trying to peg down every rope of a tent (examples might include Thomas Harris, Annie Proulx and J.R.R. Tolkien) vs those who approach writing akin to knitting a scarf where the writer has a general idea of what they are creating in mind but it only takes shape as they go along and the story gains greater coherence in the rewrites but may be somewhat structurally unsound (examples might include Terry Pratchett, Dean R. Koontz and Ian Watson). I suspect that Stephen King is a writer who belongs to the latter category.

Not unexpectedly, Desperation the mini-series works in exactly the same places and has the same structural problems that the book did. Mick Garris does particularly well in the first half. He does a fine job of setting the scene – from the opening image of a dead cat nailed to the signpost along the highway to the entry into Desperation where the streets are littered with scores of dead bodies. Genre regular Ron Perlman gives a fine performance in the part of Entragian (even if the 6’1″ Perlman is not quite the giant of a man that Stephen King describes Entragian as being in the book).

Garris and Perlman, aided by the King penned script, nail perfectly the sense of looming threat and of the everyday world abruptly turned upside down. Like all good horror stories, there is an out-of-the-blue element where Ron Perlman initially pulls up Henry Thomas and Annabeth Gish and a broken taillight abruptly morphs into the nightmare of a found bag of marijuana. As they are arrested, things become increasingly more surreal with Perlman suddenly spitting out lines like “I am going to kill you” in the middle of reading them their Miranda Rights, before continuing on as though he had said nothing. Things are jolted even further by the abrupt and unexpected shooting of Henry Thomas inside the entrance of the police station – any horror story that kills off a recognizable star name within the first few minutes presages well, giving what is to follow a sense of unease where standard guarantees have been shot out.

The story’s mid-change switch of tracks is even more obvious in the mini-series where Entragian and Ron Perlman simply vanish without any explanation. A possessed Sylvia Kelegian is brought in but never gets to do much. More importantly, it is never explained what happened to Entragian, leaving a vast exposition hole in the story, which is something a story like this needs in a big way when you create a character with such a darkly captivating presence. Even a shot depicting his dead body, or showing Tak transferring between Entragian and Mrs Carver would have helped to no end.

Sometimes there is an odd Baptist morality that informs Stephen King’s works (King’s daughter is even a Unitarian minister). This is most evident in The Stand (1978) where people end up in two camps caught between good, decent ordinary folk led by a woman who receives visions from God and those on the side of evil who are led by a figure who may be the Devil. Similarly, The Green Mile (1996) was a work about a man being cruelly punished by the Almighty for allowing a miracle worker to be killed. Elsewhere, works like Needful Things (1992) and Storm of the Century feature typical American small towns visited by The Devil who stirs up their petty hypocrisies and guilts.

One of the surprising elements about Desperation is how religious a work it becomes once the character of Collie Entragian is moved off centre stage. In this second half, the character of young David Carver comes to the fore – who King has as a believer in miracles and able to divine God’s purpose to lead the party in the fight to stop Tak. What surprises is first of all how such an overtly religious work ended up in public broadcast television and second what an Old Testament outlook it is that Stephen King takes – one dealing with believers having to make vast sacrifices in furtherance of God’s work. We even get a replay of the Miracle of the Loaves and Fishes with a bag of canned sardines.