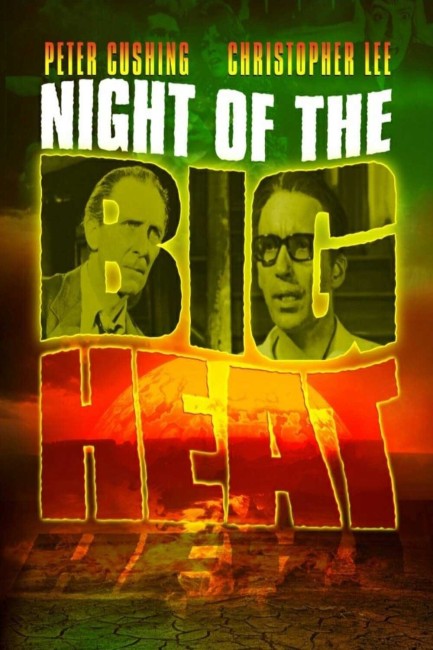 The island of Fara is subject to a 90-degree heatwave and rising. Communications are affected and then locals start being killed by mysterious bright lights. Visiting scientist Godfrey Hanson determines that Fara is being used as a beachhead for an invasion by aliens that have body temperatures far higher than any heat produced on Earth.

Terence Fisher had been at the forefront Hammer Films’ emergence as the top horror filmmaking company in the world in the late 1950s. He directed their two most influential works, The Curse of Frankenstein (1957) and Dracula/The Horror of Dracula (1958), and numerous other of their classic works (see below). In the mid-60s, Fisher briefly left Hammer over creative differences and went to work at other studios where he turned out a loose trilogy of science-fiction films of which Night of the Big Heat was the third. The other two are The Earth Dies Screaming (1964) and Island of Terror (1966).

Each of Terence Fisher’s science-fiction films centres around a small group of people, gathered in an isolated locale having to fend off an alien invasion. All of these films are nondescript. Terence Fisher, whose exemplary work for Hammer had earned him a cult reputation, failed to translate the vividity and floridness of his Gothic period work into a contemporary locale. He simply fails to conjure the necessary paranoid atmosphere that alien invasion films require – these films feel as though Fisher had little interest in making them. The same is the case with the sf films that Fisher mad for Hammer – Four Sided Triangle (1953) and Spaceways (1953).

The scenes of people being attacked by bright lights here are not terribly threatening and when the aliens are finally revealed they seem too ridiculous and slow moving to be of menace to anybody. The science is nonsense – Christopher Lee talks about aliens having higher body temperatures than anything that can be produced on Earth, which would mean that they would have to be producing heat on the order of nuclear explosions.

Oddly enough, it is the people in the film that are more interesting than the alien menace. Christopher Lee gives a typical but effectively haughty and arrogant performance. Peter Cushing has a minor role as the island’s doctor. The most interesting is the Angela character (played by Jane Merrow) who minces through the film with a series of heated seductions and tauntings, her wanton sexuality making an interesting symbolic counterpoint to the ‘heat’ being provided from without by the aliens.