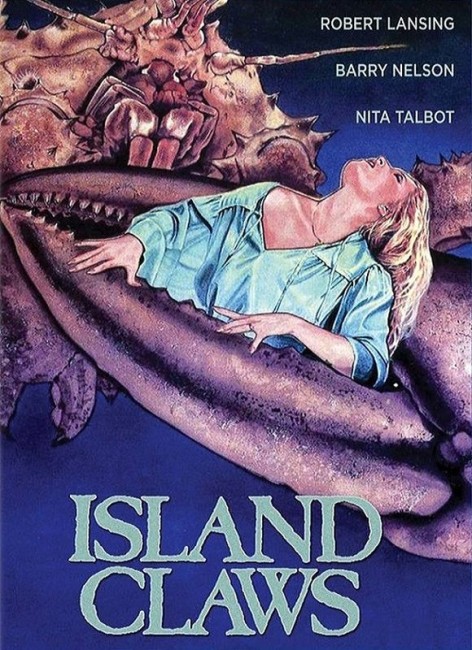 Photojournalist Jan Raines goes to write an article on the research into crabs being conducted under Dr John McNeal at the National Marine Biology Institute in the Florida Keys. There McNeal’s assistant Pete Adams asks her out. The orphaned Pete was raised by the island’s bar owner Moody. Moody is suspicious of Jan because her father Frank is the owner of the nearby nuclear power plant that has just had a big spill. Jan’s father was also an old friend of Moody and what Moody is not telling Pete is that Frank caused the death of his parents while driving drunk. Crabs everywhere now begin to attack and kill people. As many of the locals blame this on a boatload of illegal arrivals from Haiti, a giant-sized crab emerges and causes havoc.

Island Claws was the only film ever directed by Hernan Cardenas who has since vanished into the equal obscurity from which he emerged. The film received negligible distribution when it came out but turned up in the VHS era. It is however co-written by Rico Browning, the professional diver best known for playing The Creature from the Black Lagoon (1954).

Island Claws is a throwback to a certain type of 1950s monster movie – namely the giant creature film that began with Them! (1954). It is reminiscent of other films of the era like Tarantula (1955), Beginning of the End (1957), The Black Scorpion (1957), The Deadly Mantis (1957), Monster from Green Hell (1957), The Monster That Challenged the World (1957), Earth vs the Spider (1958), Attack of the Giant Leeches (1959), The Giant Gila Monster (1959) and in particular Attack of the Crab Monsters (1957). It even appropriates the suggestion of the cause of the giant crabs being due to radiation that almost every 50s giant monster film used with scenes of a spill from a nuclear power plant playing out in the background. (These explanations also vie with more modern ones that suggest the crabs are being caused by genetic tinkering going on at the film’s marine lab).

For most of the running time, there is nothing you can particularly fault about Island Claws. It seems competently made, the actors seem reasonable in their roles. There are none of the usual technical gaffes, pieces of bad acting or bad moviemaking that people love to descend on in celebrating a film’s bad movie status. Unlike Night of the Lepus (1972), a similar film of the era that you could compare this to, the bulk of the show is made using regular sized crabs and there are some reasonably effective scenes with them attacking people. These scenes at least suggest that Island Claws is not going to be hailed as a lost classic but at least a passably competent one. It even has an attitude towards illegal immigrants to the US that is jaw-droppingly nonchalant and accepting in this era of Build The Wall madness.

On the other hand, there are the climactic scenes where Island Claws becomes exactly the bad B movie that everything else about it up to that point had avoided. There’s the wonderfully absurd moment where Steve Hanks and Jo McDonnell are inside a house and a giant claw smashes through the walls and roof and tears the house apart. This is followed by an entertainingly absurd scene where most of the cast fight against a giant crab that is about the size of a truck as they struggle to inject it with the formula that will kill it.