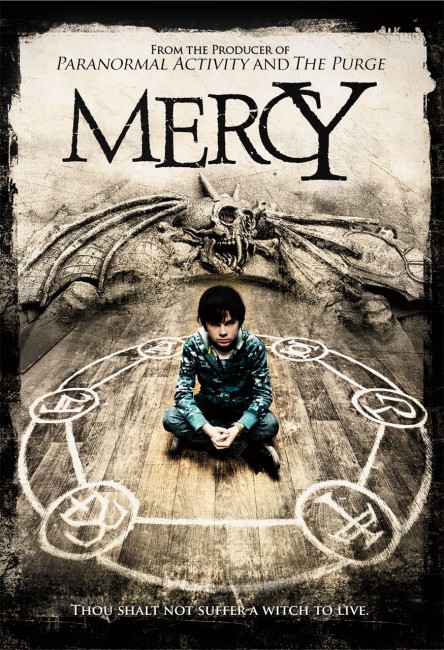 George, his older brother Buddy and mother Rebecca move to the small hometown of his ‘Gramma’ Mercy. Mercy has been thrown out of the geriatric home she was placed in and they need to tend her. George sees that the other residents of the home were fearful of Mercy. In their care, Mercy is difficult and uncontrollable. George sees that she hates the medication they give her and decides to substitute it for saline. George learns stories from the locals of how Mercy was barren and supposedly made a deal with Hastur, an entity that lives in the mountains, to have a child. This left her with powers as a witch. George believes that as she has become infirm, the evil influence is now coming to take her over. Left alone to tend Gramma while his mother takes Buddy to hospital, George faces the evil force as it takes possession of Mercy and is determined to sacrifice him.

Mercy was one of the films made by Jason Blum’s Blumhouse, just at the point they were moving from success with the Paranormal Activity and Insidious films and the first The Purge (2013) to becoming a major player in the horror genre. Director Peter Cornwell had previously appeared with the horror film The Haunting in Connecticut (2009). Almost all of Blumhouse’s films up to that point received theatrical releases but Mercy went directly to dvd.

The film is based on Gramma (1984), a short story by Stephen King. The story mostly consists of an extended scene with young George forced to stay at home tending his grandmother. In flashbacks, we discover her history as a witch and deal with the entity Hastur, before George realises that Gramma has died but he then enters the room to find her corpse reaching out to him. The story reaches an ambiguous end where George appears to have inherited some of Gramma’s powers or even be possessed by her. The short story was previously adapted as an episode of the tv series The Twilight Zone (1985-9) with Barret Oliver as George. The film expands on the story a good deal, although oddly what we don’t get is the scene with the dead grandmother that formed the centre point of the story.

Mercy is a low-expectation film but achieves its effect quite modestly. Gramma/Mercy is built up as someone the people around her are constantly suggesting is sinister in influence and power. The film gets great effect out of peripheral pieces – Mark Duplass telling the story of the other sibling who wanted to leave home and get married but was found in the forest with the husband dead and she up a tree in fear. Or of how the young Mercy went into the mountains and came back pregnant. (Here King and the film willingly borrows from H.P. Lovecraft for whom Hastur was an entity, although Lovecraft had in turn borrowed this from an Ambrose Bierce story). This is definitely not a predictable film. You are held to it simply out of wanting to know what is going on. The climactic scenes with young Chandler Riggs trapped in the house as the force controlling Shirley Knight prevents him from leaving and wants to drag him into an occult circle as a sacrifice is undeniably creepy.

The film gets great usage out of Shirley Knight, an actress who achieved some fame in the 1960s, including two Academy Award nominations and a host of Emmy nods and wins in later years, but has steadily appeared in a series of supporting parts, usually as mothers and grandmothers since then. Peter Cornwell builds up her presence with fearsome regard, as much by people whispering about her in her absence that by her actual appearances on screen.