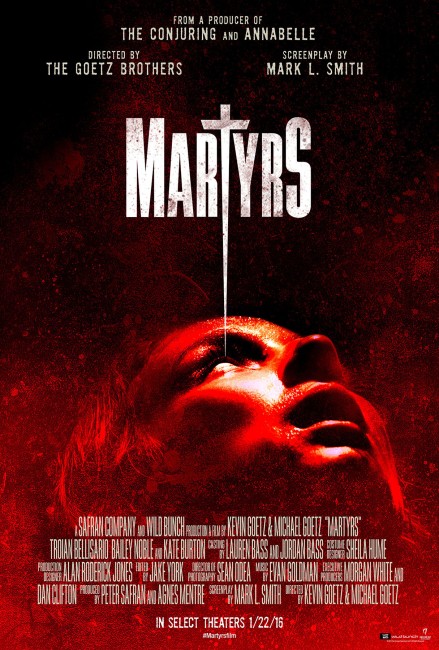 After escaping from a situation of horrible abuse, young Lucie is brought to an orphanage. There she befriends Anna, a girl her own age. Ten years later, Lucie bursts into a home and blows the family away with a shotgun. Lucie then calls Anna to come to the house. Anna is horrified at what Lucie has done, even though Lucie is certain that the family were the ones responsible for her abuse. Anna then discovers a secret compartment leading down to a complex beneath the house and is horrified to find others being kept prisoner there. Both of them are captured and forced to undergo torture. It is revealed that their captors are hoping to find one among them who will undergo martyrdom for their suffering and relay back evidence of an afterlife as they die.

This is an English-language remake. This is something that might be considered one of the all-time bad ideas up there alongside the Dino De Laurentiis remake of King Kong (1976), Jar-Jar Binks and the acting career of Pauly Shore. There have been a great many English-language remakes of foreign films – a trend that began in the 1960s with efforts like The Magnificent Seven (1960) and has become increasingly more commonplace since the late 1990s. There have been one or two of these that have not been too bad – The Ring (2002), The Departed (2006), The Girl with the Dragon Tattoo (2011) – and mostly a good number that have failed to come anywhere near their originals. There is however a special circle of hell reserved for those that so badly mangle everything about the original – efforts like The Vanishing (1993) and Diabolique (1996) – and rewrite shock endings for something happy and upbeat. It is somewhere down around here where Martyrs lies.

This version of Martyrs has been placed in the hands of brothers Kevin and Michael Goetz who had previously only directed the thriller Scenic Route (2013), although had earlier written the script for the sf disaster movie Tycus (1999). The remake had originally started out under Daniel Stamm, director of The Last Exorcism (2010), but he departed. This version is co-produced by Wild Bunch, the French production company behind the original, and Blumhouse, the production company of Jason Blum who has been behind a great many genre films in recent years with the likes of Paranormal Activity (2007), Insidious (2010) and The Purge (2013), all of which have produced multiple sequels, and others. (See below for Blumhouse’s other productions).

The Goetzs’ admitted up front that the remake would not be as extreme as the original. After hearing this, you sit down to watch the film wondering just what the point of it is. If you cut out most of what made the original effective and became its talking point why even conduct a remake at all? It is not as though there isn’t a market for something that approaches what the original did in terms of grimness as the popularity of the Saw sequels in recent years has demonstrated. Against this, the production of something so anodyne can only amount to a complete betrayal of the source material.

With the torture scenes watered down to the point of making almost no impact, all that that leaves you with is the script. However, this is handled with a stunning lack of adeptness of almost every level such that Pascal Laugier’s original twists pass without any effect. The scene where Lucie bursts in to blow away the family had some shock impact but is minimal in the replaying here. The scene where the figure attacking Lucie was revealed to only be in her head was a considerable jolt in Laugier’s hands but is repeated with zero effect.

There are other even worse changes – one of these is that both girls remain alive until the end, the upshot of which is that the film now gets the addition of a positive upbeat drama about Anna breaking back into the facility to rescue Lucie from her fate, charging through the complex in action heroine mode, blowing away cult members with a shotgun right and left. The other ridiculous change is that we are told what the cult are trying to achieve fairly early on during the imprisonment. Thus the revelation that the girls are being tortured to obtain evidence of the afterlife comes not as a stunning end of film revelation but serves to turn the piece into just another work about a crazy cult torturing people for some wacky idea.